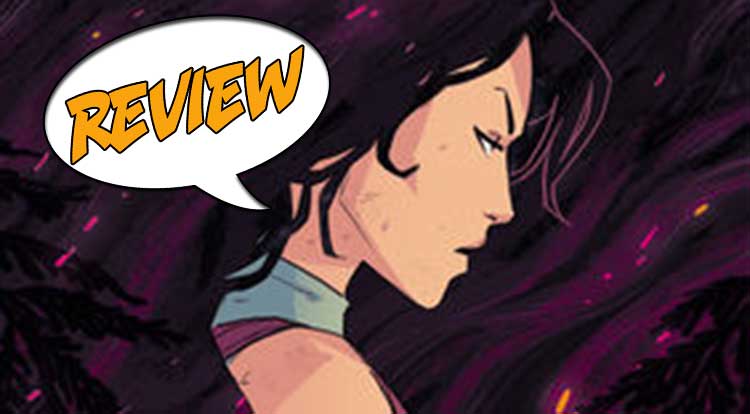 We join Lara at a pivotal moment where she faces up to her own past and her personal demons even as she descends deeper and deeper into the Temple of Eden in Tomb Raider: Inferno #3 from Dark Horse Comics. Previously in Tomb Raider: Inferno: Facing off against the Trinity organization is no one’s cup of tea unless you are Lara Croft – Tomb Raider!  Journeying to the Antarctic, Lara begins her descent into the bowels of the Temple of Eden.  In doing so, she falls into a trap and begins a frightening examination of her memories, her psyche and all the personal demons that haunt her.

THIS ISN’T YOUR MOTHER’S TOMB RAIDER

I’m not going to lie.  Tomb Raider: Inferno #3 isn’t an issue I enjoyed very much.  There are some effective moments, but overall, a story that spends its entire page count examining the entrails of the things that haunt Lara Croft doesn’t make for a very interesting read, at least for me.

We open with Lara descending deeper into herself, emerging as a teenage girl facing the butchered corpse of her father, and the guilt she apparently feels over his death.  We are treated to some confronting images as his corpse revives and blames her, the scene ending with Lara plunging a sharpened trowel into his arm.  The issue then skips through a variety of set piece images where Lara faces up to a number of guilty feelings she has over friends lost and people she has previously killed.  These scenes repeated during the course of Tomb Raider – Inferno #3, until Lara emerges back into the reality of the temple.

Reviewing an issue like this, where so little of actual consequence occurs, is made doubly difficult when you think about what the Tomb Raider comics should be.  Where’s the action, the excitement, the derring-do and dare-deviltry?  Where are the stakes for the character and the reader if it’s all happening in Lara’s head?  While it is unfair to expect the writers to cater to every whim and fancy I have about what I think a Tomb Raider comic should feature, if none of what we have come to expect features at all, what’s the point?

There are plenty of stories that use the trope of the interior journey.  Doctor Who did it back in the mid-70s, to dramatic effect.  Of course, the Matrix movies are all about journeying through a fantasy land.  What these two examples have in common that Tomb Raider – Inferno #3 doesn’t is the sense that failure for the lead characters will have real-world consequences.  There’s none of that in this issue for Lara.  She’s clearly suffered enough already, to have these images haunt her.  But the lack of impact, if she falls prey to them, means they have little to no heft for the reader.

All right, so that’s a lot of negative talk about the writing.  On the plus side, it is a brave move to devote an entire issue to this type of storytelling.  You cannot fault the writers for daring to do something like this.  And even if I personally think it didn’t work, that’s not to say you, the reader, won’t get a huge amount out of the imagery the writing conveys.  It’s just when you’ve seen it all before that you realize sometimes, it’s not for you anymore.

GOING TO TOWN ON THE ART

Artist Philip Sevy goes to town on the art in Tomb Raider: Inferno #3.  How could he not with the richness of imagery the story is conveying.  All limits are off when the character journeys through a mindscape.  Sevy’s linework is bold and strong and there are a number of single page scenes where the striking visuals are perfectly matched to Michael Atiyeh’s colors.

Of special note are several strikingly realized scenes, one including the bloody use of an ice-pick to the face.  Even more effective is where the ghosts of Croft’s past gather to drag her down into imaginary depths.  While the weak storytelling is a letdown, perversely, the imagery that the writing relies on to convey the story allows Sevy and Atiyeh to shine.

Tomb Raider: Inferno #3 is an issue your reviewer found hard to like.  The writing doesn’t quite hit the right mark, but it does allow the art side of the creative team to shine in a series of extravagant full-page images that fully plumb Lara’s memories and dreams.  I would hazard that this sort of issue is a once off, a clearing of the decks before we rejoin the real world action.  As such, I think it is a bold, if not quite successful experiment.  But where would we be, I suppose, if we did the same thing over and over again without trying something different to draw new readers into the genre?

Lara Croft goes deep into the Temple of Eden and goes deeper into her own psyche as she battles her personal demons.