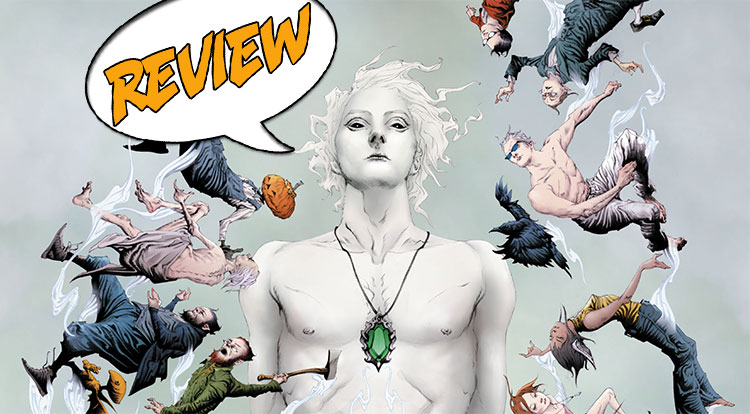 Neil Gaiman returns to one of his most popular creations as he handpicks a group of four authors to co-write a one-shot story which will carry into new titles under Vertigo’s Sandman Universe group. Is it a dream come true, or a nightmare in the making? Let’s find out in The Sandman Universe #1 from DC Vertigo. Previously in The Sandman Universe: In January of 1989, Neil Gaiman introduced the world to Dream of the Endless and his world. It ran for 75 issues and is still, to this day, a loved tale that transcends genre. While he has returned to the character several times since the original Vertigo series ended, he has now handpicked a group of writers to carry his characters on in a new series of books. The Sandman Universe is your introduction to those writers and the characters they will take into their charge.

Lucien, chief of staff and librarian in charge of the palace of Dream, walks along the shelves consisting of all the books ever written and all the books never written. He searches for a particular tome, but interrupted in his search by Mervyn, the groundskeeper for the palace of Dream. Things are amiss, cracks in the sky, changes occurring when none should be able, friends disappearing. The gathered myths and metaphors, occupants of the realm, ask Lucien to call upon Dream to deal with matters. Lucien explains Dream, Lord Daniel, is indisposed, gone on personal business. They insist something is amiss in The Dreaming. Lucien goes forth to call upon his lord. Meanwhile, the residents of The Dreaming ask for Matthew, the raven companion of Dream, to find his master. So starts a tale which has Matthew flying across the dreamscape and the waking world searching for the Lord of Dreams.

He follows his instinct and searches for a Dreamer who will awaken and take him out of The Dreaming, into the world where he may locate his master. Ironically, it is not as easy as it sounds. He is forbidden from awakening an elderly cancer patient by Dora, a woman with wings on her head and the ability to know the waking life of a dream’s dreamer. There is more to that tale, but it is not for now.

So Matthew flies on, finding an awakening dreamer in the form of young Tim Hunter, who has the magic ability he thought was secret until he finds someone knows. Does knowledge of his secret put him in danger? Matthew knows, but cannot act. He has another mission.

He flies across the world and lands in New Orleans, where a young girl comes out to her siblings and seeks acceptance. But the fickled nature of a child leads to trapped spirits being released and inserting themselves into the young family’s story. Still, they are not Matthews’s concern.

Now the raven companion of Dream finds himself in an abandoned bar, seeking an audience before the Prince of Hell; maybe he can point Matthew into the direction of his lost master? No, he is met with horror and captivity. Lucifer is in a hell of his own, preparing his own quest. He cannot help poor Matthew.

Without warning, Matthew finds himself drawn to a city, he feels his errant master. He closes in to find something is wrong, something is not as it should be. He is so close to his goal, but suddenly he seems to forget as if it was dew in the morning light.

Matthew returns to Lucien, only to discover the situation in the Dreaming is getting worse.  Not only is Lucien hiding a secret of his own, but we uncover another secret, one even more shocking, which may change everything.

The Sandman Universe is a beautifully written book. It is intended as a lead into a new series of Vertigo titles which will essentially constitute a Sandman Universe. Each of the movements in this book, and I call them movements because they have a musical quality about them, you are treated to a different creative team from each upcoming book. The four titles, The Dreaming, The House of Whispers, Lucifer, and the Books of Magic, are represented here. In the overall framing story, Simon Spurrier (Coda, Six-Gun Gorilla) reveals there is a problem in the Dreaming, and it is affecting the very fabric of the realm. Matthew’s second stop on his search finds Tim Hunter, who will be in a new Books of Magic title written by novelist Kat Howard (Roses and Rot, An Unkindness of Magicians). Tim meets the mysterious teacher Dr. Rose, who has knowledge of his magical prowess, but what are her intentions? The tale of the young sisters in New Orleans will continue in The House Of Whispers by novelist Nalo Hopkins (Sister Mine, Brown Girl in the Ring). When Ezrulie returns to the House of Whispers, how will the lives of Latoya, Maggie, Lumi, and Habibi be affected? And what part does Uncle Monday play in the story? Finally, Dan Watters (Limbo, The Shadow) takes on Lucifer. The Prince of Hell prepares for a mission which will find him once again cast down, but what kind of Hell can the Prince of Lies be trapped in?

This book covers a lot of ground in a short time, giving you little glimpses into the upcoming titles in a way that adds to the story of each. Much like the original Sandman series itself, this book is different, taking different feels as each creative team contributes to their own little chapter of Matthews journey. While the overall story was plotted by Neil Gaiman, and co-written by the four writers, Gaiman himself handpicked them for this endeavor. The title reads like vintage Sandman, and feels like a warm blanket on a cold night.

BOTTOM LINE: THE SANDMAN UNIVERSE #1 IS A LUCID DREAM FOR YOUR PHYSICAL AWAKENING