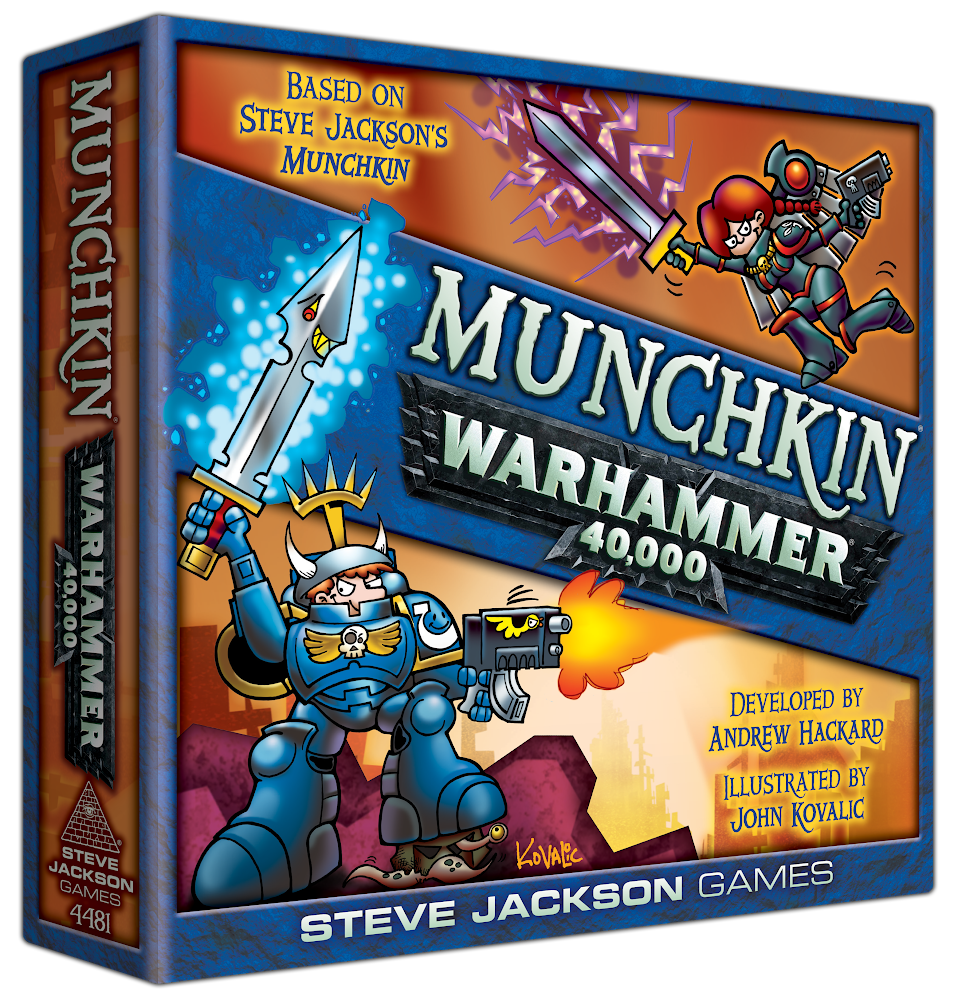 This past week at Gen Con 2018, Steve Jackson Games announced not one, but TWO new Munchkin Games. First up is Munchkin Crazy Cooks, a Deluxe-format game that will arrive in mid-September ONLY at Barnes & Noble.

Your dwarf, elf, or halfling has hung up their axe, bow, or sword and gone to culinary school to become a BBQ Boss, a Short Order Cook, a snooty French Chef, or even an ultramodern Science Chef. In the process, they’ve learned that the kitchen is just as dangerous as the dungeon.

Perhaps the bigger announcement is the coming release of Munchkin Warhammer 40,000 that will arrive in early 2019.

Choose an Army: Ultramarine, Necron, Aeldari, Ork, Death Guard, or Tyranid. Make a Pilgrimage to Holy Terra, use your Lasblaster, and of course you need More Dakka! Be vigilant; you might encounter the Sloppity Bilepiper, a Horror of Tzeentch, or even Mortarion himself! John Kovalic returns as the artist for both games.

There are three takeaways from this announcement that I find most interesting – first, Steve JacGamesGmaes favors the Deluxe-format game over the basic set we’ve all come to love over the years. I can understand this move, as the board and character tokens make it easier to keep track of progress as you play the game. It is unfortunate that the expansion comes with a huge jump in price, though.

The second takeaway is that Steve Jackson Games is still willing to work on releasing exclusive games through various outlets. In this case, Crazy Cooks at Barnes & Noble, but we’ve seen other exclusive games land at Target and Walgreens stores. This is a pretty cool practice that has worked for toy manufacturers and others for decades, so why shouldn’t game makers get in on this? This also creates another meta-meaning behind the term Munchkin and those who have to collect them all.

The final takeaway from these two announcements is that Steve Jackson Games is not relying only on Kickstarter for its games releases. For the last year, SJG has launched a number of Munchkin Kickstarter campaigns that had me thinking this would be the route the company would take for all future releases. Hopefully, these two new games give Steve Jackson Games the ability to use multiple outlets to raise money to release new games.

What are your thoughts on these two new Munchkin releases? I have a feeling there will be a lot of people who are interested in the Munchkin Warhammer 40,000 release next year.