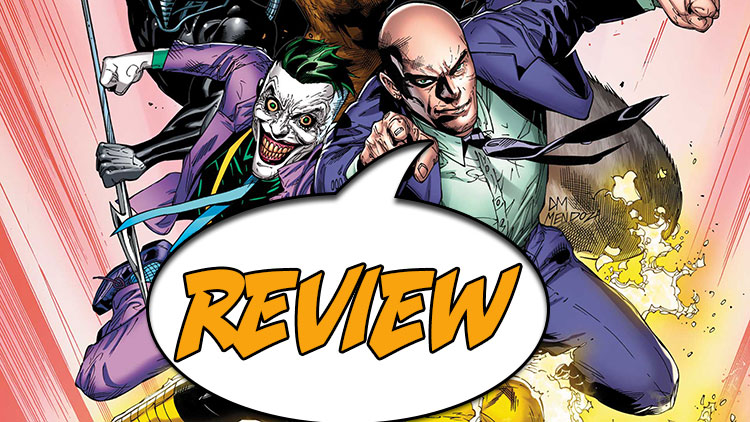 This may be the beginning of the end for Earth, but right now the question is, “Just what is Lex Luthor up to?” Let’s find out in Justice League #5 from DC Comics. Previously in Justice League: The threads of the plot have converged as Lex Luthor and his Legion of Doom have systematically split up our heroes and incapacitated them. The Still Force has been activated. The sentient star Umbrax is looking to gather Earth to it. Lex Luthor and the Joker have taken over the minds and bodies of Superman and J’onn J’onzz and the multiverse is within their grasp!

JUST WHAT IS LEX LUTHOR UP TO?

Justice League #5 is a complete change in pace. Our heroes are not really part of the picture; instead, we’re finally learning about what Lex Luthor is doing. It makes the pacing seem a bit slow, but it does help clear up some of the confusion. The story starts out with cameos of villainous DC characters as they feel that there has been a change in the world. Then we flash to the Arsenal, where Luthor has picked up some special object. Another change of scene, to the recent past, at the Source Wall, where Luthor makes a deal with Sinestro.

Finally, we get to his story. From the days of Justice League: No Justice, he had learned that being a hero was meaningless. He also wanted to travel in time. He does so, traveling a million years into the future to Lexor City, a place featuring an enormous statue of him. Some of the inhabitants meet him and talk with him. In short, instead of people trying to be better versions of themselves, they followed the words of Luthor, embraced who they really were, stopped trying to be superheroes, and conquered the universe in his name. And then they tell him he’s known as the “Great Tragedy,” because he missed the key to unlocking the great truth of the universe in his own time.

Naturally, this infuriates him. We find that he is now telling his story to Grodd, and gets to the good part (especially to Grodd) – stopping the Speed Force. Luthor went looking for what he might have missed in his own time, which takes us to the Legionnaire’s Club he blew up a few issues ago. He found the door no one else could see, which led to a secret basement chamber where there were papers describing the totality, and the power of Doom (contained in the doorknob with the symbol on it). He also learned how he could unlock the Ultraviolet Spectrum, and the Still Force, etc., and he started planning who would most appropriately wield those forces for his great plan.

At the heart of this issue, there’s actually a pretty deep philosophical question, which is why should anyone be better than their nature? Through Luthor’s telling, that inner nature is selfish and vindictive, and he encourages everyone to give in to it and join him. I don’t know if this is intentional or not, but in the greater story, the Still Force has been released. This chapter of the story has a very still quality to it. It is as though we take a few moments of time, out of all the chaos of the universe, to see this pointed and methodical journey to where we are right now. There is no fight. There is no frantic action. There is just a moment of calm that feels like the calm before the storm.

THROUGH THE UNIVERSE WITH LUTHOR

The art in Justice League #5 is solid. This story is all about Lex and his travels through space and time to figure out what the people of the far future had figured out. I like how he maintains a sort of casual, dispassionate demeanor no matter where he is. He looks at home in his suit and tie regardless of the actual setting. We see the flash of rage across his face when he realizes there is something he does not know, but he pulls it back and controls it. I think this is one of the things that makes Lex Luthor a great villain – his focus.

He is the point of calm in all the craziness that is happening around him.  In the far future, people with superpowers appear to be fighting all over Lexor City. When he is talking to Grodd, the United Nations are in chaos. He is the catalyst. And right now, he is piloting Superman as he would pilot any ship. The last panel, of Superman, is quite powerful. We obviously recognize him, but the absolute absence of emotion from his face is quite chilling.

BOTTOM LINE: A PAUSE TO CATCH UP

Because Justice League #5 is such a contrast to the earlier issues, I think there’s more happening that it seems at first. One of the challenges of telling such an epic story is that while there are so many characters involved over such a wide area, there are only so many pages per month in which to tell it. This plot is so complicated that we need to take a time out to see what the other side is up to. It is interesting, but there are flashes where, for me, the logic doesn’t completely hold up. For example, human beings are historically so diverse in thought that it is difficult for me to believe that in the far future, everyone has decided upon a single philosophy. At any rate, this issue does clarify some of what is going on.

Spending some time in the machinations of Lex Luthor’s mind straightens out the plot.