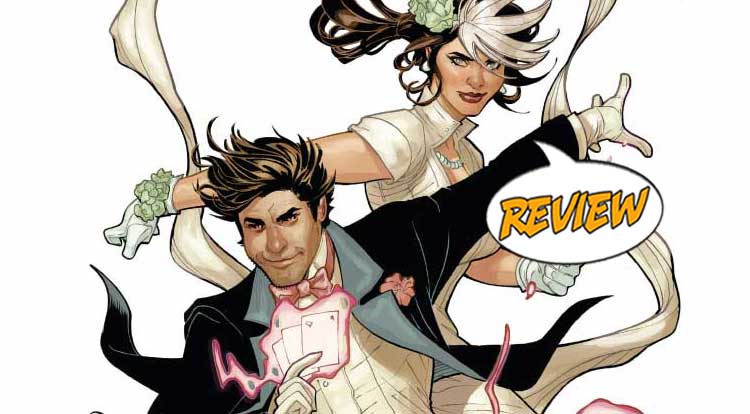 The big X-Men wedding has come and gone, but the bride & groom aren’t who we thought. Your Major Spoilers review of Mr. And Mrs. X #1 awaits! Previously in Mr. and Mrs. X: To the surprise of everyone, the Marvel Universe’s hottest couple has finally tied the knot! In their extraordinary lives, they’ve faced nearly every challenge imaginable, but how will they fare against former flames making trouble? An entire galaxy in jeopardy

ROGUE AND GAMBIT GET THEIR OWN ONGOING!

Having not read the big X-Men wedding issue, I was a little surprised to open this book and find it showing the behind-the-scenes stuff of the big moment, including the X-Men splitting off into team Rogue and team Gambit, some lovely back-and-forth dialogue and Jubilee WAAAY too into it all.  Rogue even manages to dig up a power-dampening collar so that she can bet a kiss on her wedding day (and some other stuff on her wedding night), while a dozen or more friends make their cameos.  It’s classic old-school X-Men stuff, leading to the most touching bit of all, as one of the guests suddenly reveals herself to be… Mystique, Rogue’s mom.  After the ceremony, they take off on Gambit’s impromptu honeymoon in outer space and things get a little too personal for my tastes.  That gets interrupted by X-Men ramrod Kitty Pryde with an emergency mission in outer space, leading to Rogue ending up stuck outside the ship and a couple of surprising guest-stars.

CLASSIC X-MEN INTERPERSONAL STUFF WITH A SIDE OF COSMIC

It’s been a long time since I’ve read X-Men comics regularly, but this book is going on my pull list immediately based on the strength of this story.  The focus on the personalities not only of our lead heroes but all their various X-buds is wonderful, and I enjoyed seeing Iceman, Nightcrawler and others getting a quick moment in the sun, as well as the return of the long-lost Cerise, once of Excalibur.  There’s even an extended honeymoon sequence where Rogue and Gambit are naked for several pages that doesn’t feel awkward or prurient, instead coming across as really sweet (except for Gambit’s sheet dropping while on the video phone with Kitty, but you can’t completely un-dirtbag him all at once.)  Even the appearance of a super-popular final page guest star doesn’t worry me about the story, and the art is really strong.  Once Mr. and Mrs. X go into action, the art team really gets to shine, especially in the panel where Gambit leaps out and throws his cards directly at the reader.  Parts of the art remind me a bit of Chris Bachalo, but with much more realistic proportions and facial expressions, making for some really attractive pages.

With this book, X-Men Red and the new X-23 solo book, I’m following more X-Men titles than I have in years, but I don’t think I’m going to regret it.  Mr. and Mrs. X #1 takes two long-established characters and puts them in a whole new situation with some lovely art and a complex, emotionally engaging story, earning a well-deserved 4 out of 5 stars overall.  With so many heroes losing their marriages due to editorial interference or inflexible creator mindsets, it’s nice to see marriage treated as the beginning of a NEW adventure, and not the end of all fun.

Feels like classic Claremont X-adventure with some sweet family moments, some action-adventure and romance. Plus: The Imperial Guard!