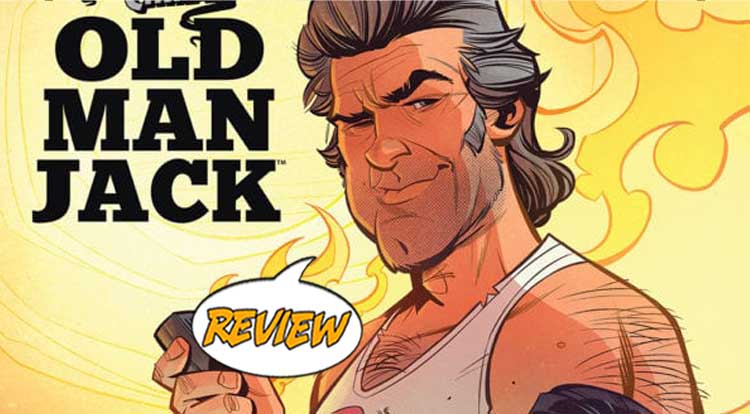 Jack must atone for his sins if he’s ever going to be able to stop Lo Pan’s wrath.  Your Major Spoilers review of Big Trouble In Little China: Old Man Jack #11 awaits! Previously in Big Trouble In Little China: Old Man Jack: The year is 2020, and hell is literally on Earth.  Ching Dai, sick of relying on screw-ups like Lo Pan to do his bidding, has broken the barriers between Earth and the infinite hells, and declared himself ruler of all.  Sixty-year-old Jack Burton is alone in a tiny corner of Florida with only his broken radio to talk to, until one day it manages to pick up a message.  Someone is out there in the hellscape, and they know a way to stop Ching Dai.

“WHY IS HEAVEN FULL OF NERDS?”

This issue starts on the slopes of Heaven itself, as Jack discovers that his most beloved friend has also made it to the afterlife: His truck!  Of course, that might not be any help, since David Lo Pan has even more power than he had back in the 80s when they clashed the first time.  Of course, Jack has a few friends of the human variety, including Gracie Law, who has her own .44 Magnum, demon killer edition.  The first attempt to raise an army goes badly (Joan of Arc was promised cake) but Jack pulls a Hail Mary, quite literally, making a deal to get him a little bit of magic that will allow him to meet Lo Pan head on, one on one.  This seems like a really bad idea at first, but it becomes clear that it’s a really, phenomenally, COSMICALLY bad idea in practice.  That’s when Eddie shows up with not one, but TWO supporting armies on Old Man Jack’s side, leaving Burton to smirk, “You’re in BIG TROUBLE!”

I’m not the fan of the original ‘Big Trouble In Little China’ movie that Major Spoilers EiC Stephen is, but that doesn’t hurt my enjoyment of this issue one bit.  In fact, having characters reminding Jack of who they are because he’s an old man now and was never particularly bright in the first place becomes a nice running gag throughout the story, and the stylized, energetic art precludes any possible likeness issues.  This isn’t Kurt Russell, necessarily, but it’s still recognizably Jack Burton in visual and in dialogue, and the art makes for some really fun moments.  The sight of Jack storming the gates of Heaven in his Freightliner is impressive, and I felt bad when the Porkchop Express got devastated by Lo Pan’s powers.  This art actually reminds me a bit of John Layman’s work on ‘Chew’, with a loose, almost cartoony body language and facial expressions make for an enjoyable visual experience.

BOTTOM LINE: A NICE SETUP FOR A BIG NEXT (FINAL?) CHAPTER

Picking up the threads of a cult classic thirty-three years after the fact will always be a complicated task, but this issue handles its story really well, making Big Trouble In Little China: Old Man Jack #11 a surprise for me, but with strong, unique art and a clever story that has the Burton voice down pat, it pulls it off, earning 3.5 out of 5 stars overall.  I’m actually wanting to go back and read the build-up to this issue and then come back for the big final chapter next time around.

Jack Burton in the afterlife, with armies on all sides, demons and angels and floating goldfish and a lot of sound and fury... A good read!