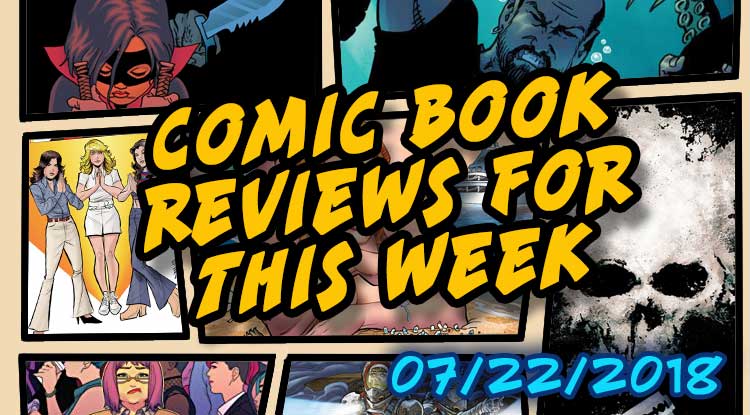 If you like a little noir with your mysticism, Bone Parish #1 with not disappoint. Bunn and company lead you into a world of drugs and family, with a major twist. This first issue takes a well-used story and turns it on its head, delivering genuine surprises and drama. The story of the Winters family has the potential to be a major league tale. – Stacy Baugher Charlie’s Angels #2 is still fairly light-hearted, but there actually is a decent amount of plot to mine, and there is something kind of fun about a setting which is modern, yet lower tech than the present day. It isn’t quite so over-the-top as the first issue, but for settling into the plot, it is comfortable and it moves along nicely. – Ingrid Lind-Jahn An anthology is, by definition, gonna be a mixed bag, but the recurring theme in these stories is darkness, a bleak outlook and a lot of cynicism. I kind of liked the Giganta story, but I also don’t ever want to read it again, and it’s the best part of this book. I don’t recommend this, it’s just over-the-top disturbing, what the kids call “edgelord”, I believe. – Matthew Peterson

The idea behind this book is fantastic, as it offers a number of stories to keep reading again and again. On the downside, there are some very dark and disturbing stories here as well. – Stephen Schleicher Eden #1 (of 4) is a great read. Its action packed and the strong female lead is refreshing. If you can give it time to percolate, it looks like it will be a great story that will entertain on multiple levels. – Stacy Baugher Future Quest Presents #12 is a fun, exciting bit of action-adventure which finally gets Buzz and Frankie to the status quo of their 1960s cartoon adventures, but does so in a way that makes perfect story sense and looks really great doing so, earning 3.5 out of 5 stars overall. Like a wise man with white skin once said, if ya gotta go… Go with a smile! I just hope this isn’t the last we see of the world of Future Quest. – Matthew Peterson It’s not often you come cold to a story arc as I did and immediately submerge into the storyline, but Hit-Girl #6 hit all the right buttons for me. I’m looking forward in eagerness for issue 7. – Robert Mammone When I read the first issue of Ice Cream Man, I knew we’d be talking about it for a while, and while I’m still in the dark on the title character’s true nature, the build-up is worth reading every month. Ice Cream Man #5 is a horror comic in the old E.C. tradition, with bleak humor throughout and a really shocking moment on the final page that raises tons of questions and makes me want to read next issue RIGHT NOW, earning 4 out of 5 stars overall. There’s something about a really well-crafted, inexplicable story of the unknown bringing terrible things, and this is an excellent example of contemporary horror with a strange metatextual edge. – Matthew Peterson Here’s the thing: It’s hard to do multiple artists in a single story and make it all coherent as a single story. The Immortal Hulk #3 not only pulls off that difficult trick, it manages to inject a little humor, a little pathos and a little more of the ongoing mystery into a clever, well-balanced issue that earns a solidly impressive 4.5 out of 5 stars overall. This book’s run of excellent, thought-provoking tales continues, and the promise of Sasquatch next time has me wondering what else is up this creative team’s sleeve. – Matthew Peterson Jim Henson’s Labyrinth: Coronation #5 is definitely not a jumping on point, but I find it rather darkly satisfying. We know where the plot is going, and now we can start wondering more how we get to the end point. (Remember – we already know Jareth get stuck here and becomes the Goblin King.) But now we also find out that the book as something to say about human emotion which makes it ever so much more interesting. – Ingrid Lind-Jahn Despite some issues, both in the writing and the art, Justice League Dark looks like it will most likely evolve into a must buy. Right now, there are just a few issues you may want to know about going it. However, the portrayal of several characters, Detective Chimp and Kirk Langstrom especially, is a treat and worth your time. Hopefully, the rest of the book will catch up with them. – Stacy Baugher Reading Mage Book Three: The Hero Denied #10 is watching a master artist engaging in a labor of love, making the quiet preparations for the third act of this tale into compelling reading, introducing important elements (and a couple of mysteries) and looking really good doing so, earning a well-deserved 4 out of 5 stars overall. (I only hope that Kevin’s third arc ends as well as the first two, because I don’t know if you’ve noticed, but ‘The Hero Denied’ is a really ominous title.) – Matthew Peterson What an interesting setting for a heist! And based on the books that the team is looking for, there are distinct hints of interesting things to come. I loved Real Science Adventures: The Nicodemus Job #1, and applaud the creative team’s decision to go for 11th-century science fiction. I can’t wait to see what they‘ve got in store for us. – Ingrid Lind-Jahn I really wanted to like The Realm #8. The cover, by Jeremy Haun & Nick Filardi is intriguing and monstrous. There are elements in the issue that with just a bit more…something could’ve worked really well. The coloring just didn’t do it for me. Of course, my opinion is exactly that. I’m sure there are readers out there who have lapped this series up from issue one, and for that, I can only salute you. And, if you’re wanting a hit of the really good stuff, you’ll excuse the cross-promotion, but Major Spoilers has this fantastic gaming podcast called Critical Hit you really should have a listen to… – Robert Mammone If there’s a failing in this issue, it’s that the focus on internal turmoil and emotional moments can make it feel like nothing of importance happened, but there’s important moments for Gert, for Chase and especially for Victor which seem designed to set up what will happen next. Runaways #11 has lovely art, some strong character moments and finally an answer about Klara (with the added bonus of her not coming back to the team), earning a better than average 3.5 out of 5 stars overall. It’s the kind of comic that makes for a charming palette cleanser before the next big fighty-fighty mess, but here’s hoping Victor gets a body again soon. – Matthew Peterson