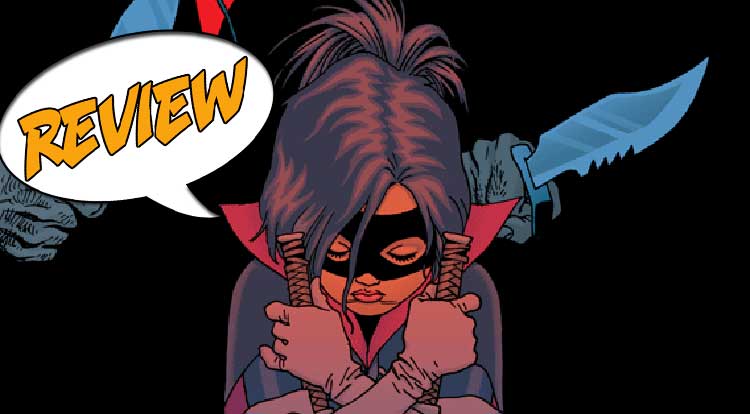 Hit-Girl #6 opens with our psychotic heroine caught by the foot in a bear trap, menaced by a bear, with the body of her latest victim lying nearby.  Find out how she escapes and the mayhem that then ensues in Hit-Girl #6 from Image Comics. Previously in Hit-Girl: Welcome to the Great White North as the new creative team of Jeff Lemire and Eduardo Risso continue Hit-Girl’s odyssey across the globe.  Next stop – Canada!  Having shot her latest target dead, Hit-Girl faces off against a black bear and a mysterious trapper, while drug dealer Boss Baker gathers a posse as hunts the greatest prey – human!

A girl enters a snowbound forest, armed with twin katanas, a handgun and a bowie knife, in search of a drug dealer to kill, might sound like the start to the worst joke ever.  Happily, it is actually the rough plot of a new Hit-Girl arc, written by Jeff Lemire with artwork by Eduardo Risso.  I’ll be upfront and say I loved this issue – it is well paced, with smart use of flashbacks and some very good characterization and ends on a very promising cliffhanger.

Hit-Girl #6 begins where the last issue ended; with Hit-Girl snared by the ankle in a trap, and facing off against a very angry, very bearish bear.  A trapper’s arrival scares the bear away, and he releases Hit-Girl, taking her in to recover from her injuries.  Meanwhile, the father of the man she killed, a drug boss named Baker, has blown into town with a bagful of cash, a truck full of guns, and a hankering to kill Hit-Girl.

Writer Jeff Lemire has written a pacey story that does a number of things well at several levels.  Hit-Girl is typically mouthy, a precocious killing machine who doesn’t know how to stop.  Lemire uses flashbacks to bring her father, Big Daddy, back into the story, and we see some rare vulnerability from Hit-Girl.  Pairing Hit-Girl with the trapper who saved her works very well; Hit-Girl mouthy and profane, the trapper stoic and silent in the face of her tirades.  There’s even a hint of the supernatural in the early section of the book, which only adds to the mystery.

The real enjoyment of the story comes from its pacing.  Lemire never lingers too long in a scene, allowing the reader just enough information to keep them interested, then moving to the next scene.  The introduction of the drug boss comes at just the right moment, allowing the story to pivot and move towards the cliffhanger.  The characterization is very good, and the dialogue believable (well, as believable as you can get where the lead character is a twelve-year-old vigilante) and with enough spark to pull the reader into the story.

The real hero of Hit-Girl #6 is artist Eduardo Risso.  In concert with colorist Patricia Mulvihill, Risso’s smooth line work and composition are a treat to watch.  The eye lingers on and moves naturally around the page.  Often you will see panels within panels, giving a density to the artwork that underscores the writing.  The artwork seems almost effortless, which just indicates the skill and hard work Risso brings to the issue

As I said earlier, Hit-Girl #6 is a great read and a visual treat.  The visual pyrotechnics one expects from Hit-Girl are largely absent, which works to its favor as it catches its breath after the first issue in the arc.  The characters are well drawn and while mostly the sort of people you wouldn’t have a drink with; bring different elements to the story that are woven into an entertaining hole.

It’s not often you come cold to a story arc as I did and immediately submerge into the storyline, but Hit-Girl #6 hit all the right buttons for me.  I’m looking forward in eagerness for issue 7.

The World’s Deadliest Tween Superhero vs the Great White North in this knock ‘em down, stand ‘em up, then knock ‘em down again slugfest!