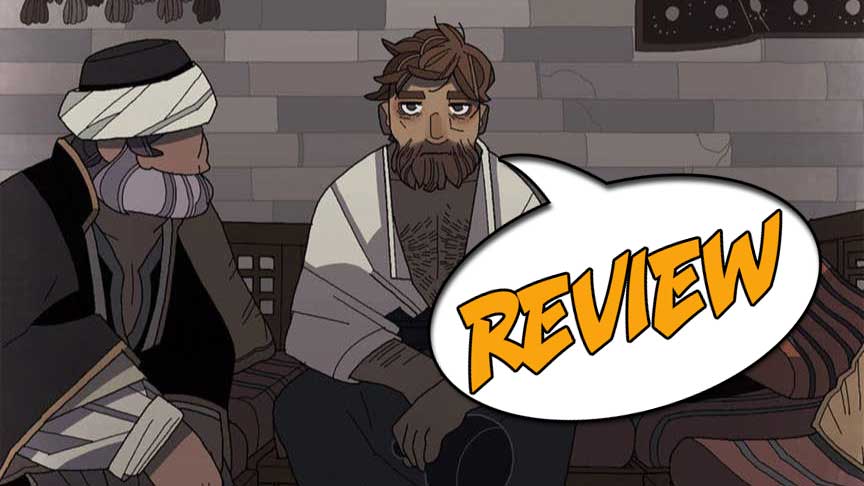 The year – 1095 CE. The place – Constantinople. The job – a heist! The technology – we don’t know yet, but I can’t wait to find out in Real Science Adventures: The Nicodemus Job #1 from IDW Publishing. Nicolas Fardas was an advocatus (basically, the law) until he exposed a higher-up (Terazin Berikos) for corruption. Berikos turned the tables on him, and Fardas was accused instead. He lost his job and has been drinking his life away, until the opportunity for revenge comes along…

Real Science Adventures: The Nicodemus Job #1 takes place in Constantinople on the eve of the First Crusade. This is such a fascinating place and time – this was the biggest, richest city in Europe at the time, a real cosmopolitan crossroads. We find our main character, Nicolas Fardas, as the merchant Archimedes Vasilikas finds him, lounging around and drinking wine. Vasilikas has had four rare texts stolen from him and wants Fardas to steal them back. Fardas waves this off until he finds out that behind this theft is Terazin Berikos, the man who ruined him. Vasilikas believes that the man who brought Berikos’ corruption to light is the man who can help him get his family treasures back.

Next, we follow a woman on the streets of Constantinople. She deftly picks pockets until Nicolas grabs her wrist. This is Sofana. She and Nicolas know each other, and he wants her to help him. They have a history, but she has given up on him. At least she has until she finds out who they’re after. He needs a team, but he can’t do the job at all without her, so this all pivots on her response. Guys, this is a heist story!

In short order, we meet Palatina, a young thief who learned many of her skills under Sofana, and Iskander, a scribe. (Remember – 1095 CE. There aren’t computers, but there may be paperwork – even forgeries – needed, not to mention just plain information gathering the old fashioned way.) Finally, we meet Emir, the warrior, in a charming scene where he saves his neighborhood from a gang trying to run a protection racket.

Berikos is now the Chief Librarian. He had basically been a corrupt cop before, so why the job switch? What is in it for him? This story takes place in a day and age where books are not mass produced. A rare book is very rare indeed. A library, such as the Great Library at Alexandria, would grow its collection by borrowing books and having scribes make copies. Traditionally, the library returned these texts to their owners. But Berikos has turned the system on its head. He demands the rare books for the Library in Constantinople and offers to rent them back to their owners. If they fail to pay up, it’s considered a crime against the Emperor himself, and their property can be confiscated. In other words, he’s not just sitting around shushing noisy readers, he’s running an extortion racket on a grand scale.

The job won’t be easy. They’re looking for four specific books, and who knows where they’re located. The Library is considered the Emperor’s property, so the Imperial Guard patrols it. The walls are like those of a fortress. The few entrances are well-lit, and the Library is populated by scholars. If they get caught, they’re as good as dead.

ANOTHER TIME, AN INTERESTING PLACE

Real Science Adventures: The Nicodemus Job #1 is drawn with the rather simple, somewhat exaggerated, line style that is used in the Atomic Robo world. There’s nothing wrong with that. People’s eyes sometimes look a little far apart, and long shots can be fairly minimalistic. That said, the composition is good, the expressions are great, and a lot of care is being taken with the setting. I love the costumes. Constantinople (present-day Istanbul) was the capitol of the Roman Empire at this time, but it was a crossroads of trade and culture. It looks like we’re set in the near east, which is not something we see all the time.

Each character is distinctive, and seems to have a color associated with them, which further helps us keep them straight. It flows well. Palatina is an acrobatic thief, and the scenes of her escaping with her loot are fun. (There is also a bonus story about how Sofana and Palatina met, which is absolutely charming.)

BOTTOM LINE: IF YOU LOVE A HEIST, THIS BOOK LOOKS PROMISING

What an interesting setting for a heist! And based on the books that the team is looking for, there are distinct hints of interesting things to come. I loved Real Science Adventures: The Nicodemus Job #1, and applaud the creative team’s decision to go for 11th-century science fiction. I can’t wait to see what they‘ve got in store for us.

Real Science Adventures set in a cool place and time and with a heist? Shut up and take my money!