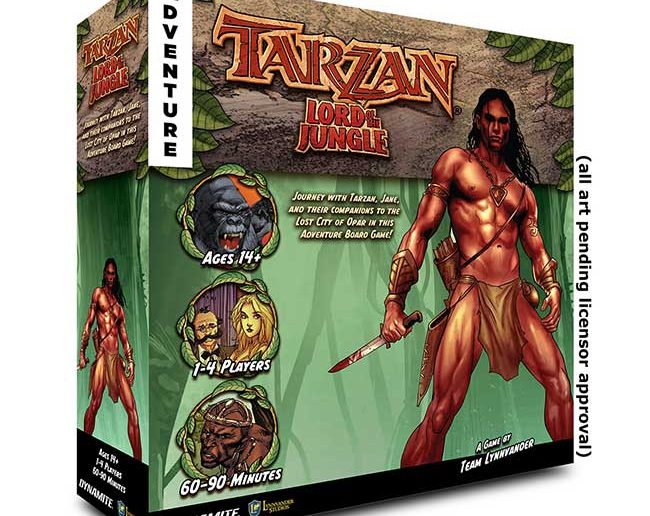 Dynamite Entertainment and Edgar Rice Burroughs Inc. are pleased to announce a partnership with Lynnvander Studios to create the next phase in Tarzan’s legendary history; a new board game starring Tarzan, Jane, and the rest of his friends and foes as an epic, playable adventure! Today, Dynamite Entertainment and Lynnvander Studios will offer this exciting game for pre-order on Kickstarter where gamers and Tarzan fans will get their first opportunity to see this thrilling game in action.

Tarzan is a fictional/literary character created by Edgar Rice Burroughs. Lord & Lady Greystoke were marooned on the coast of Africa. Alone and expecting their first child, they headed inland to the heart of darkest Africa. Lady Greystoke dies in childbirth and Lord Greystoke is soon killed by the Mangani Ape Tribe who adopt the Greystokes son and raise him as one of their own. Now grown into a man, Tarzan is a brave and cunning warrior, using his skills and knowledge of the island to protect the animals and himself from other humans who would seek to exploit the isolated land. First appearing in 1912 as a serialized magazine story, Tarzan was later published as a series of novels which was eventually adapted into nearly all forms of media including movies, television, and even comic books which are currently being published by Dynamite Entertainment under the name Lord of the Jungle and the Tarzan/Red Sonja crossover. TARZAN® and Edgar Rice Burroughs® are owned by Edgar Rice Burroughs, Inc. and used by permission.

Tarzan is a co-operative, choose-your-own-adventure-style tactics board game where you play as Tarzan, Jane, Cecil, Lt D’Arnot, Chowombi, and more, in an attempt to get Jane to her destination safely. Many enemies are trying to stop you from achieving your goals and you have only a few days and nights to get to your destination. Using the trees as “tools”, you and your friends unleash the power of the jungle to take-down the colonials with the help of your human and ape allies, while collecting items and renown!

“Tarzan has always been synonymous with adventure and that makes it an ideal subject for a game.” says Jay Spence, Director of Product Development for Dynamite Entertainment. “We like to make games that feel as fun and exciting as the comic books, and our comics of Tarzan have always been focused on excitement and adventure, so we’re eager to show gamers what it’s like to play the role of Tarzan.” Production on the Tarzan: Lord of the Jungle board game is currently near completion, with an expected shipping date of late 2018. The game will also debut at this year’s GenCon, in Indianapolis, where it will be available for demo with Lynnvander Studios.

• A varied collection of villains and allies to encounter