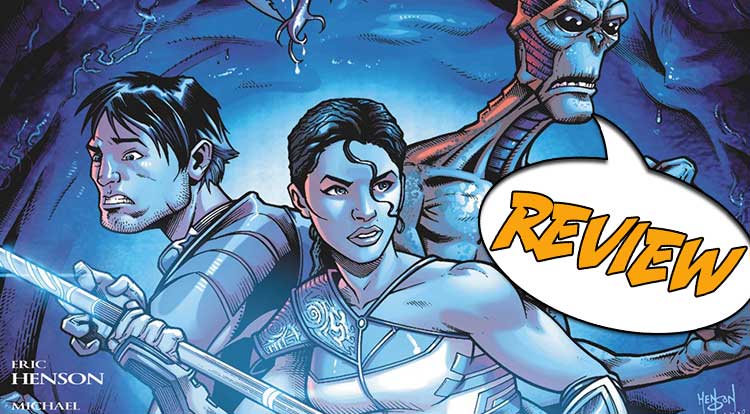 In the far future, an alien race has conquered the Earth. The planet Eden offers a safe haven, but is it really as safe as it seems, or is there a dark secret being hidden? Find out in Eric Henson’s Eden #1 (of 4) from Alterna Comics! Previously in Eden: Brigadier General Neriah Willis ship crash-landed on the planet of Eden, and before she could regain consciousness, someone came and took her child and the remains of the ship. Neria and her companions, Christian and Kla’Tuu, have ventured into the capitol city of Ca’Thone to find her son’s trail, but they are being pursued by an unknown faction, intent on stopping her from finding her son.

NOT WITHOUT MY SON

Our adventure starts with Neriah and her friends preparing to breach what looks to be a living barrier as they attempt to track down Neriah’s son, Avion. The barrier, seemingly made of faces of various alien races, can only be opened by a member of the Sylth race. Luckily, Kla’Tuu just happens to be a member of said race, and can converse with the “beings” who make up the wall. Kla’Tuu is successful, but Neriah knows that there will be a price to pay in the future for their passage. It’s right about then that the purple-worm-looking creature bursts through the ground and swallows them, giving them their passage to the Forbidden Territory where they believe the General’s son is.

In the belly of the beast, they face a new foe as a companion is injured. Things continue to get to go pear-shaped as the person who kidnapped her son arrives, and proves to be nigh unstoppable. But he is just a foot soldier to a greater enemy, one which Neriah and friends will have to conquer as they purse her son.

Above ground, a mysterious figure converses with the living barrier. This figure is responsible for the abduction, and hints that he has great need of the boy, but not of his mother. It looks like Neriah, Christian and Kla’Tuu have only just begun their fight to save young Avion.

Creator, Writer, and Artist Eric Henson (The Perhapanaunts: Danger Down Under, The Diplomat) introduces us to the world of Eden the old fashioned way, he drops you in the story and catches you up as he goes. Despite how it sounds, it’s akin to coming into a movie during the second act, right about when the action is starting. In many cases it makes for a confusing ride, but here it works, essentially. The crashing of the ship, the discovery of the missing child, the reason they were in the space above Eden, who her companions are, none of that is explained. Instead, you learn what you need to know organically, as the story unfolds. Yes, Earth has been conquered by a brutal alien race. Yes, Neriah is a military general with a past history of extreme violence. Yes, Christian is something of a whiner. Yes, Kla’Tuu is kinda freaky looking. But does the lack of knowledge in any of these areas make for a diminished experience? No. This is a woman who is out to find her son, which is the story. While there may be a greater conspiracy behind the abduction, it does not affect the story… yet. This is a woman of great ability using those abilities to hack, slash, and blast her way through whatever is standing between her and her child, the rest is just window dressing. But, it’s not perfect. There feels like there is a deeper world surrounding our heroes, but we get just what we need to move the story along. The mythology of the world seems rich, and I hope we get a little more time to explore it later.

Eric Henson is not only the creator and writer of this tale, but he is also the artist. His pencils give the solid ground work for Michael Babinski (JSA VS. Kobra, Scarlet Spider) to lay down his ink. Henson is an amazing artist, and Babinski brings it out wonderfully. His work has a feel of the classic comics, and is very detailed and structured. The designs feel, to me, like an expansion of what you would see in John Carter of Mars or the Pellucidar setting, it feels lived in. Add the bright, vibrant colors of Stephen Downer (Sonic Universe, Edison Rex) and you have a book that is vibrant, alive, and fun to view.

BOTTOM LINE: NOT PERFECT, BUT A RIP ROARING START

Eden #1 (of 4) is a great read. Its action packed and the strong female lead is refreshing. If you can give it time to percolate, it looks like it will be a great story that will entertain on multiple levels.

A story set in the far-flung future, focusing on a woman’s mission to find her son against a backdrop of secret agendas. The price point makes it a safe buy, and I think you will find this title has a lot to offer. Pick Eden up today.