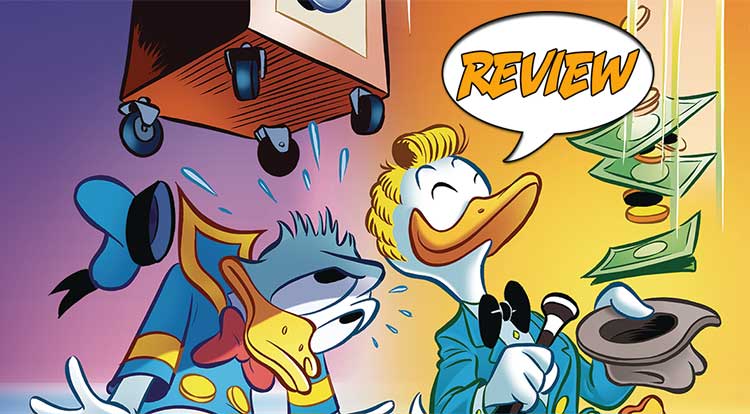 Previously in Walt Disney’s Comics and Stories Vault: Walt Disney Comics & Stories, we’ll just abbreviate that WDCS for brevities sake, came to IDW in July of 2015 when they picked up the title with issue number 721. It’s still going strong now.

CLASSIC STORIES FROM THE DISNEY VAULT

The editorial team at IDW, including Justin Eisinger and Alonzo Simon, have gone back deep into the Disney’s long history of comic books to bring us a collection of thirty-eight (38) stories featuring the Disney characters. These stories range from Sunday comic strips from the thirties, such as “Minnie Can’t See The Joke” and “Cocoon Soon”, to more recent tales such as 2015’s “Swallowed Whole”. The stories in this collection cover a range of eighty-two (82) years, the whole of Disney’s comic book publishing ventures.

But what a minute, you say, this book is touted as a 75th Anniversary, what’s up with that? Well, it has to do with publishing schedules, and Mickey Mouse Magazine from 1933 and the relaunch of it as Walt Disney’s Comics and Stories in 1940, all of which is covered in a great introduction to this collection written by IDW archival editor, David Gerstein. The point being, this is a special book, and deserves the special hardcover format.  Gerstein covers the publishing history of WDCS and a little about how IDW eventually ended up with the publishing rights to the Disney Line of Comics.

While many of the stories in this collection have already been printed by IDW in the form of the aforementioned 75th Anniversary title, they still manage to pack additional stories in it and give you a reason to buy this newer volume, it just has more to offer. So while it is thirty-eight stories, I want to take a moment to pick out a few gems and tell you a little about them.

“Ridin’ The Rails” is a story originally published in WDCS in issues #173 through #175 in 1955. Written by Carl Fallberger (Bambi, Screwy Squirrel) with art and lettering by Paul Murry (Woody Woodpecker, Buck O’Rue), it tells a tale of Goofy and Mickey as they drive their train, Penelope, through an adventure that has a train hijacking, a plot to ruin an old woman’s newly reopened mine, and lots of dynamite. In fact, this story has the most gunplay of nearly any Disney story I ever read!

“Looking For Some Action”, from WDCS issue #208, 1958, tells a story of a little known Walt Disney character, Scamp, the son of Tramp from Lady and the Tramp. Tired of hearing his Dad and company retell the same old stories over and over, Scamp and his friends go off to make a little adventure of their own. It’s a fun tale with some beautiful art from Al Hubbard (Looney Tunes, The Adventures of Peter Wheat). His art is a real treat, as it has a style that is not normally found in a print Disney story.

Those are just two of the great stories in this collection. Inside you’ll find a host of characters you know, such as Goofy, Mickey & Donald , and many you may not, Big Bad Wolf, Magica De Spell, Bucky Bug, Gremlin Gus and more.

BOTTOM LINE: NOT ONLY IS IT A GREAT READ FOR ALL AGES, ITS GOT SIGNIFICANCE!

Now, you may be asking yourself, why am going to buy a hardcover comic collection with old Disney strips? The easy answer to that is, it’s good. See, there were times in the United States when the Disney characters did not have the visibility they do now. In fact, there where periods when you pretty much could not find a Walt Disney comic on the shelves. I myself remember getting them in the late 70’s when my parents would by me the Whitman reprints that came three to a plastic bag, I still have some of them. But overseas, Disney comics have been in production almost nonstop, and several of these stories originated overseas. 2011’s “Hocus Focus” was a from a Norwegian Donald Duck & Co. comic. “Why Robot? Originally appeared in a French title named Le Journal de Mickey in 2009. There are a few more examples, but the point being that some of these have not had wide distribution in the United States, but now, thanks to IDW, they can be read by fans young and old.

Walt Disney Comics and Stories Vault, Hardcover Volume 1 from IDW Publishing, is a great collection of hard to find stories from various times in Disney’s vast history. If you love the House of Mouse or just want some good, old fashioned entertainment, it’s a no brainer to pick up a copy.

A collection of tales that will make you giggle, look around to make sure nobody heard you, and then giggle some more. Well worth the buy.