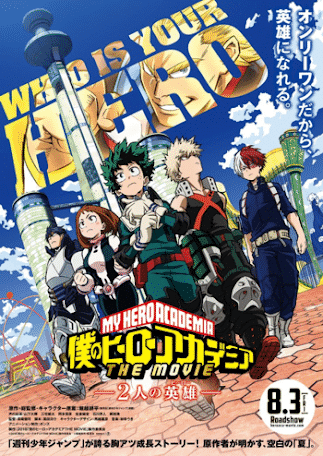 My Hero Academia: Two Heroes to arrive in North American theaters in September

Are you a fan of My Hero Academia? The Boy is, and he will devour anything and everything related to the superhero anime series, the manga, and more. I think he’s about to flip his lid over the announcement that My Hero Academia: Two Heroes is arriving in North American theaters in September. During the San Diego Comic-Con, voice actor Chris Sabat, who voices All Might, and Justin Briner, who voices Deku, announced that the movie will arrive in 400 theaters from September 25th-29th, and on October 2nd.

Over 400 theaters will show My Hero Academia: Two Heroes across the US and Canada in the limited 5-day run. The movie’s English dubbed will run on September 25, 27, 29 and the Japanese version with English subtitles on September 26 and October 2.

So, two things are going to happen. First, you are going to the comment section and let me know if you are going to attend on of these screenings, and second, I have to track down which theater closest to us is showing the movie and buying tickets so The Boy can see this for himself.