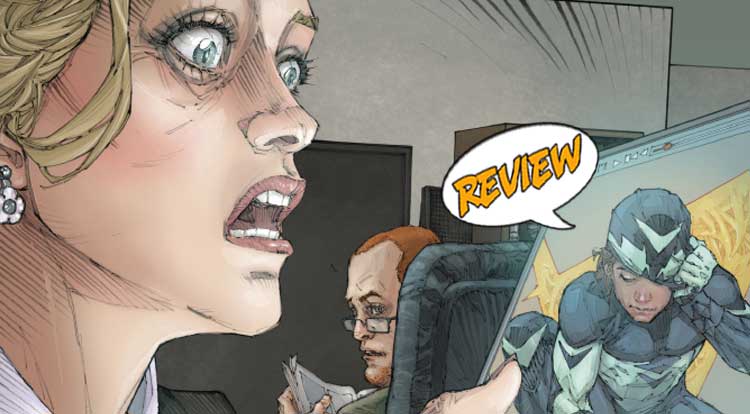 Tragedy waits in the wings for Sideways.  Will our hero make it through?  Your Major Spoilers review of Sideways #6 awaits! Previously in Sideways:  Thanks to his dimension-hopping powers, Dereck James is having a terrible, horrible, no good, very bad week.  As life-changing secrets are revealed, one missed phone call will set in motion a tragedy so personal for Sideways that no one will see it coming.

I THINK WE ALL SEE IT COMING

We open with Derek James narrating in the past tense, explaining how this seemed like just another day before a conflict with his mother, Ms. Flynn, has him running off, using his powers to escape the fight..  There’s a brief confrontation with her boyfriend and/or husband before she rushes off to work on a Saturday, and boy is the dialogue bad.  Once at work, things don’t improve, as she bumps into a number of people who want to make it clear she shouldn’t be there, almost threatening her before just walking away for no reason at all.  As for Dereck/Sideways, he goes to his friend Ernie’s house, sits around for a bit ignoring repeated phone calls from his mother (FORESHADOWING!) until Ernie’s sister explains that she’s not actually home at all.  Back at the office, Ms. Flynn discovers the truth about her son and that her employer has been surveilling him as Sideways, but when she decides it’s time not only to leave, but to give her notice, all the lights go out…  At the same time, Sideways travels through dimensions to find Tempus Fuginaut, who greets him like an old friend and welcomes his help.

As the issue ends, the Gotham City P.D. finds Dereck’s mom’s body in a back alley of Gotham City.

I’m not sure whether or not Sideways #6’s cover is meant to be an enormous spoiler or not, or just the fact that we’re dealing with a DC Comic and the death of a parent is actually apparently mandatory.  Still, that’s not the most awkward part of the writing in this issue, as every bit of dialogue feels really stilted and self-aware.  Only a discussion between Sideways and Tempus escapes overwrought purple nonsense, and even that conversation has the weird theme of an infinite, nearly immortal being whining about feeling old like a car salesman having a mid-life crisis.  Though Kenneth Rocafort isn’t on this issue, Carmine di Giandomenico delivers art that is strong and similar enough that it keeps the continuity with previous issues.  Sadly, the coloring job leans heavily on watercolor pastel shades, something which might have worked with the sharp edges of a Rocafort-drawn story, but doesn’t work at all here.  The pacing of the issue also feels a little bit off for me, with three different sequences just sort of ending in ways that feel unmotivated, giving the implication that the creators were trying to fill their page-count and had to add moments to make it all balance out.

BOTTOM LINE: JUST NOT HITTING ON ALL CYLINDERS

All in all, this is just not a satisfying issue of comics, and a moment that the creators seemed to think would be shocking feels incredibly calculated and telegraphed not only by the solicit by the cover itself.  Sideways #6 once again shows that working Marvel-style can be a dangerous proposition, leaving us with an issue that feels like it meanders through several moments that never quite gel, finishing with a big moment that ends up getting short-changed thanks to some ham-fisted foreshadowing, earning 2 out of 5 stars overall.  I’m also annoyed by a full-page shot that makes absolutely obvious the ‘Sideways is just Spider-Man’ parallel by showing the hero standing in the classic Spidey pose from the cover of Secret Wars #8, once again hammering home something that should have been much more subtle.

Predictable, not well-dialogued and kind of dull, but I found some enjoyment in the art.