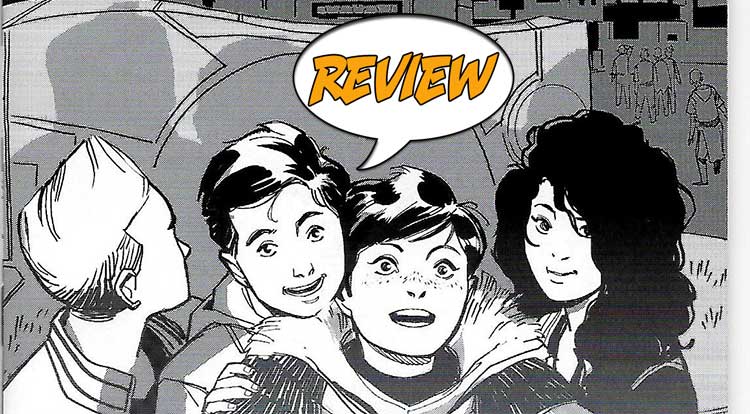 Imagine being fourteen and on the cusp of adulthood with your whole future before you…with one small twist. You live in the smallest town in the universe, on a remote, hostile frozen world. Here is the Major Spoilers review of Outpost Zero #1 from Image Comics. Outpost Zero seems like a fairly normal futuristic small town. People live their lives and work. Kids go to school and hang out. But this is all within the Dome of Outpost Zero, where several young people have to grow up and figure out what is ahead for them, and whether there will be more to their lives than survival.

Outpost Zero #1 is an exploration in more ways than one. We get introduced to the setting and the story organically, so there are small reveals all the way through. The story itself is not only about moving from childhood to adulthood, but also about how people react to difficult situations. It is a 48-page book, so there’s plenty of room to start things off.

Humans have left earth in Genships, ships apparently designed to travel out into the universe and set down on planets that could be colonized. One such ship crashed onto an icy world, which is where Outpost Zero #1 is set. The Outpost itself is a domed town and it looks kind of familiar to us – houses, buildings, streets, and farms are all here. There are trees and grass; the sky looks blue and sunny.

We get introduced to several young people who also seem familiar to us. Alea is an optimistic, smart, adventurous young lady. Her friend Steven is more cautious, even to the point of being rather anxious. Their friend Mitchell is brash and likes to pick on people, such as Sam, who has been orphaned and feels like he doesn’t belong. Lyss is more placid and resigned, and through her, we learn that at a certain age, young people go through an aptitude test which sets them on the path they will be on for the rest of their lives. It takes a lot of people in specific jobs to keep Outpost Zero running and the inhabitants alive – but at what cost?

There is a lot of drama in this book, but much of it is drama at a personal or familial level. I don’t want to reveal it all, because it is such a pleasure to get to know Outpost Zero #1, but I’ll cover some of the main plot so you get some idea of the big picture. We learn from the outset that Alea is daring. She’s calculated that, near the edge of the dome, there must be a gravity differential such that a heavy enough falling body would float. She jumps off to test this, and is mostly right, floating for a bit before gravity kicks in and she breaks her shoulder. Her parents are on the Discovery Team, meaning that they go out on the planet’s surface to explore and probe, looking for signs of life or anything else important. Alea’s dream is to join them. However, when they leave to continue their exploration, they see that a huge storm cell is on the way.

Ten years ago a storm cell came through, damaged the outpost, and claimed the lives of hundreds of people. This is why Sam was orphaned, although it doesn’t explain why Mitchell hates him so much. We also learn that Mitchell’s mother, who started out working the farms, a job she loved, grew to hate her work and kept on hating it until she died. A town meeting is called, advising every to go home and batten the hatches. We see some of the extensive preparations people go through, and as the storm outside approaches, tensions rise and the artificial sky goes dark…and not everyone is home where they are supposed to be.

Outpost Zero #1 starts out with Sam, although we don’t know him yet, watching an entry from apparently a holographic diary. This sets us squarely in the future, and while we don’t understand it entirely now, it will come back. Then we launch into the story proper, and it looks so peaceful, almost idyllic. There are a lot of complicated shots. While we see trees and farmland, we always see evidence of technology in the background, and the dome itself often appears. It is a little hard to grasp the scale – sometimes the dome seems vast; sometimes it seems much smaller. But that’s hardly a major problem. The backgrounds are drawn simply but are suggestive of more detail, so we don’t lose our sense of place.

The first views of outside are dramatic. The environs are blue-green and it is snowing, and that vast dome suddenly seems small and fragile. The contrast with the sunny interior is unsettling. It also gradually dawned on me how empty things look, like the dome was meant to hold many more people. As the storm draws near, the artificial daylight shuts off, and again you feel the vulnerability, fear, and determination (and sometimes resignation) of the people living here. The characters are distinct, and we can see their emotions not only in their faces, but in their body language.

BOTTOM LINE: A DEEP BOOK WITH A LOT TO EXPLORE

Small town life is full of undercurrents. Now imagine a small town where there is ever-present danger, so everyone is dealing with that stress. Now imagine that you can never get out of that small town and maybe, if you think too hard about it, you may not even survive anyway. Already, Outpost Zero #1 touches themes of hope, darkness, and desperation.

Who knows what lurks in the minds of survivors, or out on the planet itself?