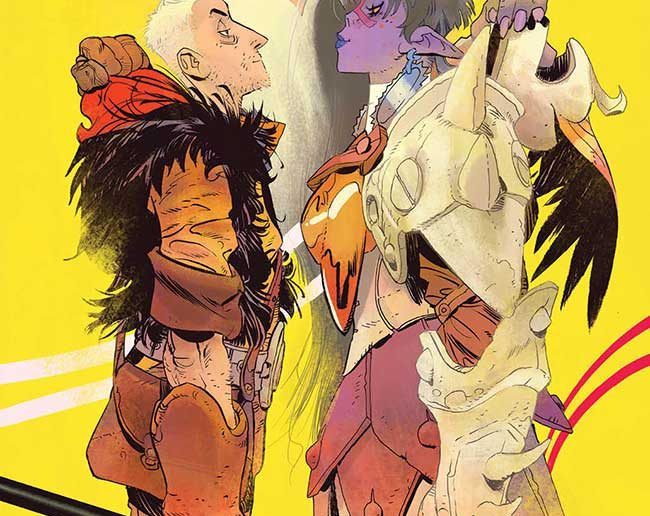 BOOM! Studios released a first look at Coda #4, which is scheduled to arrive on August 15th.

This all-new series, which sold out at a distributor level before the release of the first issue, reveals the aftermath of an apocalypse which wiped out nearly all magic from a once-wondrous fantasy world, in which an antisocial former bard named Hum seeks a way to save the soul of his wife with nothing but a foul-tempered mutant unicorn and his wits to protect him…but is unwillingly drawn into a brutal power struggle which will decide forever who rules the weird wasteland.

In CODA #4, featuring a main cover by Bergara, along with variant covers by the award-winning team of Michael & Laura Allred (Silver Surfer) and artist Jay Shaw (Big Trouble in Little China), Hum has successfully warded off Thundervale from its assault on Ridgetown for at least one more day, and now turns his attention to the Urken soldier who turned the tides of the battle…

“The reveal at the end of Issue #3 is a status quo shaker, and you won’t want to miss what happens next for Hum,” said Eric Harburn, Senior Editor, BOOM! Studios. “CODA #4 may be the end of our first arc, but it’s just the beginning of the epic Si and Matías are crafting.”