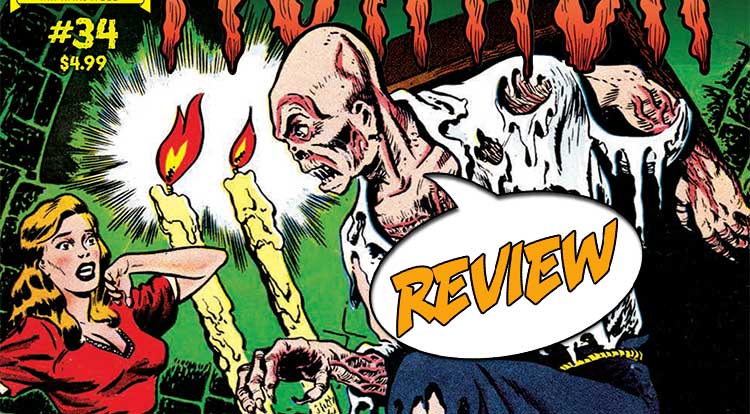 Horror comics today are often a dour slog through blood and guts, with frequently unsympathetic ‘heroes’ occupying too much of your time.  Thankfully, the editors at Haunted Horror have returned with yet another fun issue that will have you laughing and crying, often at the same time, at the reprinted 50s stories contained inside. Previously in Haunted Horror: More camp, more cheese, more cheap thrills and even more hysteria as we return to the delights of 1950s horror comics.  Puzzle over the decade’s old references, shriek in horror at the husband and wife dynamics, and ponder the cultural appropriation!

The delights of pre-code horror comics are presented once again in Haunted Horror #34, carefully curated, collated and collected by the editors Steve Banes, Clizia Gussoni, and Craig Yoe.  Within its 52 pages are eight delightfully bonkers horror tales.

It’s hard to believe, even back in the 1950s, that anyone but the most naïve or prone to freaking out at things that go bump in the night, would be scared by any of these tales.  That’s beside the point, though.  These stories are fascinating curios of a different era of horror fiction, a time when men could be men (and pay the price) and women could be put upon, patronized drudges (and still, regrettably) pay the price.

Haunted Horror #34 begins with Dinner for One, where Bruce and his new wife Lois go camping.  Lois is decidedly reluctant, while Bruce is extremely forthcoming in telling his wife that ‘You’ll learn to like the things I do!’ which involves following him around while he shoots deer.  The duo, and their guide, comes across a seemingly very friendly mountain hermit, who definitely likes to hunt his own meat.  Human meat, as it turns out!

This is probably the most entertaining of the stories (if you can get past the antediluvian depiction of a husband’s attitude to his wife), evoking the feel of EC Comics in its last, ghastly panel.  Lots of fun.

One pager ‘A Tall Warm Drink’ rushes past inconsequentially, to be followed by ‘The Horror Heads’ which begins in Tibet, and ends in Crazy Town.  A Tibetan curse is swiftly laid on German (!) guide Dirk van Gort, who in a fit of rage shoots his employer and their Tibetan Sherpa.  As van Gort flees towards the border, strange pustules form on his skin, developing into human heads that torment him.  Employing his Bowie knife, van Gort rids himself of the first, but soon more develop.  The ending, I suppose, is telegraphed a mile away, but this is an unintentionally hilarious take on the curse trope, with a hero willing to slice and dice himself to escape the curse.

Haunted Horror #34 continues with It Came from the Bottom of the World, which is passable fun.  Stuck on an ocean cruise, stick in the mud Ted refuses to partake in the crossing the equator ritual of jumping fully clothed into a swimming pool.  Ted is in love with the word ‘bunk’, which he frequently uses to describe the superstitious nonsense.  Little does Ted know that Neptune, King of the Sea, lurks nearby…  A strange story, with a memorable ending.

The Slasher is frankly insane.  Nebbish protagonist Ted Templer daydreams he is the heroic characters in the tabloid newspapers he devours.  While daydreaming he is a famous socialite, or daring reporter, Ted neglects his job, to the amusement of his colleagues.  Embarrassed, he delights in the antics of the Slasher, whose death count rapidly approaches double figures.  Totally without a clue, Ted wants to be the one to catch the Slasher, and have his name in all the papers.  Ted finds himself in a position where he cannot escape the blade of the Slasher.  Totally lacking in internal logic, with the main character that frankly deserves his comeuppance, The Slasher is one of those stories you need to read to believe.

Things don’t calm down when we turn to the next story, The Cannibal.  The skeletal bodies of victims appear across London, the victims of a maniac cannibal who announces their presence with a maniacal laugh.  Pretty gruesome, even for 1953, the death toll heads northwards in rapid succession.  The most interesting aspect of the story is the depiction of Libby, a waitress who just wants to have a good time, despite the cannibal’s bloody rampages.  Despite the best efforts of the patronizing men around her, Libby is a go-getting gal who just wants to dance into the wee hours of the morning, cannibal be damned!  Again, with an ending that you could see before you were born, it is nonetheless an interesting, and amusing, story.

You are the Murderer involves a love triangle, hypnosis, and a faked death and burial of the heroine.  Probably the most interesting aspect from a modern view is that our blonde heroine is married to an Eastern mystic, and the frankly racist attitude of the cad who wants to steal her away from her husband.  Predictable, it is enlivened by the hysteria of the last page.

Haunted Horror #34 wraps up with a frankly bizarre story, The Coffin.  Our viewpoint character is in fact, a coffin, longing for the day when someone will be interred with it in the ground.  But woe, the coffin is far too expensive for the small town it resides in, and his owner, in concert with the local doctor, is far too busy killing off the poor populace to be able to sell it to anyone.  But vengeance is at hand(le) when the doctor and undertaker each get their comeuppance in an ending too ludicrous to describe.

I would recommend not reading all this in one sitting; otherwise, you’ll be punch drunk with the craziness within these pages.  That said, Haunted Horror #34 is a fantastic window back into the 1950s, with its appalling race and marital relations on full display, but also the invention and storytelling chops of the writers tasked with condensing plot lines into as few pages as possible.  The art isn’t of the standard we expect today, frequently looking like it was the artist’s first passes, but more often than not, the art conveys the horror in a way the often hysterical writing doesn’t.

I had a lot of fun with Haunted Horror #34 and I’m pretty sure you will also.