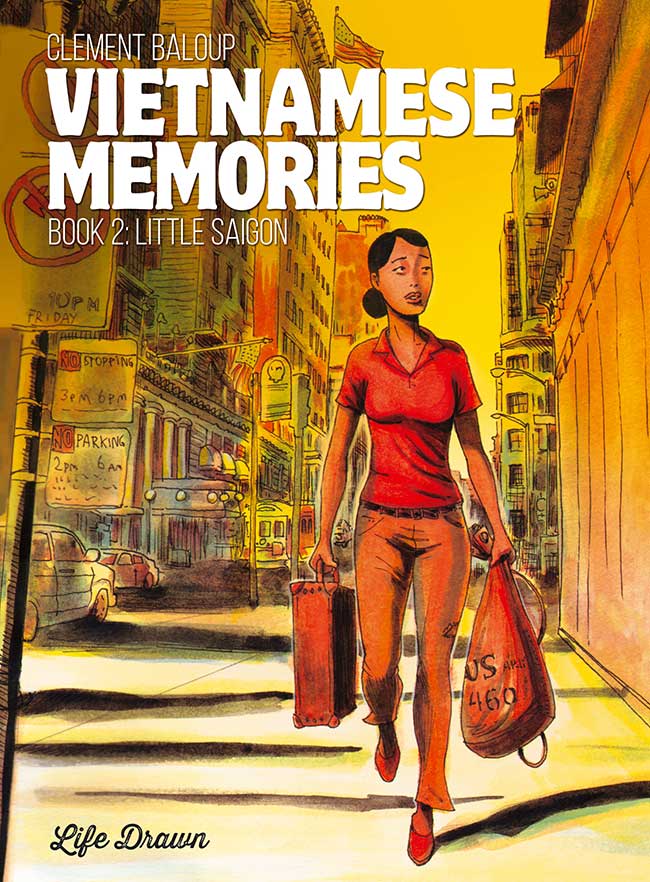 In advance of San Diego Comic Comic International 2018, Humanoids is announcing a second wave of graphic novels for Life Drawn, its new literary imprint. Internationally renowned for publishing seminal genre works including The Incal by Alejandro Jodorowsky and Mœbius and The Metabarons by Jodorowsky and Gimenez, Humanoids is expanding its storytelling focus with Life Drawn, which spotlights personal stories and provocative, political narratives. The upcoming titles run the gamut, including: a biography of feminist icon and actress Hedy Lamarr, focusing on her revolutionizing scientific and technological innovations; a runner’s memoir of the New York Marathon; a hallucinatory and horror-fueled telling of Marilyn Monroe’s life and a humorous exploration of religious identity (and Krypton). The famous Hollywood Hills. A strange, twisted forest filled with freaks and broken-down trailers. In this dark world, movie stars are born in the shadows. Determined to become the greatest one of all, shy Norma Jean Baker (Marilyn Monroe) comes to this ghost-town with hopes and dreams. Unfortunately, she’ll have to face all kinds of monsters to reach her ultimate goal. . . . This is Marilyn Monroe’s dark journey like you’ve never seen it before. Kabul Disco Book 2: How I Managed Not To Get Addicted to Opium in Afghanistan by Nicolas Wild

In this second volume of his travelogue series, Nicolas Wild returns to Afghanistan, unfulfilled by his old life in Paris, to resume work at the Zendagui agency. This time around, however, his job is even trickier than illustrating the Constitution (see Book 1): he has to convince Afghans that “Opium is Bad” in a time when no one wants to hear what expatriates have to say. With a charming sense of humor and a genuine love for Afghanistan, Nicolas Wild depicts a series of complicated events, transpiring in a complicated country. Superman Isn’t Jewish (But I Am . . . Kinda) by Jimmy Bemon (writer) and Emilie Boudet (artist)

Adapted into an eponymous short film by Jimmy Bemon.

An intimate and humorous autobiography of a boy’s quest for identity as he struggles with his heritage and his heroes. Benjamin would always proudly say, “I’m Jewish. Like Superman!” Assuming that Judaism is some kind of super power and Hebrew is akin to the Kryptonian language, Benjamin believes each of his family members is a superhero. Until, like Krypton, his world is shattered. After learning of the link between being circumcised and his religion, Ben decides to hide his heritage from everyone. Caught between the desire to avoid disappointing his Jewish father and his desire to understand his Catholic mother, Ben has to find a way to abandon his secret identity for a very public one. Humorous, timeless and universal, this personal and poignant story of acceptance and understanding shows how we all must learn to love the hero within ourselves. “I’ve looked through hundreds of books and have never experienced anything like this. . . . [My New York Marathon] has a place in running literature.” ― From the foreword by Jeff Galloway, US Olympian and Runner’s World columnist

Published timed to the annual New York Marathon, this inspiring love-letter to the event and to the city that hosts it has already been championed by running heavyweights Jeff Galloway and Amby Burfoot, and endorsed by both the New York Road Runners club and the New York Marathon itself.

A quiet, aging teacher decides to run the New York Marathon. Along the way, he transforms into the man he always wanted to be. Sebastian, a quiet and shy teacher, decides, on a whim, to challenge his aging body and crumbling spirit and run the New York Marathon. From the streets of France to the streets of Brooklyn, Sebastian pushes himself past limits he didn’t even know he had. A humorous and poignant autobiographical tale and a love letter to the landscapes and panoramas of New York as well as a testament to the triumph of the human spirit. To her fans, Hedy Lamarr was a silver screen star; to those who knew her, she was a genius. She fashioned designs to revolutionize the planes built by Howard Hughes. In the dead of night, she tinkered with her blueprints and experiments. And when World War II began, Hedy left her superstar persona behind and claimed the patent for a strange device. One that manipulated sound, created an unbreakable code and confounded the Nazi regime, giving the allies the advantage they needed to claim victory. Scientists called it “Spread Spectrum” technology. The military called it a “secret communication system.” Today, we call it a “cell phone,” “Wi-Fi” and a little thing called “Internet.” This is the story of a genius. A visionary. And the most beautiful woman in the world. The second in a three book series exploring the stories of displaced Viet Kieu around the world, Vietnamese Memories: Little Saigon immerses us in the diaspora of the United States and the assimilation of these Vietnamese immigrant communities, labeled Little Saigons. Through trips made in 2009 and 2010, Baloup shows how the memory and culture were maintained in these Asian neighborhoods in the heart of the big American cities (Chinatown, Little Tokyo, Lao Area, etc.).