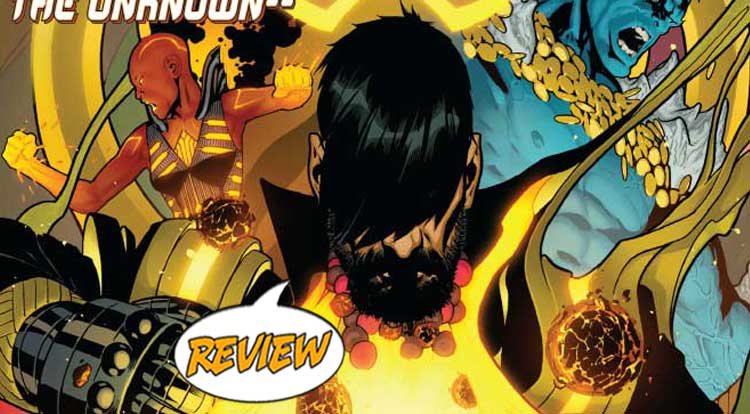 Who is Neon The Unknown?  And where does he get his strange reality-warping powers of creation?  Your Major Spoilers review of The Unexpected #2 awaits! Previously in The Unexpected: The ruthless Thanagarian dictator Onimarr Synn has arrived on Earth with his army to pick the planet apart in search of the legendary Nth Metal.  Neon The Unknown and Firebrand will have to collect themselves after the cataclysmic events of their first issue, discover their true connection to the Dark Multiverse and travel across the DC Universe to stop Synn’s rampage…  But will they survive the trip?  And what does former Challenger of the Unknown June Robbins have to do with it all?

Last issue, we were introduced to Neon and The Unexpected as they encountered their new would-be member, Firebrand.  But, in a nice swerve, half the team was wiped out by the villain, leaving Neon and Firebrand alone and shocking me a little bit.  This issue picks up in the ashes of the burning building where we left off, as Firebrand tries to figure out the connection between his strange powers and the Nth Metal.  We even get a thumbnail version of his origins (a former artist, Neon has been given the power to create, but never destroy, thanks to an encounter with the World Forge) and see his grief at losing his teammate, who may have been more than a friend.  Neon and Firebrand make their way to a “safe house”, teleporting back and forth across the DCU to lose any pursuers before landing on Blackhawk Island, where they meet roboticist June Robbins, who has bad tidings for them all.  As the story closes, somewhere a monster awakens, with bad things clearly waiting in the wings.

VISUALLY IMPRESSIVE, BUT THE STORY IS GETTING LOST

I like the look of this issue, and I can totally feel Orlando’s influence in the origin story of Neon, but after a wobbly first issue story, things are starting to come right off the rails here.  Character names, places, and events are thrown out, overwhelming me as a reader with a ton of implied backstory without giving it a chance to mean anything.  Neon’s design is excellent, and Firebrand looks pretty cool, albeit nearly nothing like she did last issue.  The impromptu tour of the world is well-drawn, as is the evil Onimar Synn in his spaceship of evil, but it just feels like there isn’t enough story to keep things in check.  Once again, it feels like the ‘Marvel Style’ creative process is working against the book and causing flaws that the creators might have been able to offset if they were working full-script.

BOTTOM LINE: NOT SURE WHERE THIS IS GOING

All in all, there’s a lot to like in this issue: Neon’s backstory is well-crafted, and he is confirmed on-panel as bisexual, which is long-overdue representation in the DCU.  The use of elements like Slaughter Swamp, June, Blackhawk Island and more make it clear we’re operating in a larger universe, but overall The Unexpected #2 isn’t fully successful in story or in art, earning 2.5 out of 5 stars overall.  It feels like there is a lot of potential in these pages, but this issue just doesn’t quite bring it all together to make it all stick together and bring me back next month for more…

Very difficult to follow, with art that inconsistently ranges from lovely to blah... I'm not entirely sure I want more of this book.