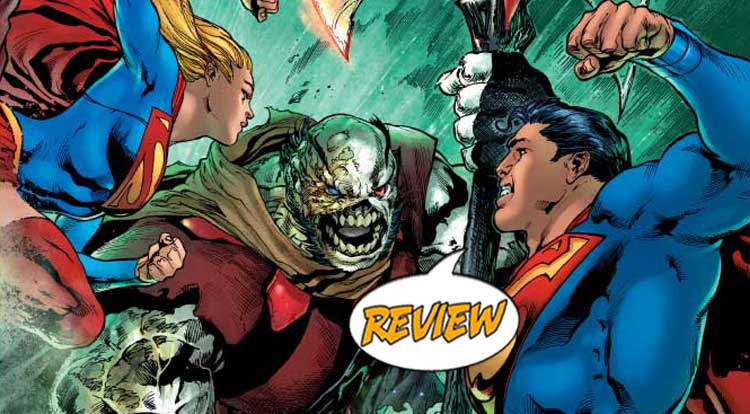 The fate of Jon Kent hangs in the balance.  Will Superman have to give up his family to save the world?  Your Major Spoilers review of The Man Of Steel #6 awaits! Previously in Man Of Steel: The Man of Steel is facing his greatest threat to date, a villain called Rogol Zaar, who claims to have destroyed Krypton himself.  Zaal has murdered the Bottle City of Kandor and proven himself to be a physical match for Superman in nearly every way.  But even more terrifying, Superman’s father, Jor-El, has arrived with an ultimatum: Jon Kent must go with him, to avoid growing up into a monstrous, murdering, superhuman whirlwind.  Can Superman save his family without sacrificing the things he loves?

ROGOL ZAAR IS SUCH A DULL GENERIC MONSTER VILLAIN

This issue is fought on two fronts: One, an argument in the Kent family home, as Jor-El rather rudely informs his long-lost son that his parenting style is ineffective, while Jon worries about what he might grow up to become.  The other takes place at the center of the Earth, as Rogol Zaar prepares a bomb that will destroy the Earth, taking with it the last vestiges of Kryptonian heritage.  (The time frames of these two events aren’t made entirely clear in this issue, but I believe that the domestic strife takes place well before the battle with Zaar.)  Superman realizes that he can’t win either battle, but before he can act, Lois makes the unilateral decision that not only will Jon go to space with Jor-El, she will accompany them and write a book about it.  Likewise, before he can formulate a plan to deal with Zaar’s explodey-ness, Supergirl arrives to project the villain into the Phantom Zone.  Superman attempts to protest, but she reminds him that, by Kryptonian law, Zaal is guilty, having murdered Kandor.  “On behalf of all Kryptonians,” she snarls, “$&@# him.”  As the issue ends, Superman is once again alone, as Supergirl sets out to find the truth about Kryptons demise and his family leaves with Jor-El.  Meanwhile, back in Metropolis, a young man reports that he knows the truth about the recent string of arsons: Superman did it.

When we reviewed Action Comics #1000 not so long ago on the Major Spoilers Podcast, my big complaint was the truly uninspired look and cliched motivation of Zaal, and this issue really emphasizes everything I hate about the character.  He is really just a more gross-looking Doomsday, whose point is to stretch Superman to his breaking point, but even some snappy Bendis back-and-forth dialogue fails to make him interesting or truly threatening…  Worse still, he’s dispatched (albeit almost certainly temporarily) not by Superman having a good idea or even by Superman turning into a mindless slugging machine, as happened with Doomsday, but by having another character suddenly arrive with the deus ex machina solution.  Is that intentional?  I have to think so, as Lois likewise circumvents our hero having to make the hard call about Jon in her part of the story, telling Clark that Jor-El cannot be reasoned with, and so she has to go to protect their son.  Man of Steel #6 makes Superman seem very passive and compliant, which are not things I associate with the first(ish) superhero, and I hope that the creators are going somewhere with it.  Jason Fabok’s art is really impressive throughout the issue, though, making the boring Rogol design a bit less bland and giving us some really impressive Phantom Zone imagery.  His use of facial expressions during the extended Kent family showdown are likewise well-done, making Jor-El much more imposing than previous appearances, where he was little more than a grimacing mannequin in a headband.

BOTTOM LINE: HOW TO JUDGE WHAT YOU DON’T LIKE

I admit it: I hate the idea of shipping off Lois and Jon so that a new creative team can have the Superman story they want, as it undermines the expectation that anything in comics will endure.  By rolling back the clock here, I think that the creators are doing Superman as much of a disservice as the New 52’s brash, loose-cannon version of the hero did.  That said, the quality of the issue and my firm dislike of what it’s doing are two different matters.  The Man Of Steel #6 is troublesome storywise, sidelining its main character for not one but TWO major plot moments, but the art is quite good, the dialogue has some lovely moments and it builds on the existing characterization of Jon Kent, Lois Lane, and Kara Zor-El in interesting ways, earning 3 out of 5 stars overall.  If only Superman had something to do in this issue, it might have gotten me past my problems with the blatancy of its retconning and fully engaged in what our hero will do with his new status quo.

An issue that feels like housekeeping, putting Superman in the back seat as others make all the hard decisions for him, and mostly setting up the writer's preferred new status quo...