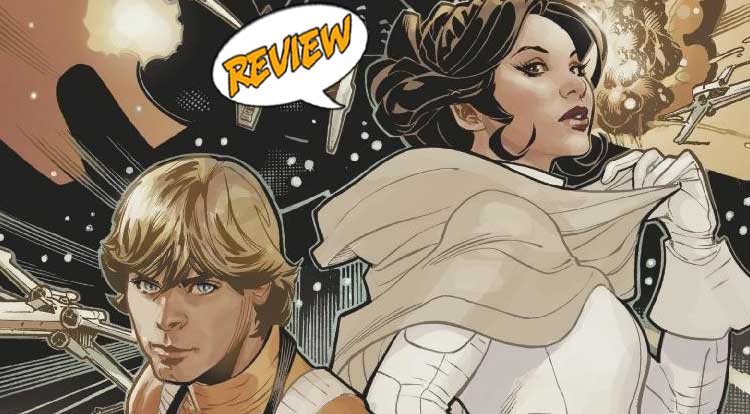 Admiral Ackbar and his people have officially become a part of the Rebel Alliance, but will the duplicity of Queen Trios shatter their newly-forged unity?  Your Major Spoilers review of Star Wars #50 awaits! Previously in Star Wars: The murder of their king at the hands of the Empire has inspired open revolt on Mon Cala, the homeworld of Admiral “It’s a TRAP!” Ackbar.  Thanks to his quick actions, along with Luke, Leia and Han, the powerful Mon Calamari fleet stands ready to fight with the Rebel Alliance.  It’s a much-needed boost in manpower and ships, leaving the Rebels more ready than ever to free the galaxy from the Emperor and Darth Vader, but their alliance with Queen Trios of Shu-Torun is much more dangerous.

MOMENTS OF TRIUMPH ARE DANGEROUS IN ‘STAR WARS’

It may be the finest moment in the history of the Rebel Alliance.  The Death Star has been destroyed and they gained new allies who have provided them with ships and resources, enough to attack the Empire in earnest.  Leia has arranged an assembly of all the Rebel forces to show their newly won resources, and even Queen Trios is impressed.  As she hobnobs with the biggest of alien wigs, Han Solo, Chewbacca and See-Threepio are off on a mission to buy some Imperial transponder codes, while Luke Skywalker and what I believe is Red Squadron pull off a dazzling display of flying for the assembled Imperials.  As General Dodonna gives the signal for the Rebels to disperse back into hyperspace, it seems everything’s looking up roses (or the equivalent space-version thereof)…

…until the hyperdrives refuse to comply.  And the comms go down.  As Imperial Star Destroyers appear out of nowhere, the Rebels find that even the bay doors won’t open, leaving their shiny new collection of fighter ships out of action.  That’s when Leia realizes that Queen Trios has disappeared.  In a second tale, we see the backstory of how and when Trios was ensnared by Vader and the Empire, a story which provides a vivid lesson in just why Vader is feared across the galaxy.  Suffice to say that his “gift” of a piece of shattered Alderaan to remind her of what happens to people who disobey is the least terrifying moment of the story.

First off, kudos to Larocca and Guru e-FX for this issue visuals, as it’s a great-looking story.  As Luke and his fellow pilots swoop in and do a little ‘Blue Angels’ style stunt-flying, their ships give off glowing trails of color that make for a gorgeous couple of pages.  The interiors of Star Wars #50 are no less impressive, as everything looks new enough to support the story’s premise that the Mon Calamari and and Shu-Torun have refitted the Rebels with new gear, it still has the worn-down, dirty look that means ‘Star Wars.’  Best of all, Larocca manages to give just as much gravity, realism and facial expression to Trios as he does to Leia, Han and company, which is always difficult when part of your cast is based on real actors.  Camuncoli’s art on the flashback tale is slightly less photo-realistic, but still conveys energy and the power of Vader in every panel.  This issue’s story features a triumphant Vader intoning that, now, “Hope dies”, and it sells that premise perfectly in both main and second feature.  The slow-burn reveal that Trios has not only lured the Rebels into a trap, but sabotaged their ships, called in the Empire and made an escape with a snarky comment is excellent, leading to a last-page moment that is shocking and terrible, even knowing as we do that this story has to continue.  (After all, we’re still in between the first two movies, chronologically speaking.)

BOTTOM LINE: A REALLY EFFECTIVE GUT-PUNCH OF A STORY

In short, this is a book that looks great, makes for a solid single-issue story and upholds the old-school Marvel tradition that issues in multiple of 25 have to be anniversary extravaganzas, keeping all the plates spinning as it goes.  Star Wars  #50 is a really good comic that overcomes the problem of telling stories in between stories already told, the difficulties of licensed art of real-world actors and even gives us cool Han Solo doing cool smuggler stuff, earning 4.5 out of 5 stars overall.  I’m not sure how far before the events of ‘The Empire Strikes Back’ we are, but it’s clear that even the most powerful Rebel fleet still faces an uphill battle.

Good-looking, suspenseful, skillfully plotted and true to the Star Wars aesthetic. What's not to like?