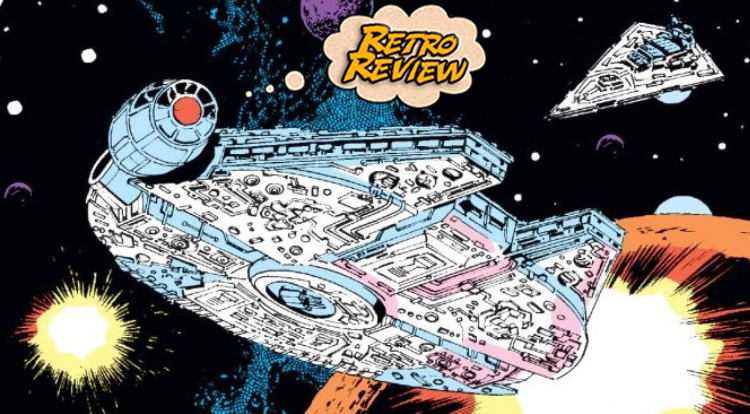 In honor of Star Wars hitting fifty issues, it seemed like a perfect time to discuss the FIRST time that happened, nearly forty years ago!  Your Major Spoilers (Retro) Review of Star Wars #50 awaits! Previously in Star Wars: Farmboy Luke Skywalker accidentally gained possession of a pair of droids containing the plans for the Death Star, the Galactic Empire’s new super-weapon, and was drawn into the Rebel Alliance.  With the help of a roguish smuggler, he delivered the plans to Princess Leia, a youthful high muckety-muck in the Rebel hierarchy and became a key member of their assault on the Death Star, firing the killing shot that destroyed the base.  Unfortunately, their subsequent battles didn’t go quite as well, with the loss of their Hoth base being especially narrow.  Realizing that his destiny lay in the mastery of The Force, Luke set off to be trained by Yoda, legendary Jedi Master, while love blossomed between Leia and Han the smuggler.  After another ambush on Bespin, Luke lost a hand in combat with Vader, Han was frozen in carbonite and taken by bounty hunters and Leia found herself blessed with the velvet beauty of Lando Calrissian, an old associate of her lost boyfriend.  This issue opens in deep space, as Lando and Chewbacca get ambushed by a squadron of TIE fighters, only to be the recipients of a last-minute save by Leia (in the ship that she first appeared in, way back in the opening moments of Star Wars in 1977, no less.)  And she has bad news… Lando is a little bit shocked at having to wear a breathing suit on a perfectly habitable world, but Leia explains that anyone who is exposed to The Crimson Forever is infected with the same plague that has laid low the young Jedi.  In a pretty brilliant bit of storytelling by Goodwin and Williamson, we flash back to see Luke in action, infiltrating an abandoned Star Destroyer, where each and every crew member is dead, their skin turned a horrible red color.  (Given that some of them were green or purple already, that’s a pretty impressive order.)  Before Luke can order everyone into haz-mat gear, one of his fellow Rebels finds the source of the contagion…

As everyone around him starts to die, Luke’s Force-sensitivity helps to hold back the strange infection, but his mind is still very active.  As with many such Force-related visions of the era (see the swamp sequence in ‘Empire’), it’s unclear whether he’s hallucinating or acting on some sort of astral plane, but regardless, it gives Star Wars #50 a lively action sequence, including an impressively-rendered lightsaber battle from Williamson. I’ve always been bugged by the fact that Luke’s pants are flesh-colored throughout this sequence, as it gives the illusion of nudity, making it look like he’s fighting his wicked father wearing boots and a belt, with his little Skywalker out.  Still, it’s a nice use of story space by Archie Goodwin, making sure that this anniversary issue gets in a little action as we wait nervously over Luke’s sickbed.  Likewise well-handled is the way Star Wars #50 works Han (who is still frozen in Carbonite in Boba Fett’s clutches, remember) into the story, as Chewbacca recalls a previous run-in with these strange jewels alongside Captain Solo.  Some years ago, he and Han fell into the hands of slavers, who tried to sell their services to Krysk, a strange man who wanted to recover a PAIR of mystical red gems.  Fighting their way into the stronghold where the rubies were kept, Chewie was tasked with taking down the guardian… Encountering a priest, Solo found out that the jewels’ power was the only thing protecting his world, and that separating them would lead to grave danger for those exposed to their power.  Fortunately, Han double-crossed Klysk and his pirate band, and witnessed first-hand how the separated jewels led to the strange radiation poisoning that brought down Luke Skywalker.  Better still, how reuniting the pair undid the “contagion”, sending Lando, Leia and Han out to find the missing second gem.  A battle with bounty hunter IG-88 ensues, an old enemy betrays them (she’s the comic-only baddie Domina Tagge, in case you’re worried) but before they can get the gem back, Luke dies of The Crimson Forever.  Then again, maybe not, as Domina has a greater understanding of the jewels and a proposition for Leia… The gems are somehow alive, dear friends, and are eternal mates.  When they are separated, they somehow emit waves of anguish that cause the plague.  The fatalities don’t come from The Crimson Forever itself, but from exhaustion due to fighting it.  Luke’s “death” was actually a form of suspended animation, as he stopped resisting the gems’ effects, allowing him to recover immediately after the effect ends.  Star Wars #50 is an intricate Goodwin plot, using a couple of ingenious tricks to give us moments with all the primary Star Wars cast, providing a compelling narrative that overcomes some wonky coloring, earning 3 out of 5 stars overall.  It’s good to see a done-in-one tale put together with this many twists and turns.  It really makes for great use of the double-sized format.

Goodwin/Williamson Star Wars is always worth the price of admission, and this issue is a cleverly executed done-in-one anniversary celebration.