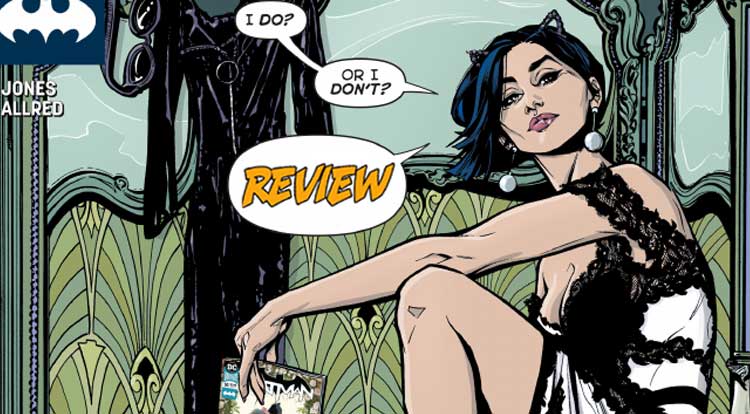 The wedding has come and gone, and the big question remains: Is Selina Kyle officially Mrs. Batman or not?  Your Major Spoilers review of Catwoman #1 awaits! Previously in Catwoman: The wedding night’s barely over, but Catwoman’s back on the streets, this time to expose a copycat who’s pulling heists around Gotham City.  As Selina cracks the whip on her former criminal cohorts, she’s attracting unwanted attention from one of Gotham’s most dangerous groups.  The mob?  Nope.  Try the GCPD.  And as if the Bat-Bride didn’t have enough problems, don’t miss the debut of an all-new villain determined to make trouble for all nine of Selina’s lives…

ACTUALLY THE REAL STORY IS SOMETHING ELSE ENTIRELY

By this point it’s probably common knowledge that the wedding didn’t actually go through (and if you didn’t know that, I’m sorry; go check out Stephen’s review of Batman #50 on the most recent Major Spoilers Podcast) and this story picks up in a pretty shocking place.  On the run from the police, Catwoman whips out a gun and starts shooting at her pursuers.  What could have happened to Selina Kyle???

Actually, nothing.  Selina is busy playing Mah Jongg in a casino while someone wearing her mask creates havoc, all intercut with a very disturbing interview with the governor and his new wife.  The rules of foreshadowing are in full effect here, as said wife ends up being behind the pseudo-Catwoman, while the real Catwoman gets intercepted by the police.  Her escape is amazing, acrobatically speaking, and she returns to her current homebase: A storage unit.  The arrival of her Catwoman accoutrements and costume in a package from Wayne Manor causes her to break down crying before setting out into the night, setting up a confrontation with her doppelganger and a really shocking final page…

THIS ART IS *AMAZING*

First off, this book is GORGEOUS.  Jones’ art uses heavy blacks and shadows to define the art (which is great, given Catwoman’s jet black hair and leather costume), and gives everything a stark outline that nearly pops off the page.  The coloring is likewise excellent, and the reveal of Mrs. Governor Creel’s real face was utterly disturbing, both visually and narratively.  The story gives just enough to set up the events that will bring Catwoman out of her self-imposed exile without short-changing her emotional state after the events of Batman #50.  I also appreciate the ways the visuals differentiate Catwoman from her copycat (not my pun, by the way, it’s in the book, so don’t groan at me), although I’m not quite 100% sold on the new Catwoman costume with the cutout wrist and underarms.  It is, however, a step up from the Jim Lee “big goggles” version that always made her look remarkably like the gremlin from the Bugs Bunny cartoons, and her cowl is once again connected to her costume, which is in itself worth a star.

In short, I’m excited for Selina’s Kyle’s adventures under these creators and I really want to see the character define herself as something other than Bruce Wayne’s main squeeze once more.  Catwoman #1 is a fresh start for our hero, featuring amazing art, incredibly coloring and an intriguing story hook that never forgets about the woman inside the leather suit (and for once focuses on more than her big breasts) earning 4.5 out of 5 stars overall.  If nothing else, the lack of a boob window and/or deep cleavage on Ms. Kyle’s catsuit is a step in a better direction…