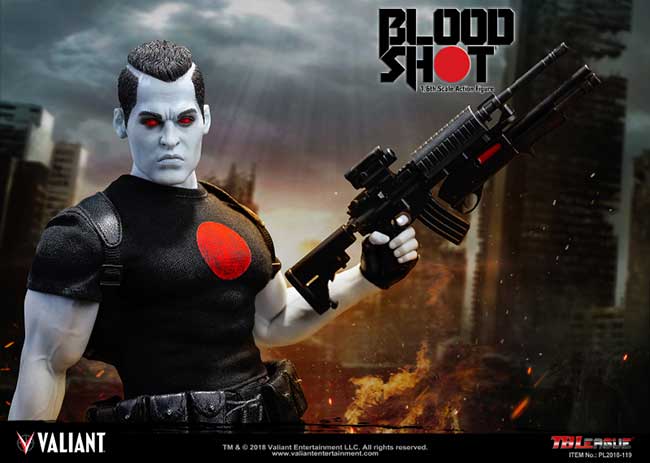 While Sideshow Collectibles and Hot Toys are big names when it comes to sixth-scale action figures, Valiant Entertainment is entering the market with Phicen for the release of the Bloodshot 1/6th Scale Action Figure.

Brought back from the dead and infused with cutting-edge nanotechnology, Bloodshot is a nearly unstoppable killing machine. His enhanced strength, speed, endurance, and healing made him the perfect weapon. After defying his programming and escaping his masters at Project Rising Spirit, Bloodshot now fights to rediscover the secret of his true identity…but remains haunted by the past that nearly destroyed him.

“We are extremely excited to partner with Phicen on a line of high-end collector Valiant action figures, starting with Bloodshot,” said Russell Brown, Valiant President of Consumer Products, Promotions and Ad Sales. “Their superbly detailed, 1/6 scale action figures are some of the most sought-after in the world, so we are thrilled to be able to offer these to our fans.”

Valiant let us know that the figure will also come with the following accessories:

The Bloodshot 1/6th Scale Action Figure is scheduled to arrive in September, with a retail price of $159.00.  Pre-orders are currently being taken on the Phicen’s website.