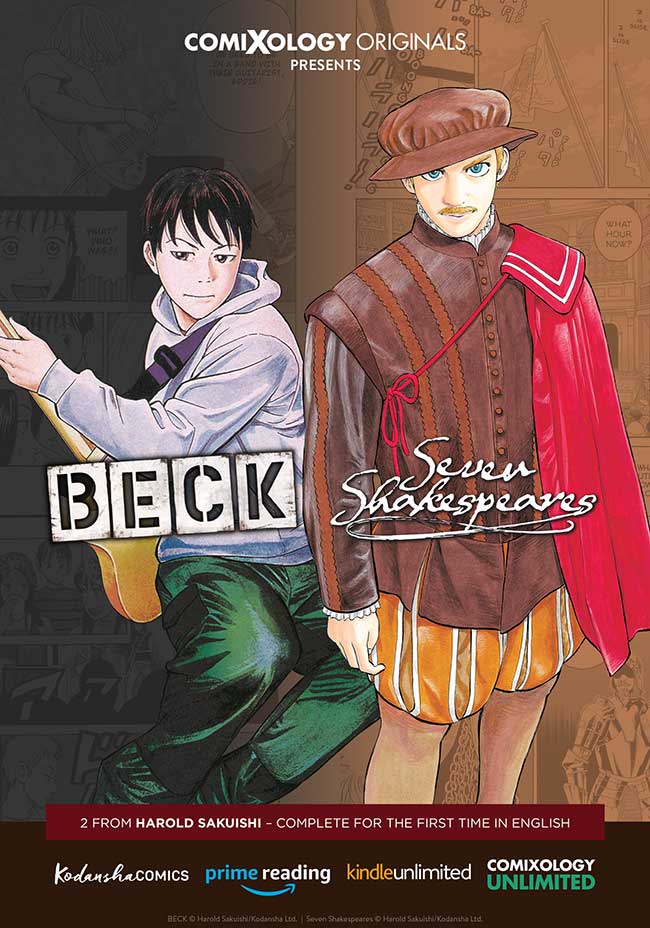 ComiXology and Kodansha Comics, announced the debut of two new manga series BECK and Seven Shakespeares from master mangaka Harold Sakuishi as part of the growing line of comiXology Originals titles. Sakuishi’s best-selling manga series BECK returns to readers with new, never-before-translated volumes and debuts today with the first 14 volumes available to read now. This release of BECKwill see the series completed for the first time in English. In addition, Sakuishi’s new ongoing series Seven Shakespeares launches for the first time ever in English with 4 volumes available today. BECK
BECK is the story of fourteen-year-old Yukio Tanaka. He has no hobbies, bad taste in music, and his shy and neurotic personality make him his own worst enemy. Little does he know that his life will be forever changed when he meets rocker Ryusuke Minami, an unpredictable sixteen-year-old with a cool dog named Beck. Ryusuke inspires Yukio to get into music, and the two begin a journey through the world of rock ‘n’ roll dreams! Harold Sakuishi’s highly addictive manga series, that spawned the hit anime BECK: Mongolian Chop Squad, will be completed for the first time in English with comiXology Originals bringing the additional volumes 15-34 in the next year.