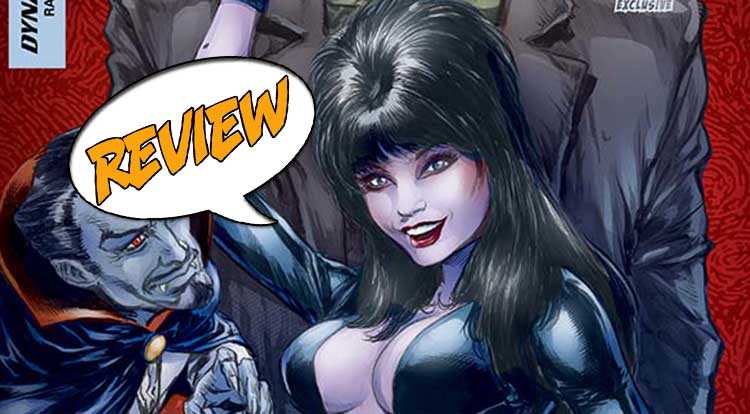 Elvira: Mistress of the Dark #1 Review

Elvira has come unstuck in time and is whirled away on a journey through horror history! Who knows what adventures she’ll find, but they’re sure to be fun…and not without some double entendres. Here is your Major Spoilers review of Elvira: Mistress of the Dark #1 from Dynamite Entertainment. BACK IN BLACK AND TWICE AS SASSY

I didn’t know exactly what to expect from Elvira #1. No, let me rephrase that – there were a lot of things here that are exactly what I was expecting. But I was also surprised, and I enjoy when a book surprises me. It starts out with Elvira stalking a very classic vampire, but this is only a movie being filmed, and the script is terrible, and there are problems on set, and this is the excuse to get the real story going. Elvira goes back to her trailer to find an open coffin and a mysterious vortex. Someone pushes her into the vortex, the coffin lid slams shut, and off we go. The writing here is true to form. Elvira is quick-witted and has a snide sense of humor. She ends up in a villa on the shores of Lake Geneva, and meets up with Lord Byron, Percy Bysse Shelley, and Mary (Wollestonecraft) Shelley. They are looking for their companion Doctor Polidori.

This is a terrific premise. Historically, this group of people (well, minus Elvira) did spend time in this villa, and a night of ghost stories there was the origin of both the first modern vampire story, and Frankestein. How utterly perfect! Anyway, Doctor Polidori was spirited away by a mysterious shadowy figure and the others are looking for him. Elvira joins the search, with plenty of wit and a few double entendres thrown in for good measure. They find the evil being, who promptly knocks out the men and decides, in classic monster fashion, that they are both to become his brides. Throughout this, Elvira cracks jokes and makes pop culture references, and no one in this time period understands her. She also breaks the fourth wall, not to mention being a total fangirl for Mary, encouraging her to consider writing, because this meeting happened before she wrote Frankenstein. She and Mary lead the bad guy to the coffin Elvira arrived in, and by tricking him, shove him in and the vortex takes him away. Then the vortex sucks Elvira back in, and this time she lands in a graveyard, only to meet Edgar Allen Poe.

HORROR WITH A FAIR BIT OF CLEAVAGE

Elvira Mistress of the Dark #1 is a light-hearted and playful take on horror stories. They would seem to have been granted likeness rights for Cassandra Peterson, as Elvira really does look like herself. Her hair may be a bit bigger than we’re used to (and possibly her breasts as well), but after all, what is the point of comics art if you can’t have some fun with this? The story mainly takes place on a horror movie set, or in the early 19th century, so the lighting is dark and there are plenty of dramatic shadows. The costumes and settings look great. Elvira does show a lot of leg and a whole lot of cleavage. (Well, duh!) You could say that cleavage is ever-present, but is not to the point of always being the focal point of the page.

The men in the story have been given somewhat short-shrift; they aren’t as detailed as Mary and Elvira. But they do get knocked out and the story is really about our two main ladies which is a refreshing take on the 19th century. I love the old horror classics, and I am looking forward to the next issue already.

BOTTOM LINE: IF THIS IS YOUR THING, GIVE IT A TRY

Unless you’ve been hiding under a rock for the past 30 years, you know who Elvira is and what she’s like. If you love the Queen of Halloween, Elvira Mistress of the Dark #1 should be right up your alley. If you like some humor with your horror, give this a read. If, on the other hand, you like your horror dead serious with blood, guts, and on-panel dismemberment, this is probably not for you.

Elvira: Mistress of the Dark #1

“It came from the wine cellar!” “Who has the corkscrew?”