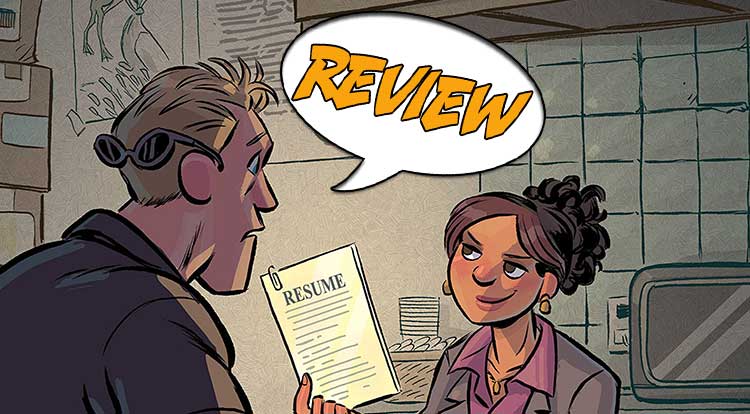 It’s another day in the life of the folks at Jog Mobile. Will Christian finally hire a good employee? Will Devin ever be able to get to his sandwich? And why are there Styrofoam peanuts all over the breakroom? Here is our review of Cellies #2 from Lion Forge Comics. Previously in Cellies: We met part of the Jog Mobile crew at the midnight release of the Sanstar 6 phone. There was a horrible freak coolant accident with the phones, and manager Christian had to go out and placate the hordes of customers there for the now-canceled release, while Devin, Rey, and Jerry followed through on his orders to stay inside and not let anyone in.

I think humor in the retail workplaces strikes a chord with a lot of us, because we’ve either been there or at the very least, we probably know someone who has. Cellies #2 introduces us to a few more characters. They’re all fairly broad, but they cover enough variety that there is plenty of room for potential conflicts among them. Here we meet the lovely Parker, whose dad owns Jog Mobile, and Elena the MBA, who wants to use a job in retail as her doorway to a job in corporate. We also get to know a few other characters from the other stores in the strip mall.

As the day goes on, we learn more about everyone. Devin horses around with his friend Pete, from the hot dog place in the mall. Pete seems to have romantic thoughts about every female character we’ve met (but not in a creepy way, thankfully). And we find out Christian texts Parker (and others) about everything he does during the day. (Very handy if you want to keep track of the boss!) Then we get to the interview, which Christian holds in the breakroom, so no one can get their lunches. In true retail fashion, no one wants to be the one to interrupt and maybe get yelled at. Parker takes advantage of this to pull Devin out to the natural food store to buy him lunch.

Christian interviews the ambitious Elena, who runs rings around him and gets hired. Before he can dig out a Jog Mobile t-shirt for her, he gets a call from the corporate office.  We’re put on hold to follow Parker and Devin. Parker orders fancy smoothies, and Devin wanders around the new world of fancy organic food. After being mistaken for an employee, he is rescued by an old friend (Mariah – who does work there) and starts chatting with her. In fact, he chooses to stay there when Parker comes back with his smoothie. Could Parker be interested in him? It looks obvious to us, but Devin is clueless.

Back at Jog Mobile, Christian’s phone call is to remind him that there is a hiring freeze. How is he going to wiggle out of this one? He doesn’t want to tell Elena she isn’t hired now, so instead, he makes up a test. If she can sell three Bluetooth speakers (that have been languishing on the shelves) in a day, she’ll be hired. And Christian makes his excuse to leave the store.

The cast of characters in Cellies #2 is diverse, which I think makes it even more fun. The art is bold and somewhat angular – a simplified style that fits well with a humor book. Characters are distinct and the creator seems to be having fun drawing them and their range of expressions as the day wears on. Backgrounds are somewhat basic but easily recognizable. Considering this is set in a strip mall, there are a lot of glass windows to be drawn, and they’re drawn well. It’s got a really pretty color tone to it as well – plenty of color, but not super-bright. There is not a lot of action, but the story keeps moving along.

As with many humor books, the characters are all somewhat caricatures that we recognize. Christian is a dude-bro; Devin is a gamer; Rey is a high school student. Even so, they aren’t totally two-dimensional, and they’re genuinely likable. There’s an underpinning of truth in this book which connects with us.

Modern life, where a retail job may be a stepping stone on your way to greater things.