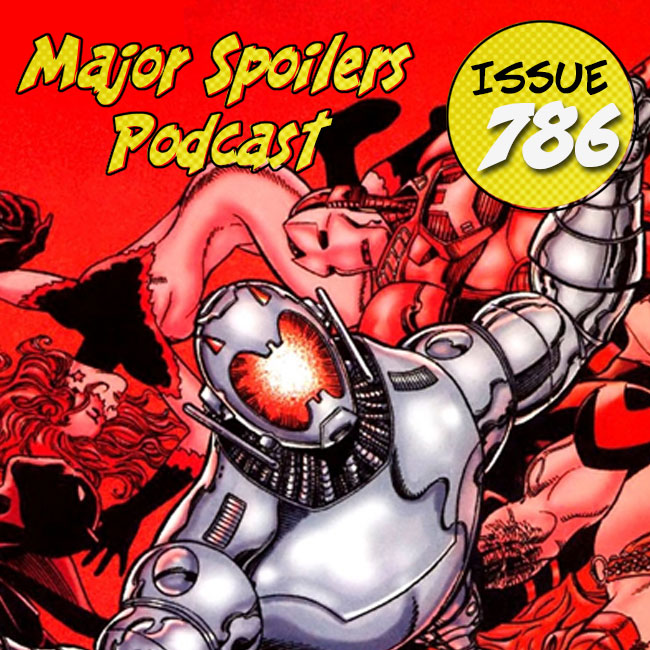 This week on the Major Spoilers Podcast: We look back at 12 years, and how we got here, plus the controversy around that Batman #50 spoiler. Plus we review Batman #50, Sentry #1, Resident Alien: An Alien in New York #4, and Ultron Unlimited from 1999!

STEPHEN
BATMAN #50
Writer: Tom King
Artist: Various
Publisher: DC Comics
Cover Price: $4.99
Release Date: July 4, 2018
It’s the wedding you never thought you’d see! The Batrimony is real as Bruce Wayne and Selina Kyle are set to tie the knot in a can’t-miss, extra-length milestone issue that will reshape Gotham City. All their friends (and a few enemies?) will be party to a comic book coupling for the ages.

THE GOLDEN GUARDIAN IS BACK! FRESH FROM THE PAGES OF DOCTOR STRANGE…
…but is that really such a good thing?
The greatest hero that the Marvel Universe ever forgot has returned! The Sentry – shining sentinel with the power of a thousand exploding suns – is back from the dead, but his troubled mind is far from finding peace. By day, he trudges through a mundane life as Bob Reynolds; at night, the Sentry soars across a gleaming, perfect skyline. But how much of the Sentry’s dual existence is real? And what of his dark other self, the Void?

Jeff Lemire (MOON KNIGHT, Black Hammer) returns to Marvel and unites with Kim Jacinto (AVENGERS: NO SURRENDER) for this mind-bending series that will shake the Sentry, and the Marvel Universe, to its foundations.

RODRIGO
RESIDENT ALIEN: AN ALIEN IN NEW YORK #4
Writer: Peter Hogan
Artist: Steve Parkhouse
Publisher: Darkhorse Comics
Cover Price: 3.99
Release Date: 7/11/2018
Harry has been stranded on earth pretending to be a human doctor for so long, he understands how another intelligent yet marooned alien could fall in love with a human. With his latest mystery cracked, will what Harry has learned in New York City help him finally get back to his homeworld?