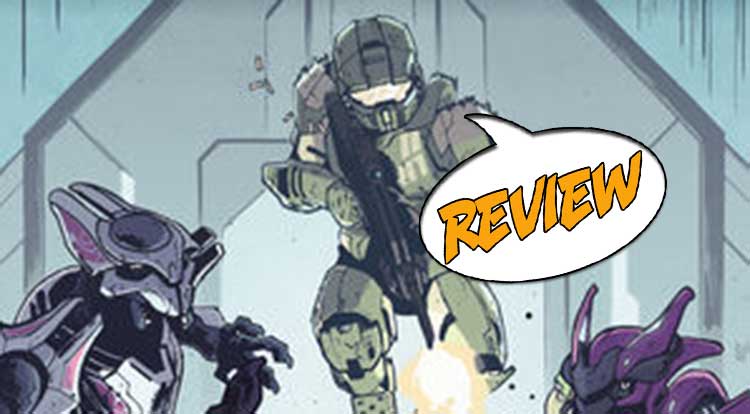 A story of Master Chief when he was simply known as just John-117. A member of Blue Team, John-117 battled the Covenant and started a legend that would outlast his squad, and this is a story of those early days.  Dark Horse Comics presents, Halo: Collateral Damage #2. Previously in Halo: Collateral Damage: Blue Team, a squad of elite SPARTAN soldiers, has arrived outside of Alpha Corvi II and have made contact with the rebel forces that had once been fighting the UNSC. Now, in the face of overwhelming Covenant forces, they have joined forces and launched a counter-attack on the aliens.

As the issue begins, we see the SPARTANS as they attempt a covert infiltration of cavern system below the city, attempting to surprise the enemy troops. As they emerge from the water-filled caves they find themselves face to face with the forces they had attempted to circumvent. Worse yet, as the firefight begins, the troopers of Blue Team find their technology is not to par and is ineffective against the enemy forces.

Topside, the rebel forces are fighting off the Covenant with everything they got, but it looks like it just won’t be enough. Whitaker, the leader of the rebels, tries to reign in his men, who are wanting to abandon the SPARTAN soldiers. As much as he dislikes it, he realizes they are on the same side, and the very troops they would have been fighting just days prior are now their comrades-in-arms. He then sets into motion a dangerous plan to deprive the enemy of their objective, but it entails making things even harder for the soldiers of Blue Team.

Things go from bad to worse as decisions from above will have an effect on the battle below, and the team may be in danger of losing another member.

This issue starts with a great underwater mission (something I wish we had really had in the video games) and the action just continues from there. While we get a fair amount of time from the members of Blue Team, they are so deep in the fight that we get practically no time for any character development, which is probably the only downside. For this series being billed as a Master Chief Story, we got faint little of him this time around. We do get more page time out of the rebels, and Whitaker and his people adjusting to the idea of helping the UNSC is well handled. The rebels make sacrifices for the greater good, and it is really more about them this issue. Alex Irvine (Batman:Inferno, One King, One Soldier) is giving us a good rounded out story here, but I personally would like to get a little of the Spartan view on the events as they happen.

David Crosland (Scarface: Scarred for Life, Yo Gabba Gabba) continues with the unique art for this issue. His art, combined with Len O’Grady’s colors, have a distinctive style that adds to the frantic pace which Irvine sets for the story. There is a nice sense of motion on the page, and it all adds to the experience.

And speaking of which, the cover by Zak Hartong? Spot on great work!

While the first issue set up our conflict and characters, this issue jumps directly into the action and never really slows to take a breath. It a frantic ride with guns blazing, but you really feel the series star may be neglected. The sequences with Whitaker and his troops fill in nicely, but I hope we get some panel time with both him and the SPARTANS, and get a view of how they are really seen by the average man.

Overall, I enjoyed the issue, but one thing nagged at me. Something about the art, the Covenant specifically. I wish there had been just a little more differentiation in the look of the enemy soldiers. At times the look and poses seemed so similar it would pull me out of the experience of enjoying the issue.

Another thought this issue made me have was, is this similar to what I may see in the recently announced HALO series from Showtime? Delving into the history of John-117 would be a great way to start, and stories like this could fill many gaps in fan knowledge.

Did I mention the action?

HALO: Collateral Damage #2 from Dark Horse Comics continues an exciting story from the history of the Master Chief.

Sci-Fi war is hard to get a balance on, but the team of Irvine and Crosland are doing so nicely. Looking forward o seeing more.