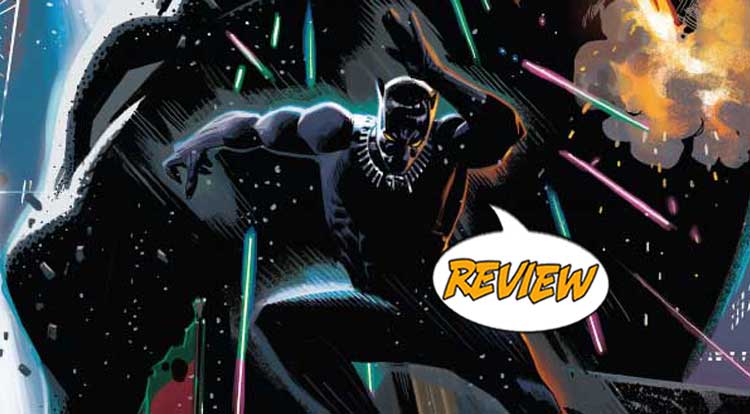 It’s all out action with T’Challa, but perhaps not in the way readers might expect.  Your Major Spoilers review of Black Panther #2 awaits! Previously in Black Panther: Somewhere in space, a nameless slave has risen up against his oppressors.  Taking on the name T’Challa, he has joined with M’Baku and Nakia to fight against an evil empire in space.  But, if he’s just carrying on the name, why is he having vivid dreams of the original Black Panther’s love?

We open in outer space, where the centuries-old Galactic Empire of Wakanda rules with an iron fist.  As this issue opens, a band of former slaves known as The Maroons is making an exploratory run on a Wakandan base, only to find it better protected than they expected.  As they prepare to make a run for it, T’Challa takes his spacecraft in for an attack, engaging the Wakanda ships in combat and expertly destroying them.  Nakia angrily tries to get him to stop, only for him to tell her that he doesn’t need backup and take out an entire squadron, only to need a sudden save.  “Everyone needs backup”, replies Nakia, as she picks him up.  Elsewhere in the Empire, we get our first glimpse of Emperor N’Jadaka, who does not take well to being told that T’Challa has once again escaped his grasp.  He kills the messenger, sends his men to kill the messenger’s entire squad and vows to purge his emperor of T’Challa and his rebels.  As the issue ends, we discover what it is that was so important to the rebels: An artifact known as the M’Kraan shard!

The first half of this issue really feels like the climactic battle of ‘Star Wars’ to me, as Black Panther takes on the role of Luke Skywalker and takes down one ship after another.  Acuña is in rare form in these pages, and his fully-painted pages look great.  The introduction of the Emperor is especially well-handled, showing him in shadow with only the golden portions of his ceremonial garb showing, making it clear that he’s wearing the mantle of the Black Panther.  It’s a creepy moment, made even creepier by the emperor’s clearly evil nature.  I had my questions about the disorienting change of location in issue #1, but this issue provides more information about what is actually happening, while still keeping the mystery of the hows and whys of T’Challa in the future (?) in the background.  It’s still not clear whether this is actually our Black Panther or not, but the strength of the art and the pacing of the plotting overcomes those questions with action and some well-done suspense.

BOTTOM LINE: THE PICTURE GETS A LITTLE CLEARER

In short, this is a real stretch for the character of Black Panther, but I’m totally onboard with that.  The elasticity of iconic characters means that we can get things like X-Men in space or Spider-Man buried alive by Kraven for six issues, and their willingness to experiment makes it clear Marvel is taking T’Challa’s elevation seriously.  Black Panther #2 isn’t what I expected when this book was announced, but the story is engaging and the art is excellent, making for 4 out of 5 stars overall.  It’s worth the price of admission to see T’Challa piloting a space fighter in battle, as far as I’m concerned.

Things are starting to come into focus, but there are still unanswered questions... Gorgeous art from cover to cover, though.