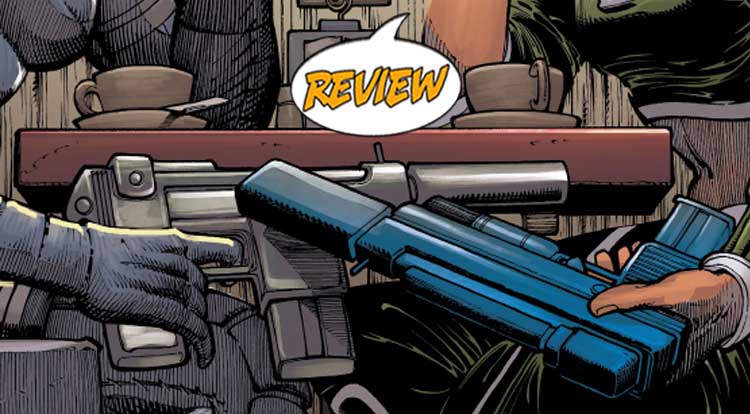 The Silencer has to help out an old colleague who is in mortal danger.  That’s complicated enough, but when the friend is Talia al Ghul and the mortal danger comes from Leviathan?  That might be fatal.  Your Major Spoilers review of The Silencer #6 awaits! Previously in The Silencer: Talia al Ghul has hired Silencer to make one last hit.  Unfortunately, it was on one of her own Leviathan underbosses, meaning that not only is Silencer back on the radar as a professional killer, Talia has triggered a civil war within her own organization.  Looks like the only answer is for Silencer and Talia to go on a murder spree…  just like the old days!

A RUNNING BATTLE IN A ROADSIDE DINER

We open with Honor Guest alongside her old boss, Talia, basically murdering an entire squad of Leviathan’s assassins, while Honor’s son hides safely inside one of her silence zones.  Their relationship has always been a complicated one, and now that Talia has painted a target on Silencer’s back, it’s even bumpier.  That said, they make a particularly lethal team, and manage to cut a swath through all their assailants in no time, bickering all the way.  With the assassins dispatched, Talia forces Silencer to choose whether or not she’s back in the game (and Leviathan’s employ), only to be shocked when the answer is “No.”  Talia takes it upon herself to change that answer, by murdering Silencer’s son…

…and that’s when Silencer stabs her right through the heart.

KIND OF A SPLINTERED NARRATIVE

We’re six issues into this series, and I still don’t feel like I have a handle on Honor Guest’s character.  Is she a John Wick figure, forced back into a game she no longer wants to be a part of to protect her new life?  Or is she more of a Jason Bourne, out for vengeance?  Is it a problem that her motivations seem to fall so snugly into the expectations of so many filmed stories in a similar vein?  Abnett’s story this issue focuses on the personal beef between Talia and Honor in a way that feels like it should be more satisfying than it is, especially given the personal stakes for our protagonist.  Instead, I’m still unsure about it all, and the fact that she’s taking her family on a faux vacation in order to get closer to Talia’s headquarters leaves me once again unsure.  Also, that’s a terrible idea.  Bogdanovic’s art is much smoother than that of previous artist John Romita, Jr., which I have to say I appreciate and enjoy, especially his removal of the odd “baseball cap” brim from her headgear.  Of course, that change in art also means less inventive layouts than Romita, as well as a much more “Generic New 52” feel to the art.  Is it better to be challenged by art you don’t enjoy or content with art that doesn’t challenge itself?  It’s kind of a tossup for me.

BOTTOM LINE: I LIKE THE ART BETTER THAN THE FIRST FEW

The Silencer #6 is equal parts action and unanswered questions, and seems to be building to a big confrontation between Honor and her former boss, but it’s hard to get engaged in the story without a clear feel for who she is, and the aimless feel to the plotting (which I’m attributing to the art-before-scripting process, a problem I’m having with a lot of the New Age titles) leaves us with a right-down-the-middle 2.5 out of 5 stars overall.  I’m not sure how DC is assessing the experiment of the New Age of DC Heroes, but this installment makes for another maddeningly inconsistent read.

A change in artist leads to a different feel, but it's still hard to figure out who our hero truly is...