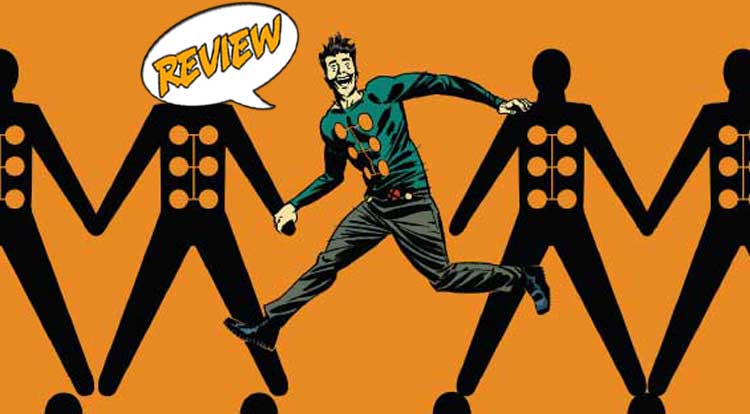 Jamie Madrox is back in action.  But…  isn’t he dead?  Your Major Spoilers review of Multiple Man #1 awaits! Previously in Multiple Man: One of the strangest of adjunct X-Men, Jamie Madrox actually may not be a mutant at all.  Of course, that didn’t make him immune to the Terrigen Mists which, once unleashed on Earth, were fatal to many mutants, himself included.  So, if he’s dead, are we looking at 20 blank pages?

So, I like the fact that these creators begin with the latest New Mutants team investigating a secret room somewhere (the story doesn’t really specify where), only to find a strange man inside.  Magik teleports him back to X-Men headquarters and The Beast, where he is identified as Jamie Madrox.  Or at least, he’s one of Jamie’s duplicates, who was sealed off in the lab for unspecified reasons by Prime Jamie.  The dupe is less-than-thrilled to find out that, thanks to the death of his original, that he is in the process of multiple organ failure, and certain to decompose and die within days, unless the Beast can find a cure.  Before he can, though, Multiple Man clocks Bishop over the head, steals his time-travel technology and disappears.  Not long after, Jamie returns to check on Beast’s serum.  Then, another Jamie arrives to tell him NOT to make the serum.  Then more and more superhumans arrive, each looking with mash-ups of other characters, like a Deadpool/Wolverine hybrid with Psylocke’s claws…  all of whom are ALSO Jamie Madrox.

ENTHUSIASTIC, BUT MORE THAN A LITTLE CONFUSING

This issue has enthusiasm on its side, certainly, and the opening has potential.  I like the return of quippy Jamie Madrox, especially in his interactions with old pal Guido and Hank McCoy, but as soon as he attacks Bishop, the story kind of goes off the rails.  I suppose that the chaos is kind of the point of this first issue, but it’s very confusing and a little off-putting to read this issue and have so little of the story be clear.  MacDonald’s art is very spirited and energetic, and I like his younger-looking Jamie Madrox, but all the featured X-Men seem younger than expected.  The action sequences are very well-done, though, and the backgrounds of the X-Mansion are lush and well-rendered, which makes for some nice pages to look at.  I had similar issues with Rosenberg’s recent New Mutants run, which was similarly frenetic and random, so I think this book and/or this writer just may not be for me.

BOTTOM LINE: NOT TO MY TASTE

When a character has been so well-defined by previous authors, it’s often hard to find your own take on them.  Rosenberg, MacDonald and the creative team do find a different angle on Jamie Madrox, but Multiple Man #1 ends up with a few too many moving story parts, making for a confusing second half that threw me as a reader, even with strong art, earning 3 out of 5 stars overall.  It’s another example of a comic book that has an even balance of problems and successes, making for a reading experience whose inconsistency leads to frustration.

Starts strong, but flies off the rails quickly, even with strong art and some fun takes on X-Men characters.