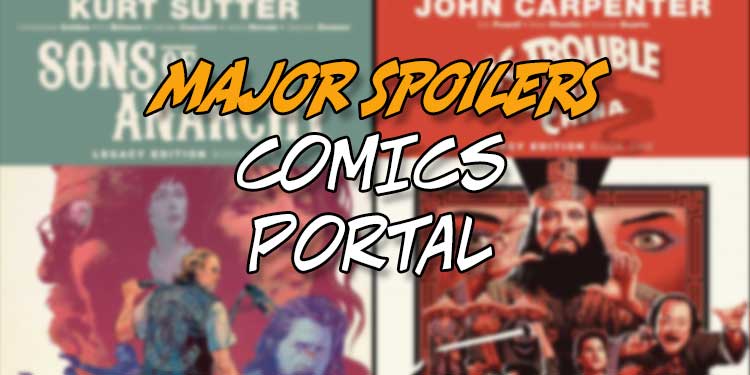 As previously reported at MajorSpoilers.com, BOOM! Studios is beginning a Legacy Edition series, mostly featuring comics created by them that are based on TV series’.

Can other Legacy Editions be far behind?

Let me weigh in on this subject!

CAN COMICS BASED ON POP CULTURE SELL? Here’s the important part of that news release:

The first LEGACY EDITION softcover collections will arrive in late 2018, beginning with a top-secret, currently unannounced series, and then continue into 2019 with top pop culture franchises

The initial series has yet to be announced, as it says, but we know that future ones will focus on Sons of Anarchy and Big Trouble in Little China, both pop culture events with very devoted followings.

Why do this? Well, here’s the reason, from the news release:

As we know, franchises like Star Trek and Star Wars have sold novels and comics based on them. Perhaps these will do likewise?

BOOM! has had success with Garfield, The Muppets and other pop culture phenomenon, so why not at least give it a try? And I’m sure I could mention other pop culture-based comics that have done well, not from BOOM! Studios, too!

SOME FANS JUST WANT IT ON THE SMALL OR BIG SCREEN I’ve often spoken with fans of shows of TV shows and movies, asking them if they would support comics based on them. The response varies.

I was at a sci-fi convention talking about Babylon 5 comics when one devoted fan reacted angrily. “I shouldn’t have to go to a comics shop in order to get the whole story! I don’t like it! I won’t buy it!”

There are those on the other side of the spectrum, though. If you look at the sales for Star Wars, well, they’re through the roof, mostly when the comics come from Marvel, although the Dark Horse ones did well, also.

I don’t know how these comics will sell, frankly. I know some fans of Sons of Anarchy, and one does buy comics, but he was on the fence regarding this development. It will depend on how trued to the show the books have been, he said. I never got into that TV show, though, so I don’t have an opinion on it.

If not these franchises, what about Power Rangers? There have also been Steven Universe and Adventure Time from the company. That last one even crossed over with Regular Show. Bill & Ted Save the Universe, maybe? Or Dark Crystal, Fraggle Rock and Labyrinth? I would imagine the Kong books would also move!

LEGACY SHOULDN’T ONLY BE FOR TV OR FILMS

Honestly, BOOM! has produced some wonderful comics tales over the years. I think they’d work well in this Legacy format.

Mark Waid’s Irredeemable and Incorruptible immediately jump to mind. Granted, they have been printed in collected form, but now that Mr. Waid’s writing for the House of Ideas, maybe his audience has widened some. Lumberjanes could also work. And Klaus around the holidays!

I think BOOM! Studios is on to something here! And I’m always for adding new readers to our ranks, so I’ll support this effort as much as I can!

What do you think? Will fans of pop culture franchises like Sons of Anarchy pick up comics based on the show? Or should BOOM! have left well enough alone, selling back issues? Whatever your opinion, please share your thoughts in the space below!