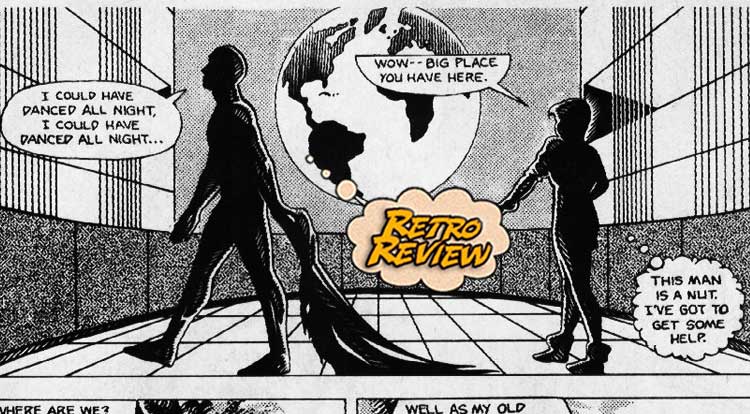 Previously in Thunder: Founded by Gary Brodsky (whose father, Sol, was not only the company namesake, but a well-known exec at Marvel Comics for years), Solson Publications was a fly-by-night comic company in a classic 1940s “grab the cash and disappear in the dead of night” vein.  Their library is dominated mostly by “How To Draw” books, many of which explicitly use the word “sexy”, but also includes ‘Sultry Teenage Super-Foxes’ and the legendary mess that is ‘Reagan’s Raiders.’  With three issues published, though, ‘Raiders’ is actually Solson’s longest-lasting comic title, and is an example of their zeitgeist-chasing tendencies.  Due to copyright registration problems in the 1960s, Tower Comics’ T.H.U.N.D.E.R. Agents were believed to be in the public domain by 1987, with several companies trying to cash in on their legend, leading Solson to take their own shot at the property.  We begin Thunder #1 in the future (of 1987), early in the 21st Century, after the collapse of the United Nations due to a wave of American protectionism triggered by the Reagan administration… Some of the descriptions of the future dystopia in this issue are a little unnerving, especially the parts about closing off the borders, ejecting all foreign-born people and eschewing the United Nations, but the part about the evil stormtroopers of the ethno-state are still fantastic nonsense, thankfully.  It in these streets that we first meet Lyn Brown and her brother Joe, who are fighting to maintain their own freedom in the face of not only the fascist government, but other gangs.  When Joe is shot trying to preach unity, he begs his second-in-command to get Lyn to safety.  There is a great deal of high-school civics nonsense thrown about in these early pages, and the tone of both dialogue and art make it clear that ‘The Dark Knight Returns’ is high on the list of influences for this series.  Fleeing into the night, Lyn and Brad search for a bolthole in which to hide, only to find a strange holographic entrance. Brad encounters sentinel droids who take him into custody, while Lyn tries to escape.  Elsewhere, an alarm goes off indicating their intrusion, announcing a breach in a classified facility called “Thunder Mountain.”  When the word reaches Commander Wylie, once known as ‘Weed’ of the T.H.U.N.D.E.R. Squad, he immediately hits the panic button, worried that “he” is up to something.  But who is this mysterious “he”? This page is a perfect example of the art issues I have with Thunder #1.  NoMan is weirdly elongated, which feels like it MAY be an attempt to emulate Dave Gibbons.  Unfortunately, nearly everyone in the issue (save for Lyn herself, who remains remarkably consistent) has the same stretchiness in their portrayal.  As for the story, having long ago transferred his consciousness into an android body, Professor Dunn is the one Agent whose powers could not just be taken away with his special device.  Unfortunately, years of disuse and neglect have left him…  Well, NoMan’s just not all there any more.  When Lyn identifies herself, his databanks erroneously equate her with former T.H.U.N.D.E.R. Agent Len Brown, AKA Dynamo.  Tony’s malfunctioning computer brain wonders what “gool ol’ Len” has been up to, triggering a flashback.  I get the feeling it’s supposed to be a ‘Watchmen’-style transition, but it just feels like a non-sequitur. Len, now a widower thanks to the death of his wife, once called the Iron Maiden, is dropping off his two daughters at grandma’s house due to a mysterious trip “out of town.”  Back at Thunder Mountain, though, NoMan’s brain officially decides that Lyn IS Len, and proceeds to fetch his Dynamo costume out of storage.  Rambling like the made-for-TV-version of someone with mental illness, he rummages around for something, while Lyn gets dressed.  The costume is far too large for her, but thanks to a pair of stockings that NoMan inexplicably gives her, she is able to wear it as an 80’s style minidress.  (The question of why NoMan would give his old partner what are clearly women’s stockings is one for the fan fiction writers, I suppose.  But we don’t judge.)  As Weed Wylie, the rival gang and her partner converge on their position, NoMan invites her to turn the dial on the belt, “so that we can get started…” For those not in the know, Dynamo’s Thunderbelt, when activated, gave him super-human strength and invulnerability for a short time, which means Lyn just got the means to deal with the problem of being targeted by a rival gang that speaks French.  Sadly, that’s not just the last page of the issue, but the end of Solson’s Thunder, as the question of copyright was not as open as they might have thought.  Solson ceased publishing by the end of 1987, for reasons as much to do with their publishing practices as the relative merits of their comics.  Which is not to say that the comics are good, because they are not.  Thunder #1 is a book that I own solely for completist purposes as someone who loves the T.H.U.N.D.E.R. Agents and one that I would not recommend due to it’s wordy, overwrought story filled with clichés or the strangely elongated art that swipes from half a dozen different sources, earning 1.5 out of 5 stars overall.   There is probably a fascinating story to be told about Cold War-era super-spies facing the strange world of the 21st century, but if so, it won’t have a Solson logo* on it.

*In fact, just as a rule of thumb, if you encounter a comic that* HAS the Solson logo on it, don’t pay more than 25 cents, and ideally avoid on sight.  You’ll thank me later.

This book desperately wants to be "The Dark Knight Returns" for the T.H.U.N.D.E.R. Agents... It is not.