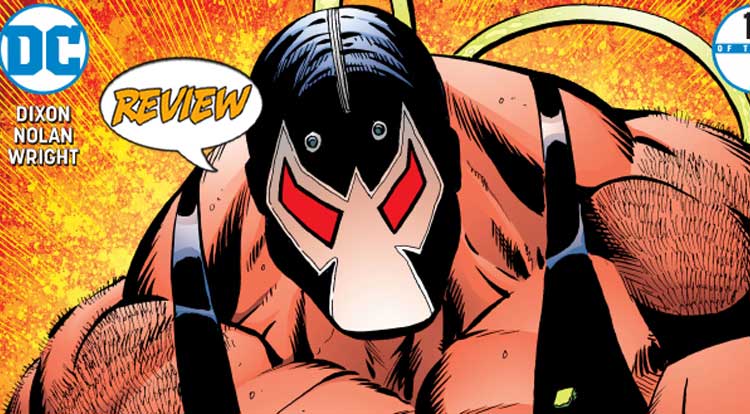 The battle for control of Kobra concludes.  But will the victor be The Batman or the man who broke him?  Your Major Spoilers review of Bane: Conquest #12 awaits! Previously in Bane: Conquest: Raised in a terrible prison, the man known as Bane grew to adulthood powered by rage, ruthlessness and a drug called Venom that he pumps directly into his spine for some reason.  With the leadership of Kobra in flux, he has made a play to take over the worldwide conglomerate of evil and cultiness.  But he didn’t count on his team being infiltrated… by Batman!

THE CREATORS OF BANE RETURN

We open with a firefight and a bit of light exposition, as a group of villains including the KGBeast open fire on minions of Kobra, all the while explaining that Bane has left them and Batman has been a spy in their ranks.  It’s a bit awkward, to be honest, but Dixon’s tough-guy dialogue is kind of a hoot.  When Batman appears, he has possession of the baby that the Kobra cultists believe is their Naja-Naja reincarnated, only to get waylaid by Valentina (and I’m not sure if she’s a Valentina we’ve ever seen before, and the story’s not really much help on that front) in a mechanical exo-suit.  Bane arrives, quickly over-powers her in a very anti-climactic moment, and everyone makes a run for the hills as the facility starts to self-destruct.  Bane and Batman meet face-to-face for their “custody battle”, which Batman wins with a few armor-piercing remarks about Bane’s childhood.  With a snarl of “Maldicion!”, Bane turns and fights off the Kobra cult, while Batman makes his escape with the baby.  The villain contingent is suddenly confronted with someone from Apokalips (Perhaps Kanto?  The story doesn’t really make it clear.)  Suddenly, the issue is over, with Bane hitching a ride on Batman’s submarine, Valentina murdering her rivals for leadership of Kobra and a baby left on the steps of the Gotham City orphanage.

This issue is pretty much all action, and on that score, it’s…  okay?  There’s a setup for a big battle involving Valentina’s mech-suit that just fizzles, and Batman and Bane barely throw a single punch at one another.  Of course, that may be the point, as this issue wants to make it clear that he’s as noble as Batman in his own way, perhaps just a misunderstood anti-hero all along.  I don’t know that I buy that particular bill of goods, though.  As for the art, it’s pleasantly retro, making this book look like a throwback to the 90s era that made Bane a household name.  Nolan’s biggest issue in Bane: Conquest #12 is in differentiating character’s faces, which makes some of the arguments between Bird and KGBeast hard to follow, as they’re drawn nearly identically in wide shots.  There’s also a general paucity of backgrounds at several points that affects my ability to follow what’s happening with the art.  I do enjoy the last scenes of hero and villain calling a truce, with Bane slumping into the seat next to Batman and announcing that he’s going to sleep.  It, like so many of the scenes in this issue, has great dialogue and reads well as long as you don’t expect it to combine into a complete, satisfying issue.

BOTTOM LINE: A BIT OF AN ANTI-CLIMAX

All in all, Bane: Conquest #12 isn’t a bad comic book, it just doesn’t feel like a complete one, and while the dialogue and situations are fun (especially Gunhawk getting rattled at the sight of Batman and immediately turning tail), the action and dialogue doesn’t seem like it’s in service of a coherent plot, earning 2 out of 5 stars overall.  With a little more setup, some explanation in these pages of the stakes of the conflict between Bane and Batman and a little more crunch in the climax, and this would have been a great comic.

Featuring a lot of fun tough-guy dialogue, stakes that aren't explained, consequences that don't seem proportional and a cast of thousands, few of which are named...