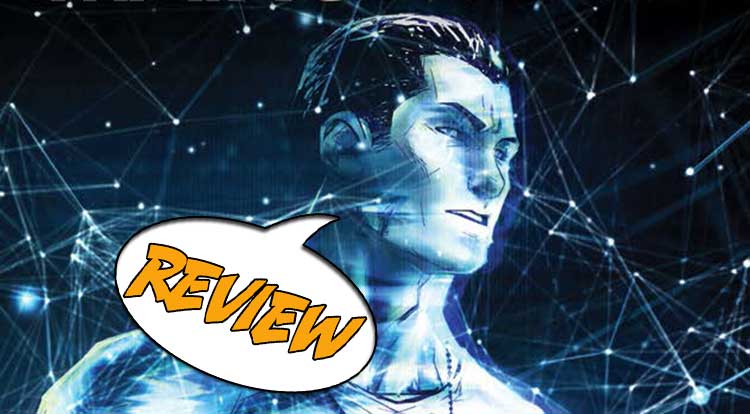 One minute Chicago Police Detective Nate McCallister was interrogating a prisoner, the next, he was jumping through a black hole leading to a secret facility filled with people who felt the need to point weapons at him! What’s a cop to do? The multidimensional conflict continues as we slip into The Mainstream #3 from Zenescope Entertainment! Previously in THE MAINSTREAM: After murdering his other-dimensional counterpart, scientist Franklin Hodge began bringing others from his home dimension to this one in an attempt to save their world from destruction. Now they plan to find a way to start moving as many people as they can into the effort to save their world, even if it means killing their alternate selves on this one. Meanwhile, Detective Nate McCallister has just pursued an escaping suspect through a hole in space, and finds himself in a position that he would have never imagined.

We pick up directly after the events of issue number two with the other Franklin Hodge, having brought his new companions back from the brink of madness via some Lobot-esque headgear, explaining how he plans on saving their world. It seems he was able to access the base of The Keeper’s, a location called The Epicenter, when he first crossed over. He knows the location of the base, and it’s working displacement doorway. However, he needs allies to take it, and one of his new companions is the alternate version of Nate McCallister’s partner.

Speaking of McCallister, he is only seconds behind his escaping suspect, the mysterious red-haired woman named Kate. Kate also happens to be the acting director of The Keeper’s, replacing Hodge after his murder, and she tries frantically to diffuse the situation as Detective McCallister appears in her headquarters and quickly takes a hostage.

By the end of the issue, the other-dimensional people have made a major move, and McCallister may be in a no-win situation.

Continuing the events of the first two issues, Michael Dolce (The Sire, Descendant) and Talent Caldwell (Killian’s Tide, Gen13) continue to unravel a high concept tale of inter-dimensional danger and desperation. Franklin and his newly arrived cohorts don’t believe their evil, they think they are on the side of good as they try and figure out a way to save their homeworld. However, that’s what most villains believe, and it looks like that will hold true here as well. The action is quick and the story still moves along at a fast pace, but unfortunately, it may still be moving too quickly. We have arrived at the third issue of five and there are still a lot of unanswered questions; the good guys are pointing guns at each other while the bad guys are advancing their agenda. You still get a solid 22-pages of story, but it still feels like some major plot points are still not paid off. That said, we end on another excellent cliffhanger and you do find yourself wondering how it will unravel.

MORE SOLID ART FROM TONY MAY AND JORGE CORTE

As I stated last time we gathered to discuss The Mainstream #2, this art team is not exactly what I expected based on the Talent Caldwell cover art. That said, having lived another issue with these characters, it feels just as good. While Moy’s pencils vary from Caldwell’s greatly, it feels more established in this issue. I dare say that the art has improved somewhat in this issue, but there are still a few panels that make you look at them and wonder how that move would work in real life.  Jorge Corte’s colors add great depth to Tony Moy’s work, and his use of color as a hard backlight to physical edges as well as a light accent, solidify the work visually.

Going into the third issue with more knowledge, I was expecting a little more payoff. There are two stories here, three if you include the overall plot, and while one seems to be flying along the other keeps hitting the breaks. The concept is good, the plot is solid, but the progression could still use some work. Finishing up this issue, I began to wonder about the process, was it done using a full script, was it done plot first? That may explain some of my issues with how it all flows together.

But here is the standard of a good story, I’m still around. I’m willing to stick with it just to see how it plays out. I’ve enjoyed the concept which Caldwell and Dolce have put forward, while Moy and Corte’s art is different enough from everything else out there that it is a nice change. I will be around for another shot, I just hope that as we start the next issue, that we get more answers than we have to this point.

As we start this third of five issue series, there are still some plot points unanswered, but it seems we are closer to finding out the answer to some of the mystery.