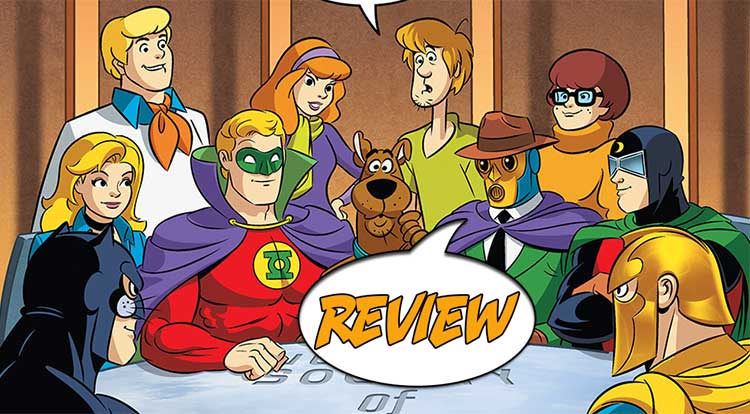 The greatest team of mystery solvers team up with the heroes of the greatest generation to combat a dark evil from ancient time. Can they save the past to save the future? You’ll find out in Scooby-Doo Team-Up #39 from DC Comics! Previously in Scooby-Doo Team-Up: The Scooby-Doo Team-Up title has seen the Mystery Inc. gang join forces with everyone from Space Ghost, to Krypto and the Super Pets to Batman. But with this issue, they are drawn into an adventure which takes them back seventy-five years, and into a conflict with an immortal evil, aided by the greatest heroes of their generation.

So, you find a box buried under the Lincoln Memorial and it says, DO NOT OPEN. Naturally, you don’t open it until you have it inspected by the leading minds in archeology, right? Wrong! The box is opened in front of an audience in the first page of “Victory Through Scare Power.” Upon opening the box and unleashing a horde of ghosts/demons to who declare they are on a mission to destroy the Washington Monument, the Mystery Inc. team is whisked away by Doctor Fate to a time seventy-five years prior. To solve the problem in their time, they first have to help the Justice Society of America to stop them in their time.

Scooby and the gang discover that the box is part of a plot by Vandal Savage to conquer the world. Vandal unleashes the Spirits of Destruction from Pandora’s Box (yes, that box) to aid the Nazi spies and saboteurs who are spying and sabotaging the United States in an effort to bring about a Nazi victory in World War II. In the style of the old Justice Society tales, the team splits up and a group of heroes confronts the evil at various locations, this time with Scooby-Doo and his people in tow. Wildcat, Wonder Woman and Daphne investigate an Army Air Corp testing field. The Atom, Green Lantern, and Fred attend a War Bonds promotion. Doctor Fate, Dr. Mid-Nite, and Velma attend to the youth of America. Sandman, Flash and Scooby head to a scrap yard. Finally, Johnny Thunder, Black Canary, and Shaggy confront the evil at a shipyard where they are joined by Red Tornado! Finally, all the heroes re-convene to confront Vandal Savage himself as he prepares to attack the Washington Monument and the Capitol Building.

That’s a lot of action for a single issue!

A MESSAGE FOR TODAY FROM THE PAST

As the story unfolds, Sholly Fisch (Action Comics, Batman: The Brave and the Bold) gives a glimpse into the past with a story format that is simple and fun. There are several standout moments in this issue, one of my favorites being Daphne and Wonder Woman’s discussion of her status as secretary for the Society. The characters are surprisingly well matched in their teams, and the one-liners are great!

The idea of women working in shipyards, buying war bonds to support your troops, and even just sabotage in general may seem like something out of the movies for recent generations, but it was a real-world issue back in the days of World War II. As odd as it sounds, it is nice to see them brought up in this way, and even the idea of a fifth column is brought up and handled nicely.

While Scooby-Doo is not exactly the first stop for superhero tales of a high caliber, Scooby-Doo Team-Up has a solid track record of giving us just that. This tale, in particular, contains more superheroes than you can toss a Scooby snack at, providing non-stop fun. Sholly Fisch is great at spinning simple tales that entertain, and he manages to slide some messages into this one as well. Dario Brizuela (Batman ’66, Teen Titans Go!) delivers the spot on Scooby-Doo style and gives a friendly Justice Society of America that I would love to see regularly.

Scooby-Doo Team-Up #39 is a trip to the past that entertains us here in the present, add it to your buy pile today!

A great book featuring heroes that sometimes seem forgotten at the DC offices, wonderful treat for fans of those original characters