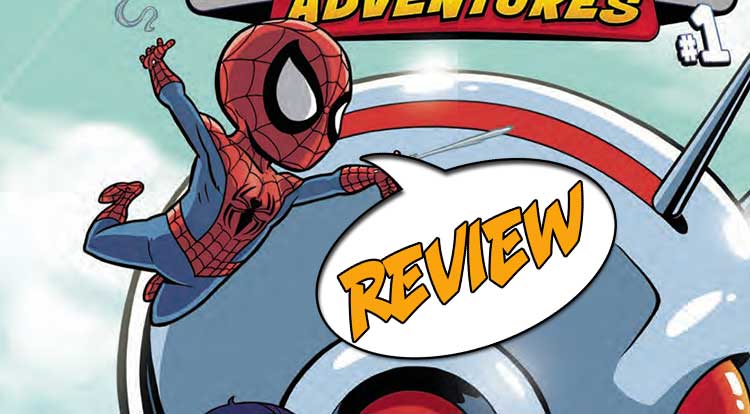 Spider-Man, Spider-Man, does whatever a spider can, except get along with his friends? See what happens when Web-Head teams up with Stinger and Hawkeye to rescue Ant-Man from Taskmaster in Marvel Super Hero Adventures #1, Webs and Arrows and Ants, Oh My!, out now from Marvel Comics! ALL-AGES ADVENTURE WITH A LESSON

This month, in Marvel Super Hero Adventures #1… wait a minute, what? We just had a first issue of Marvel Super Hero Adventures, didn’t we? Well, yeah-kinda-sorta, but more on that later. In this first issue, Spider-Man swings by his old high school and finds a pair of kids assigned to work on a science project, but they have completely different points of view. A small explosion later, and Spidey is telling a tale of the time he didn’t get along with somebody, and how they learned to use each other’s strengths to get a job done.

Stinger, aka Cassie Lang, contacts Spider-Man for help. It seems her father, Scott Lang aka Ant-Man, and she were investigating stolen weapons when he was captured. Cassie escaped with his phone and searched his contacts to get help, help in the form of Webs. As Spider-Man meets up with the younger hero, he finds that she also called her friend, Kate Bishop aka Hawkeye. Spider-Man quickly finds that he and this Hawkeye don’t seem to get along, but the three head out to save Ant-Man regardless. But when it’s discovered that Stinger and Ant-Man had been on the trail of The Taskmaster, can the heroes stop arguing long enough to save Cassie’s dad, or will their bickering cause them to fall short of the task at hand?

THE MORE YOU KNOW IS HALF THE, WHATAMINUTE…

Marvel has a great history of selling their characters to a target audience. From the old Spidey Super Stories, to the Target exclusive kid-focused reprints, to the Super-Hero Squad, Marvel knows how to market to young kids. With Spider-Man, they have a character that children love, and they aren’t afraid to use him.

Writer Jim McCann (Dazzler, Hawkeye: BlindSpot) uses a smart framing device for his story. Spider-Man comes upon a situation, and while on the first page, begins to help everyone involved by recounting a tale of when something similar happened to him. The lesson will involve another hero, or heroes, as they battle a dangerous foe. But at the end of the adventure, everyone has learned a valuable lesson and the villain is captured. We return to the present to get the denouement and see how it pertains to the people Spidey is helping. It’s relatively simple, but that fact in no way diminishes any of the enjoyment you receive from the story.

Dario Brizuela (Avengers: No More Bullying, The Avengers In Gearing Up#1) pulls a little artistic magic in this issue. He starts off drawing a more realistic, proportioned Spider-Man page, and when Spidey starts the story, he swaps to a cartoon style reminiscent of The Super Hero Squad, but not quite. Not only does it signify where you are in the story, but the change in art styles changes the tone. It’s a little more whimsical, a little more friendly. Kids are drawn to it in a way they may not be to other at.

BOTTOM LINE: GOT YOUNG KIDS? THIS IS GREAT FOR THEM AND YOU!

A young emerging reader would be able to handle this book with little problem. The plot is spelled out, and there is no great mystery that will carry over and complicate matters. The familiar style of art is one they can try and emulate themselves, I know mine did, and it is a fun read. Adults will enjoy it because it is a done-in-one tale, just enough of a palette cleanser before you get back into the mature and angst-ridden stories that we all know and love.

Now, about that numbering. As I mentioned, there was a previous issue of Marvel Super Hero Adventures, and it too was a number one. This issue is a number one as well. So what gives? Well, I have no real connection to the Marvel Bullpen, but I am pretty we can say it is all about marketing. Young reader comics don’t sell as well as regular books geared to adults, but first issues do. By putting the story title on the cover, and marketing the book with that title as a first issue, it may attract more attention. Other than the framing device, there seems to be no real continuity connecting the issues. I have no problem with it, but it does make it a little tougher to make sure you have gotten all the issues that have been released to date.

Regardless of the numbering, this is a fun book. Including Ant-Man gives us a tie us into the upcoming movie, again possibly boosting sales, and we get to see a fun story with a little something for everyone.

Oh, and next month it looks like a certain marvelous heroine and a teleporting dog will get the spotlight beside Spidey! I can’t wait!

Marvel Super Hero Adventures #1 Webs and Arrows and Ants, Oh My! Is a great little read, and your kids will dig it too!

It’s a fun book that you could give to even the youngest reader and known they could enjoy it….