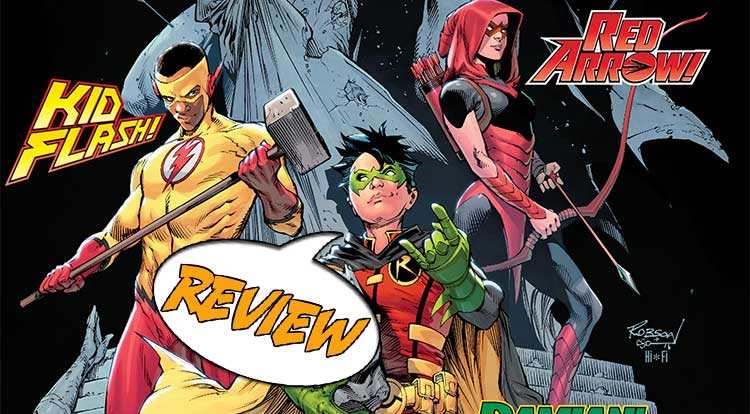 What happens when a trio of legacy heroes find they don’t want to play by the adult’s rules any longer? Do they drop out, or do they write new rules? Let’s find out in Teen Titans Special #1 from DC Comics! Previously in the DC Universe: The events of the Metal and No Justice have set the stage for a new order of heroes within the DC Universe. With a new status quo being handed down from the heavy hitters, how does the younger generation of heroes respond? Are the kids alright? What do you think?

This special takes a page from the anthology format by giving us three stories focusing on three different characters, all by the same creative team.

The first story, “Things Done Changed”, stars Robin as he returns to Gotham City after the events of No Justice. Although we start the story with angry Robin, this is Damian after all, taking out a fleeing criminal, the story itself starts a short time earlier in a small restaurant called Tarbooshes. After having come to know Damian as a new version of the angry young man, it is nice to see him sit and get a little sentimental over a cup of ox-blood soup, just like his mama used to make. Unfortunately, his sentimental state of being doesn’t last long, as he realizes his friends who own the restaurant are victims of a protection racket, or so it seems at first. As he discovers the true nature of the situation, he will encounter an old Batman villain and possibly start down a path he cannot return from.

In the second of three tales, “What’s Beef?”, we find Red Arrow in Seattle battling her own mommy issues as she is literally battling her mother, the assassin known as Shado. Emiko tracks down her mother as she prepares to take down her next target, and surprisingly, the two share a true moment of family. Guess how long it lasts. As with the previous story, Emiko’s narration adds to the sense of drama, and you get some insight into the way she works.

The third tale, “Going Back to Cali”, we are given a story set before the events of Flash War, as Kid Flash tries to take a little R&R on California’s beautiful beaches, only to be interrupted by Harley Quinn and El Diablo of the Suicide Squad as they are in the process of capturing a fugitive, all legal and above board. The other one-time kid Flash even swoops in and saves his younger cousin and a bunch of bystanders, but ultimately tells the younger Kid Flash the Suicide Squad is just part of the deal, a “gray” area they have to suffer to get the job done. By the end of the story, Wallace decides playing by the adult’s rules is not worth it.

Finally, we get an “Epilogue” where Damian decides the rules no longer work as written, and it is time for a change. He will form a team who is not beholden to the old ways, and will re-write the rules of the “hero” game.

Writer Adam Glass (Suicide Squad, Rough Riders) brings a large dose of his screenwriting experience to this comic. He writes a trio of very cinematic stories which all share common threads of family, rules, and change. We have seen instances in the past where the Teen Titans have tried to break free from the mold of “Junior Justice League”, and it usually succeeds or fails due to the team gathered as much as the creators on the job. In the past, it’s felt the line-up would have too many connections (in-universe and in real-world marketing) to take them very far in a dark direction, but this possible team doesn’t feel like that. Damian, Kid Flash, and Red Arrow are technically new enough to the DCU and removed enough from their legacy progenitors you feel this time it may click. If any of the core members of the previous teams had been introduced or thought of forming a team for these reasons, you know that by the twelfth issue it would be changed due to them realizing maybe violence with violence wasn’t really the way. Maybe not with this incarnation. I’m not saying that it will stick, but it seems like this team is much more likely to be willing to buck the system they see as failing. Glass does a good job in this setup, and it feels like it could be an important book to pick up.

The pencils by Robson Rocha (Demon Knights, Birds of Prey: Futures End) and inks of Daniel Henriques (Justice League, Supergirl) are deceptive. There has been almost a house style of art at DC in regards to particular “big” series and at first glance, this issue seems to fall in with that style. But if you take a second look, there are subtle differences which make it unique. I think this is most readily visible in the Red Arrow story. There is just something that differentiates it from a lot of the other DC art out there, and while it is subtle, it is nice. Add the great colors by Sunny Gho (Aquaman, Superman) and this issue pops nicely.

BOTTOM LINE: A “NEW” DIRECTION, BUT WILL IT TAKE?

Honestly, I was not very interested in this title when I first saw it. Teen Titans have been relaunched so many times with so many familiar faces it seems to be a rotating door. This one seems a little different, feels a little different. Maybe it is the current events in the real world influencing this different feel, maybe it’s the hinting at a darker direction, I’m really not sure. I’m not a fan of Damian either. He tends to be portrayed as the spoilt child who constantly rebels and is sure he knows better than his elders. Here he is portrayed a little different, we get a seemingly world-weary Robin who tried to follow the rules, but finally was shown they just didn’t work. It might be nice to see him a little less “barely restrained killer” and a little more willing to take that final step for the right reasons. Here we have two possibly core members, Robin and Red Arrow, born of killers, and another in Kid Flash, born of tragedy. Yes, it’s not the first time these dynamics have been brought together, but there seems to be a greater willingness to follow their own conscience this time around, and less kowtowing to the grown-ups.

If nothing else, I look forward to the inevitable conflict and possible reproductions from Damian’s actions this issue.

Teen Titans Special #1 from DC Comics brings the younger heroes into the limelight, it will be interesting to see if they can stand it. I’m willing to stick around and find out.

With a new team on the way, led by Damian, these Teen Titans are not going to slap the villains on the wrists. Can the younger generation handle the heat?