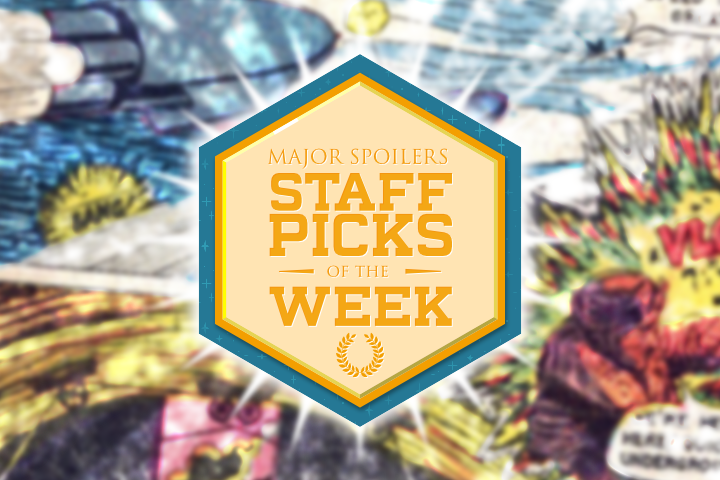 MATTHEW: Though I’m sad about the end of the monthly issues, I’m really looking forward to the new Astro City age and the end of the latest chapter of Michael Tenicek’s story.

RODRIGO: I mean, it’s the last issue of Astro City. Gotta pick it up.

STEPHEN: LOVE, LOVE, LOVE this entire series. Seriously, if you haven’t read Astro City books, then A) you now have a “closed” story, and B) you have a ton of trades to wade through. Get to it. Also, pick up this issue for that fantastic cover. BEANWORLD OMNIBUS TP VOL 01
Writer: Larry Marder
Artist: Larry Marder
Publisher: Dark Horse Comics
Cover Price: $24.99
SOLICITATION: The iconic inhabitants of Larry Marder’s unique Beanworld universe are introduced in this complete collection of the Beanworld comic-book run! Join Mr. Spook, Professor Garbanzo, Beanish, and many others as they experience adventures in their world that prove, whether friends or adversaries, they are all ultimately dependent on each other for survival. Marder’s deceptively simple artwork illustrates a self-contained ecological fantasy realm with its own unique rules, truths, and lingo.

MATTHEW: Buy this book. You will not regret it, it’s a tour-de-force of comic book art and storytelling and should be a part of everyone’s comic library.

RODRIGO: Beanworld is one of those rare works that I can point at and say “This is important” and “This has actually influenced my work.” and “Beanish! What are you doing!?” BEDTIME GAMES #1
Writer: Nick Keller
Artist: Conor Nolan
Publisher: Dark Horse Comics
Cover Price: $3.99
SOLICITATION: As summer comes to an end, three friends start senior year with a bang by exploring the mysterious past of their school. But before the night is over, their adventure turns into trouble when the kids set loose an evil that seeks to prey on their worst nightmares. BLACK PANTHER #2
Writer: Ta-Nehisi Coates
Artist: Daniel Acuna
Publisher: Marvel Comics
Cover Price: $3.99
SOLICITATION: MANY THOUSANDS GONE PART 2 FROM TA-NEHISI COATES & DANIEL ACUNA! T’Challa is a stranger in a strange land. With no memory of his past, there is only the suffering of the present – in the Vibranium mines of an unfamiliar empire. But all hope is not lost. A rebellion is growing–and they have a plan. But who will lead these lost citizens? Where is the Black Panther?

INGRID: This story is darkly allegorical, and I am intensely interested in finding out what happens next. CHARLIE’S ANGELS #1
Writer: John Layman
Artist: Joe Eisma
Publisher: Dynamite Entertainment
Cover Price: $3.99
SOLICITATION: The Angels are back, baby! -The original Angels, Jill, Kelly and Sabrina! Travel back to the swingin’ 70s, and revisit the butt-kicking, crime-fighting, mold-breaking lady detectives who took 70s TV by storm, ready to do the same to comics 40 years later! Break out your bell-bottoms, feather your hair, and jump back to a era of peanut-farmer presidents, gargantuan gas-guzzlers and foxy female detectives… for a globe-trotting adventure that’s simply too big and epic for the 70s-era boob tube. Written by elderly Eisner winner and solicitation-writing former-superstar John Layman, and with art by his scrappy but lovable youngster pal, Joe Eisma. This is one comic you DON’T DARE TO MISS!!!!

STACY: The fact they set this new comic in the continuity of the original 70’s television series is a gutsy move, and it’s got monkeys!

ROBOT OVERLORD: Make sure you read our review of the issue here. HARBINGER WARS 2 #2
Writer: Matt Kindt
Artist: Tomas Giorello
Publisher: Valiant Entertainment
Cover Price: $3.99
SOLICITATION: From East to West, the nation has been cleaved down the middle as Livewire’s defensive attack on the U.S. power grid envelops America in darkness and sets the stage for the biggest clash of powers ever witnessed… On one side, Peter Stanchek’s ragtag team of Renegades – alongside their newly activated army of untrained and wildly unstable psiots – ready themselves for an unsparing firefight with H.A.R.D. Corps and the agents of Omen. On the other, Ninjak and Bloodshot prepare to enter Livewire’s domain inside blacked-out Los Angeles. But as the casualties pile up and the losses mount on both sides, none of them will be ready to confront the full fury of raw power personified as X-O Manowar makes his long-awaited return after a year of self imposed exile among the stars…and delivers a single concussive strike that will send shockwaves across the whole of the Valiant Universe!

STACY: An exciting story that continues to gather steam. I love how high the stakes are and can’t wait for the next installment. LUMBERJANES #51
Writers: Shannon Watters & Kat Leyh
Artist: Dozerdraws
Publisher: BOOM! Studios
Cover Price: $3.99
SOLICITATION: Deep into their spelunking mission, April, Mal and Ripley are fighting to find their way topside, and back to the safety of the mess hall before anyone realizes they’re missing. Meanwhile, the others’ game of Penterra is getting a bit high stakes, particularly since they’re playing against an ultra-competitive goddess!

INGRID: I love this series. It can be wild and wacky, but it has a lot of heart. And this current arc – giant bugs. INGRID: This is a modern take on the classic British TV show, and has some of the same eerie feeling. There is such a delightful tension in not knowing who you can trust. SCOOBY-DOO TEAM-UP #39
Writer: Sholly Fisch
Artist: Dario Brizuela
Publisher: DC Comics
Cover Price: $2.99
SOLICITATION: To stop a spectral menace in the 21st century, the gang will have to travel back through time to solve the mystery before it even begins. But that’s easier said than done, as visiting World War II means facing spies, saboteurs and Nazi monsters! Good thing the gang isn’t alone, fighting side by side with the Golden Age’s premiere superhero team: the Justice Society of America!

STACY: So, not only do I get the Mystery Inc. gang, but I get the Justice Society of America, and the original Red Tornado? I’m sold! TEEN TITANS SPECIAL #1
Writer: Adam Glass
Artist: Various
Publisher: DC Comics
Cover Price: $4.99
SOLICITATION: Robin, Kid Flash and Red Arrow are sick of the super-hero status quo, and if the adults won’t do anything about it, you’d better believe these teenagers will! Following the shocking events of NO JUSTICE, don’t miss this special oversized issue that sets the stage for a fearless new direction that will change the Teen Titans forever!

STACY: This set-up to a new Teen Titans series has a more rebellious feel than previous incarnations. I’m excited to see more of it. MATTHEW: I’ve said it over and over again: If you’re not reading this one, you’re missing out.