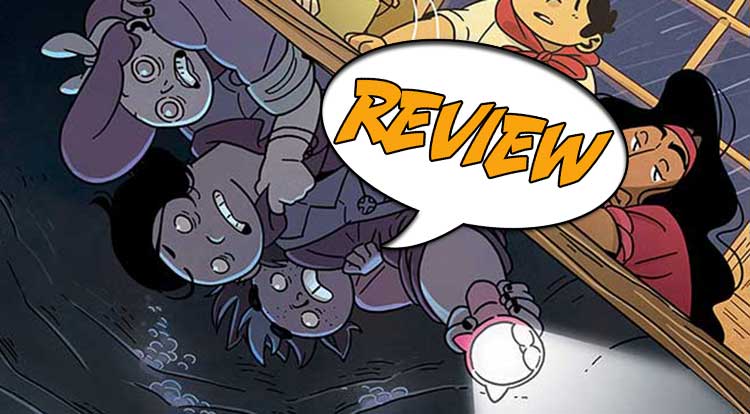 The Penterra playtest is about to get a lot more…interesting, and there may be more weird things under camp than just the giant millipedes. Isn’t this how you remember summer camp? Take the jump for our review of Lumberjanes #51 from BOOM! Studios. Previously in Lumberjanes: It can’t always be warm and sunny when you’re at camp. It’s a rainy day, and the Lumberjanes are all crammed in the Mess Hall (after the unfortunate glitter incident that made the Arts and Crafts Barn unusable). Several of our cast are playtesting a game that has more twists and turns than a sidewinder rattlesnake, while Mal, April, and Ripley explore the caverns beneath the camp.

I love Lumberjanes in general, and Lumberjanes #51 is no exception. This arc started out with less of a bang than some, but this is the third issue in and things are picking up. April, Mal, and Ripley, who had just been on a mission to sneak some snacks, have found themselves lost in the caverns that stretch beneath camp. We start out with Ripley enthusing about her favorite prehistoric giant bugs. A cool thing about Lumberjanes is that when Ripley names one of these bugs, such as Arthropleura, you can go look it up. It exists. (Or existed, thank goodness. While I don’t mind bugs in general, a nearly 8’ long millipede is a lot of bug.) Then they figure out what makes the glowing…stuff they’ve found change color. Ripley also finds a tunnel leading decidedly upward.

Meanwhile, back at the game of Penterra, which appears to be a wildly complicated one involving resources, trading, building things, cards, and special actions, Emily introduces hats and role-playing. Diane is part of the group and appears not to be as much of a rules nerd as some of the others (Barney, Hester, Molly, and Jo). Instead of getting a creatively named territory, she gets “Purple Town.” Instead of a cool hat, she gets a purple folded paper hat. But she carries on, and when Jo asks her to stall for time (to try to stop Hester from winning), she finds a way to do just that.

Underground, the girls find heaps of bones, but also a way out. However, they would have to go outside through the rain to get to the Mess Hall, and as Ripley points out, they promised Jen not to do that. They have to find another way. At the gaming table, Molly observes that everyone is enjoying the game in their own way (she has been knitting the whole time). This inspires Diane, who uses her powers to make things interesting.

As we frequently see in Lumberjanes, there is also some character development along the way. It seems that there are often new little things we can discover about these young people. And I really appreciate the way the writers don’t talk down to their audience. (How often can you read a book where you want to Google something from practically every issue?) This is a smart series that shows there are different ways of being smart.

STRONG SENSE OF CHARACTER AND PLACE

As always, the art in Lumberjanes #51 is expressive and free-flowing. (It wasn’t to my taste at first, but it has grown on me.) While different artists have somewhat different takes on the characters, they are always recognizable. I particularly like the range of facial expressions in play in this issue. We run the gamut. Even the giant bug is expressive.

Despite the minimalistic backgrounds, there is a strong sense of place, and of the characters in relation to each other, both in the underground scenes, where there is a lot of movement, and in the game, which has a lot of back and forth. I’d also like to take some time to mention the lettering – we have animated conversations going on amongst these young people, and the lettering emphasizes this so well it is a treat.

BOTTOM LINE: FRIENDSHIP TO THE MAX

Lumberjanes #51 does a great job of depicting adolescent friendship. These young people have rivalries, get into arguments, ignore each other in their enthusiasm for something else, but when it comes right down to it, they have each other’s backs. In this issue, we also have a thread of breaking (or at least bending) the rules, pushing rules to the limit, but also of trying to follow the rules. This is a joyful book that I recommend to anyone, but would especially recommend for any young ladies in your life (sisters, nieces, daughters, etc.) who might be interested in comics.

Delightful hard-core lady-types having yet more unexpected adventures at camp.