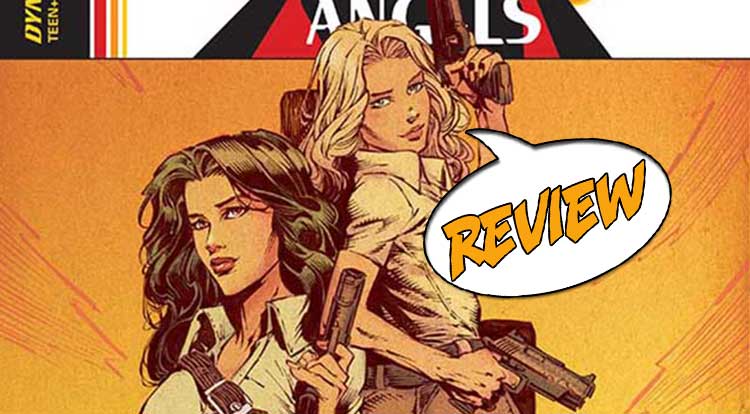 Once upon a time, there were three little girls who had a television series in the 1970s. Yes, Sabrina, Jill, and Kelly are back in action! Put on your best turtleneck and fire up the disco ball, because Charlie has a case in this week’s Charlie’s Angels #1 from Dynamite Entertainment. Previously in Charlie’s Angels: There were three little girls who went to the police academy and were assigned very hazardous duties. But a fellow named Charlie took them away from all that, and they are now detectives in their own right. This story, “The Devil You Know,” features the first season characters in the first of a 5-part adventure set in the ‘70’s.

SHUFFLE THROUGH THE SHAG CARPETING TO TURN ON YOUR TV

I’ll say it right out – Charlie’s Angels #1 is a fun book. The creative team has got all the story beats down, and boy does this take me back.  (I confess, I may have seen an episode or two of this show at some point.) We open with an introduction to our heroines in their roles for their current case:  Jill is a hostess; Kelly is a waitress, and Sabrina is a magician. Then we back out to set the scene around them. We’re at the Limbo Lounge in LA. The burly Saldino is there to meet a Mr. Campos, and Jill takes him to his table. This meeting is for a gun deal, interrupted by Kelly, asking for their drink order. Then it’s further interrupted by the stage show featuring, you’ve probably figured it out, “The Astonishing Sabrina!” who pulls not a rabbit, but a monkey out of her hat. This goes about as well as you might expect. Readers, I was in. This feels like the opening of the show – start in with the action, cut to credits, and then get filled in on just what is going on.

And cut to the credits we do. A nice double splash takes us through the TV intro and to the Angels’ office where Bosley is introducing them to their next case. Ted Gardner, the owner of the Limbo Lounge (also a ventriloquist – an important plot point and very ‘70’s to boot) fell into debt and had to take a partner, Victor Campos, who has connections to organized crime. Then we cut back to the monkey business at the club, without our ever really finding out what Ted wanted, but that’s okay. We have chaos, spilled drinks, a liberated toupee, and broken glass. Amongst all this is also a pair of Germans in sunglasses and white suits, with flutes of champagne, observing. Their first dialogue is brilliant – the man comments that the Angels are incompetent and little more than eye candy. The woman points out how, in all the chaos, Jill placed a bug at the table, and Kelly planted a tracker on Saldino. This is surely a nod to how the show was perceived at the time. It may have been “jiggle TV,” but the Angels were early female action heroes and hardly damsels in distress.

So, the Angels get a recording of the gun deal, and all is good until they see Campos dragging Ted, against his will, out of the Limbo Lounge to the arranged meeting with Saldino. The Angels (and Bosley) follow, and Sabrina comes up with a plan. As the money changes hands, Jill shoots the handle of the briefcase (because ‘70’s TV shows like this were not bloody or overly violent). Kelly walks in and calls Saldino out as an undercover detective (which of course he isn’t, but he is wearing a tracker…) The bad guys all shoot each other, Kelly kicks them around a little, and Ted falls for Kelly. We even end with a joke involving the monkey.

But wait, it isn’t quite the end! Remember those two Germans? As Ted is walking home with Kelly’s phone number (no cell phones in this decade!), the Germans confront him, knock him out, and reveal their plan – to get the Angels under their control, and then kill President Carter.

TOTALLY ‘70s IN STYLE AND TONE

Charlie’s Angels #1 embraces what it is right from the get-go. The creative team is listed not only with their names, but little parenthetical titles, i.e., “The Flirty Angel” or “The Tough Angel.” To me, the faces are not that much like those of the actresses from the show, but that’s fine. We still have a blonde and two brunettes, and the hairstyles look right. We have a Bosley who is the right type, so we can identify him readily, and Charlie – well, we see the back of his head. But look at the fashions in this book. Little details help make the setting, and we have those aplenty. Big lapels and belt buckles, Afros, boots, turtlenecks, sideburns, loud shirts, platform shoes, clingy dresses, and leisure suits are all depicted. Oh, and I must not forget the bell-bottomed pants. The backgrounds are fairly simple, but the details in them do fit in with the time period.

The creative team has really captured the flavor of the show as well. The opening scene, and the whole plan involving the monkey, seems as convoluted as any we would have seen back then. Ted falling in love and getting Kelly’s phone number is sweet and utterly appropriate for the time. I love the use of the classic logo and the bright colors. It takes a team effort to pull this off, and they do. And those German villains are heckin’ stylish and up to no good and I want to find out more about them.

BOTTOM LINE:  A TREAT FOR FANS

For fans of Charlie’s Angels, this is a fun read and a definite nostalgia kick. If you don’t know the property or know the time period, this is a chance to get a taste. The Angels fight, but it’s not all about the fighting. Some of their strategies seem a bit contrived, and there is some light-heartedness – this is not a noir detective tale. The Angels are pretty and stylish, sexy but not lewd. With the funny scene at the conclusion, you can practically hear the laugh track. But that’s the way things were back then.

The original Charlie’s Angels in the 1970s – need I say more?