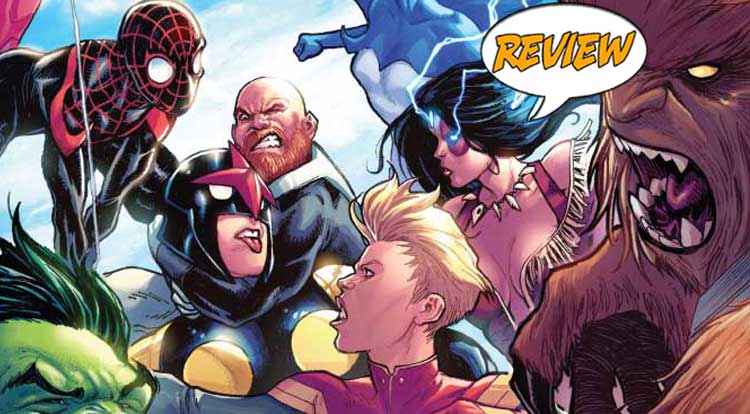 Our young heroes have reluctantly chosen to trust the Master of the World, whose name really says what you need to know about his trustworthiness.  And now, Alpha Flight would like to have a discussion with them. Your Major Spoilers review of Champions #21 awaits! Previously in Champions: While investigating some strange ice-level readings in the Arctic, the Champions and their new recruits discovered a facility run by the villainous Master of the World.  But Rather than hatching a nefarious scheme, the Master seems to be repairing the ice caps in order to save a world he intends to rule someday in the future.  The Champions reluctantly agree to let him proceed, but the locals aren’t happy about it, and neither is Alpha Flight!

As our issue opens, things are very tense, as the Champions aren’t interested in having their elders explain that The Master is a jerk, even if he’s doing something good.  As for Alpha Flight, they are certain that the young Champions don’t fully understand the situation.  It’s a volatile combination that leads to the ol’ “misunderstanding-turns-to-fight” routine when Talisman (who finally has a costume that doesn’t leave her exposed from clavicle to pubic bone) tries to magic the Champions to sleep.  While his pals fight with the premier super-team of the Great White North, Spider-Man sneaks inside to find that The Master’s machinery is powered by… a human being!  Specifically, but a young Inuit woman named Amka, who has been empowered by Sila, the Soul of the North, one of the mystical Guardians of the area. The girl suddenly explodes into action, transforming into a mystical monstrosity and forcing a truce between the teams in order to deal with her threat.  With his duplicity revealed, The Master decides that world doesn’t deserve his genius, and detonates his scaffolds, leaving the heroes to clean up the mess, while Amka decides to use her new mystical powers as a member of The Champions.

A CONVERSATION THAT NEEDED HAVING

Champions #21 features (FINALLY!) a conversation between Captain Marvel and Ms. Marvel that starts to rebuild the trust between the heroes after the mess that was Civil War II, including an agreement to trust and not blinding wander into a fight should this happen again.  It’s a nice moment, and one that’s long overdue.  Alpha Flight doesn’t get a lot of panel time in these pages, but Sasquatch and Puck have some nice character interactions in action, including a Sasquatch/Wasp team-up that reminds me of the trailers for ‘Ant-Man and The Wasp.’  The art is clear and expressive throughout the issue, and I really like the facial expressions Izaakse creates.  (I even like Spider-Man’s mask having facial expressions, since there’s an explanation for Miles having squinty eyes on his costume, unlike Peter Parker’s).  The final page splash of Amka in action is pretty lovely, as are the renditions of her shapeshifting powers and use of the Aurora Borealis as a power signature.  My one complaint is that her name and powers are very reminiscent of Alpha Flight’s Snowbird, though Snowbird’s appearance in this issue implies that the creative team is aware that they’re on that familiar turf.

There are a lot of Champions members, so not getting a lot of Viv Vision or Nova in these pages doesn’t completely damage my enjoyment, but it does make me a little wary of adding even more members to the group.  Still, Champions #21 looks really good thanks to expressive, dynamic art and gives us a new, very personal take on the classic generational conflict thanks to Carol and Kamala, earning a better-than-average 3.5 out of 5 stars overall.  The obvious care put into making sure that Snowguard’s background and origin is respectfully handled makes this more than just another hero vs. hero battle, and I look forward to seeing where The Champions go from here.

A nice twist on the "Youth Vs. Experience" argument, with bad decisions on both sides, leading to the debut of a new Champion.