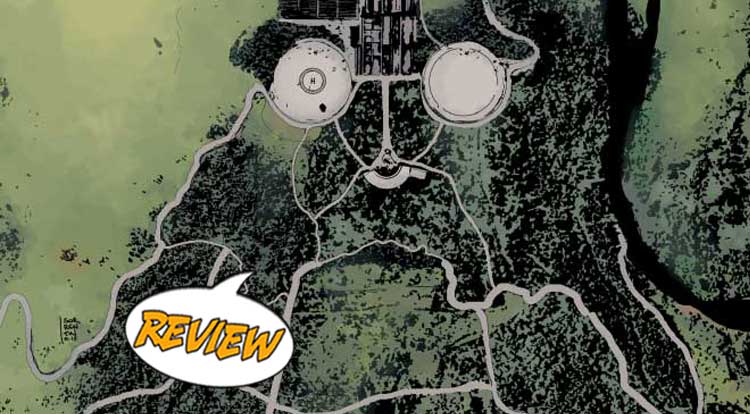 It’s right there…  It’s always BEEN there, if you know where to look.  But what IS The Black Barn?  Your Major Spoilers review of Gideon Falls #4 awaits! Previously in Gideon Falls: Coming to Gideon Falls after their previous priest was accused of murder, Father Fred has walked right into the middle of a strange mystery.  A man named Norton has been collecting strange shards of wood and metal, reputedly from a mystical structure known as The Black Barn which may or may not actually exist.  The sheriff maintains that none of it is true, but Father Fred has discovered Father Tom’s notes, which purport that there’s much more to the mystery than just a legend of a ghost barn…

A MYSTERY IN THE FIELDS

After the death of his predecessor, Father Tom, Father Fred has encountered Doctor Sutton, who has a tale to tell.  He explains that he is one of The Ploughmen, a secret society that has grown up around the strange events and the legend of The Black Barn.  Fred disdains his “science fiction” stories, but Doctor Sutton implores him to think about the nature of belief and of faith.  Father Fred sets off to find the sheriff of Gideon Falls, and we cut to Doctor Xu, who (in a really visually stunning sequence) hallucinates her patient, Norton, and The Black Barn itself, sending her out into the rain to find him, his delusion now having become hers.  As for Father Fred, his meeting with the sheriff goes badly, especially when he tells her that one of her deputies is part of the Ploughmen conspiracy.  An emergency call sends them both out (she is a little too tipsy to drive, so he takes her in her cruiser) to find Ballard…  and a brutal murder.

Once again, this issue forces me to think about the nature of a mystery story.  There are times when you are completely in the dark about what is happening, and it is infuriating.  This story delicately balances the lack of real information with richly drawn characters, each of whom tells us what’s happening from their perspective, leaving open the possibility that they’re wrong.  Sorrentino’s art is once again lovely, using unusual layouts (one page features a cross-shaped center panel, with an array of images around it, all bounded in blood red) to great advantage.  I literally read the double-page spread of Dr. Xu’s vision four times, each time getting something different out of the art.  There’s also a beautiful shot of Norton and Xu in the rain where it feels like the very linework itself is melting in the cold rain that douses them.  Stephen had, in our review of #1, complained that some of the panels felt like processed photographs, but A: I’m not sure that is true, and B: It’s a lovely effect regardless.

BOTTOM LINE: WORTH PORING OVER THREE OR FOUR TIMES

This issue sheds little light on the truth of The Black Barn or Father Tom’s actions, but by introducing Doctor Sutton’s possibly fruitless conspiracy theories, it adds complexity and depth to an already complex story.  Gideon Falls #4 makes for a deep read, diving into a Stephen King-like dissection of the strange secrets hidden beneath the veneer of a small town and doing so with really beautiful, artistic layouts, earning 4 out of 5 stars overall.  Four issues in, we’re still moving slowly, but it’s intentionally slow pacing and it works for the story being told.

Unique layouts, a compelling arcane mystery and some well-realized characters make for an engaging read...