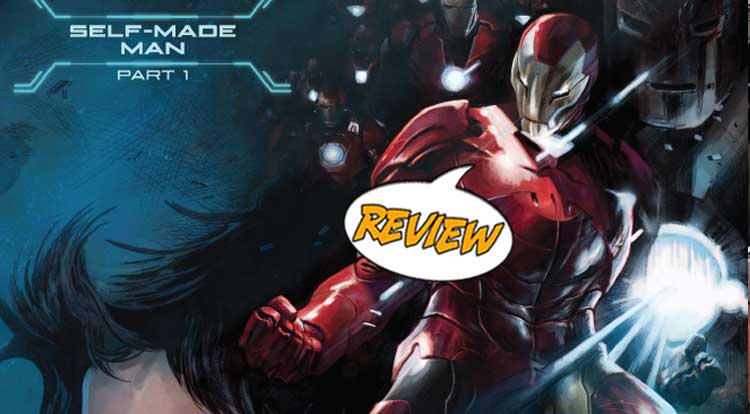 It is said that Iron Man, all jets ablaze, will fight and smite with repulsor rays.  But what about the cool exec with the heart of steel inside all that metal?  Your Major Spoilers review of Tony Stark: Iron Man #1 awaits! Previously in Tony Stark: Iron Man: After being rendered comatose and nearly killed during Civil War II, Tony Stark has been missing from the Marvel Universe for some time, with Doctor Doom and Ironheart trying to make up for his absence.  Now, the man is back with a brand-new body and some brand-new ideas, as well as a whole new outlook on his Iron-life.

STARTS WITH A BANG

This issue opens with a flashback to twenty-five years ago, as a young roboticist named Andy Bhang prepares to show off his designs at the “International Robot Soccer Championship.”  (This is actually a thing, believe it or not, though I believe the real-world example is called RoboCup.)  Andy’s meticulous work is immediately shown up by ten-year-old Tony Stark, whose stable of robots are far beyond his own, and also choreographed to ‘Get Ready For This.’  Little show-off…  Cut to the present day, as Andy tries to complete his work on a new robotic system he calls IBS, only to have Tony Stark arrive, tell him that he’s bought Andy’s whole company, and that, also, that name has to go.  Apparently, Andy’s work is the key to a whole new era for Stark Solutions, focusing on teamwork over the individual, and even Tony agrees that this is not his strong suit.  Before Bhang can even get used to the flying cars, talking animals and working for an actual A.I. (former Avenger Jocasta, now a full Stark Solutions employee), a 3F crisis event pops up, forcing Iron Man into immediate superhero action.

The desperation is justified, as the 3F’s stand for ‘Fin Fang Foom.’

This issue starts off with the proverbial bang, and never really slows down as the reader gets to follow poor befuddled Andy getting used to his new job and surroundings.  A number of old Iron Man friends return (in addition to Jocasta, we see Bethany Cabe back in her security chief role and James Rhodes, whom I thought was dead, also plays a part) and even with crazy ideas bursting out of every seam, this issue quietly returns Tony Stark to a status quo that resembles his Bronze Age self.  Dan Slott’s run on Spider-Man was often described as ‘Peter Parker being Tony Stark’, so it’s nice to see him really turn up the wild and crazy futurist angle in these pages, giving Tony a flying car and introducing a giant Foom-Buster Iron Man suit.  The breakneck pace is also key to his characterization of Iron Man, showing us a Tony Stark whose mind is always racing, never stopping to breathe, and paired with Schiti’s art, it really comes together.  The technical bits and gizmos are often the point of Iron Man, and Schiti is up to the task.  The first sight of Tony’s new Iron Man lab is a wide-screen, breathtaking moment, and I really appreciate how even Jocasta has subtle and nuanced facial expressions.  (She also spends part of the issue in a smart business suit, which is a visual worth the price of admission for me.)  Perhaps the biggest clue about Dan Slott’s traditional-turned-up-to-eleven take on Tony Stark: Iron Man #1?  Tony is wearing his old-school sixties mustache rather than the full goatee seen in recent years.

There are a lot of things to be introduced in this first issue, and the use of Andy Bhang as the “new guy” getting the tour of the facilities is a great way to do it, but there are hints of plots to come (Bethany warns that certain schematics have gone missing, Fin Fang Foom is revealed to be not entirely acting of his own volition and more) for those who pay attention.  Tony Stark: Iron Man #1 seems to know that first issues can be overwhelming, and steers into the skid by giving us a plot-based reason for that as well some lovely character work to remind us about Tony and his supporting cast, some ingenious new Iron Man suits and very strong art and coloring, earning a better than average 4 out of 5 stars overall.  It’s a good reintroduction to the man inside the metal, and makes me excited about the new/old take on the Armored Avenger.

Wild ideas, fast pacing and a whirlwind of changes actually camoflages a return to old-school Iron Man, and it all comes together with style...