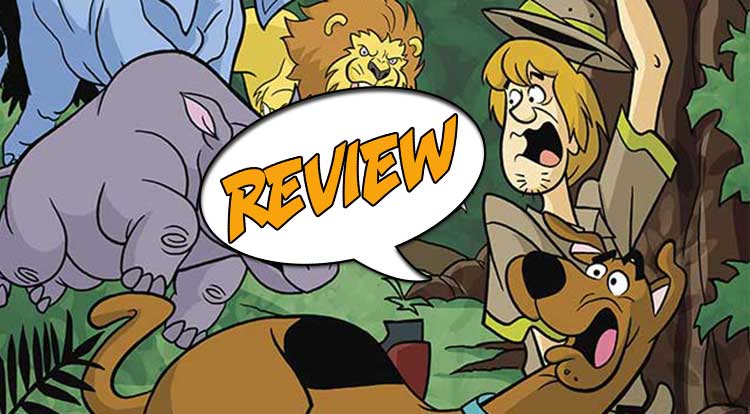 Scooby-Doo! Where Are You? #93 Review

The groovy van, the cool dog, the orange/red ascots, it’s the teenage mystery solvers you grew up with as you’ve always known them. This month, Scooby-Doo and the gang solve mysteries in the jungle and the ghost of love lost in Scooby-Doo! Where Are You? #93 from DC Comics! Previously in Scooby-Doo! Where Are You?: There are versions of Scooby-Doo out there for everyone, from awesome team-ups to wrestling themed adventures, even a more mature zombie fighter version of the gang, but it’s nice to be able to pick up a comic where Scooby and the gang are still just meddling kids!

The format for many licensed comic books is simple; if we are not directly tying into the current series of events, we are enjoying a series of short, unrelated adventures. Here, in issue #93, we get two great adventures for the price of one.

First up, we have “Safari, So Goodi”, which finds Mystery, Inc. enjoying an African Safari when they are accosted by The Spirit of the Land! The second adventure, “The Weeping Bride of Lover’s Leap”, deals with the ghost of a jilted bride and her haunting of the place she supposedly leapt to her tragic end.

Both of these stories are great fun and quick reads. The writers of each story follow the traditional Scooby-Doo formula to a tee, and they…

What? You don’t know the Scooby-Doo formula?

Well, here’s how it works. The kids of Mystery Inc. are either on their way to some location, enjoying some activity, or have been summoned when they are attacked by what seems to be a supernatural presence. The team investigates, finds out a legend or myth regarding the haunt, and along the way meets various possible suspects. Then, the kids concoct a way too complicated trap to… well, trap, the specter. Scooby and Shaggy are the bait, they mess up the trap, but they capture the spook anyway, usually landing on them. The gang then gather the police or other authorities and explain how the supernatural effects were done, then they unmask the ghoul. Often, but not always, the villains last words are, “And I would have gotten away with it too, if it hadn’t been for those meddling kids!” Que laughter, fade to black. In one form or another, this has been a viable format for the franchise since September 13th, 1969!

YOU AND SHAGGY GO THAT WAY…

In the first story, writer Sholly Fisch (Teen Titans Go!, Action Comics) proves once again that he is a pro at these stories, having done many great “kids” comic tales. He takes a simple premise, puts the kids in it, and within ten pages you get a great little tale that touches on an important issue. His work is always a joy to read.  Likewise with Scott Jeralds (Scooby-Doo! Scooby-Doo, Where Are You?), whose art is always solid. Just a side note, Jeralds is also a producer and director, and produced shows like Krypto the Superdog and Static Shock!

The second story has a little more to it and feels more like an episode of the classic television series. Joe Edkin (Sonic X, Quicksilver) opens with our readers finding Scooby and Shaggy already deep within their role as bait for the ghost trap. We flashback and get the whole story, and within ten pages, we have a tale of love lost and love found. Eric Doescher really captures the feel of old-school Scooby-Doo, and his design for the ghost is great.

BOTTOM LINE: BUT WOULD YOU DO IT FOR A SCOOBY SNACK?

The fact that you can still pick up Scooby-Doo comics, is multiple series, in this day and age is great. I grew up loving Scooby-Doo, my kids love Scooby-Doo, and it really is one of those pieces of childhood that is a joy to revisit. If you have kids, or just love you some Scooby-Doobie-Doo, these are great books.

That said, you might want to be made aware of a few things. The first story, “Safari, So Goodi!” is a quick adaptation of the eight episode of the What’s New, Scooby-Doo? cartoon series from 2002. It doesn’t resemble it much, but you might get a feel regarding the underlying theme. However, if you collect Scooby-Doo comics, double check to make sure you don’t already have Scooby-Doo! issue #35 from 2000, this series was printed with the Cartoon Network banner. “The Weeping Bride of Lover’s Leap” originally appeared in that book, but it in no way diminishes the enjoyment of it for this go around.

If you like Scooby-Doo, or have young children, it would be a real mystery as to why you wouldn’t pick up Scooby-Doo! Where Are You? #93.

A continuation of a great franchise, fun and fast, just the thing you need to break up the monotony of your day.