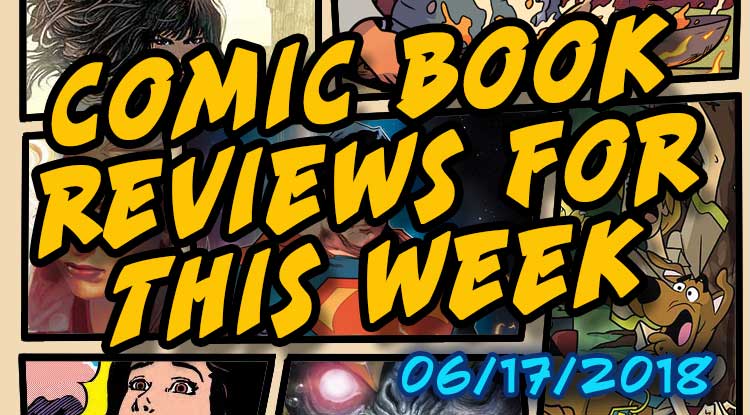 Welcome to the weekly rundown of comic book review from Major Spoilers. There is a lot of stuff on the site, but this is certainly the place to find all of the reviews we’ve written this week (and a bit more). Fathom #1 – The seventh volume starts with a cool new artist and an interesting new status quo. I’ve never been a huge fan of Aspen Matthews adventures, but this first issue makes me want to read more… Also: I can NOT believe it has been twenty years! 3 out of 5 Stars – Matthew Peterson Robocop: Citizen Arrest #3 combines an almost avant-garde art job with some lovely coloring and a story that hides as much as it reveals, but it does make me want to hunt down the first two issues and get the complete story, earning 3 out of 5 stars overall. It’s not slavishly devoted to the tone or visual look of the source material, which I respect, but which serves both as an advantage and a slight flaw… – Matthew Peterson Black Hammer Age of Doom #3 finally starts to reveal the mysteries of what is going on in Jeff Lemire’s latest world. The big answer is coming, which could mean the end of one story and the start of another. It may take a bit to wrap your head around, but the world-building is fantastic. 4 out of 5 Stars – Stephen Schleicher This series has been promised as the culmination of comic book Buffy (but that doesn’t necessarily mean the end), and as such, the creators are pulling out all the stops, bringing out all the beloved characters and setting up a villain to top the previous big bads… and that’s okay. Even with the pacing being a little frenetic, Buffy The Vampire Slayer Season 12: The Reckoning #1 gets the job done with excellent art, strong Buffy-speak dialogue, a lot of familiar faces and a plot point that’s been fifteen years in the making, earning 4 out of 5 Stars. – Matthew Peterson If you haven’t read the first issue, you can probably jump in here and not get totally lost. The Ether is a strange place, full of magic, but not your stereotypical fantasy world. It is well worth reading Ether: The Copper Golems #2 for some of the twists it puts into the tropes we expect, and the interactions between smart, yet flawed, characters. 4.5 Stars out of 5. – Ingrid Lind-Jahn Listen to the review here

A lot of world-building, but it feels more like a #42 issue than a #2, and the sheer number of characters and situations makes this one hard to get into. That said, the art is good and the dialogue is top-notch throughout. – Matthew Peterson

The Mingolaverse continues to grow, and at every twist and turn, something creepy and mysterious is revealed. If you haven’t read the Witchfinder series, but love what Hellboy delivers, then you need to dive into everything related to Edward Grey. This issue brings in the mysticism and secret societies of the 1890s and makes we want more from Mike Mignola and Chris Roberson. – Stephen Schleicher Aquaman #37 is a tale of adventure, magic, betrayal, and duty that will amaze you. Make sure you hook a copy at your friendly local comic shop. 4 out of 5 Stars. – Stacy Baugher Justice League #2 is part of an epic story with a large cast. I think we’ve finally gotten through introducing most, if not all, of the players. There are more plotlines, but they have some threads tying them together. Unlocking the Seven Forces sounds like a typical epic plot, but even if it’s a MacGuffin, I am optimistic that it will set up interesting encounters in the issues to come. 4.5 out of 5 Stars. – Ingrid Lind-Jahn I challenge you to find a reason for New Challengers #2 from DC Comics not to find a way into your read pile. 3.5 out of 5 Stars. – Stacy Baugher If you collect Scooby-Doo comics, double check to make sure you don’t already have Scooby-Doo! issue #35 from 2000, this series was printed with the Cartoon Network banner. “The Weeping Bride of Lover’s Leap” originally appeared in that book, but it in no way diminishes the enjoyment of it for this go around.  If you like Scooby-Doo, or have young children, it would be a real mystery as to why you wouldn’t pick up Scooby-Doo! Where Are You? #93. 3.5 out of 5 Stars – Stacy Baugher Titans Special #1 is double the story pages for less than twice the price, featuring a lot of well-executed moments and storyline heavy lifting, with skilled art in every chapter (especially Beast Boy’s and Donna Troy’s), earning 3.5 out of 5 stars overall. DC’s new model of storytelling (putting all the setup in a giant-sized special issue before the first issue of the comic comes out) may not be perfect, but I enjoy how well this issue establishes who and what this latest Titans team is going to be about. – Matthew Peterson Leaving aside the age-old question of who the target audience is, this is a solid bit of comic storytelling, giving us a repentant former villain Xena faced with the consequences of her own previous villainy, a vengeance-maddened Callisto and a clever, resourceful Gabrielle who really turns the tide. Xena #5 even has a unique quasi-ancient font used for the lettering to enhance the book’s “time of ancient gods, warriors and kings” vibe, with some excellent art, earning a well-deserved 4 out of 5 stars overall knowing how the story went the first time, this one makes for a good read. – Matthew Peterson I found Niles’ reboot of his seminal 30 Days of Night series a limp retread that amounted to very little. In contrast, Delta 13 #2 is a bleak looking, tautly told story that ratchets up the tension from panel to panel. Sure, it’s using elements familiar to anyone within even a passing knowledge of cinematic horror-tinged science fiction, but when it’s this seductively good, what does that matter? This is a very strongly told issue that sets the rest of the series in motion. This is a series that is definitely one to watch. 3.5 out of 5 Stars. – Robert Mammone I really enjoyed Flavor #2. I like cooking, and I love a good story. Anant and Xoo are both likable characters, and Buster the dog is entertaining. So far, this is not a book that is heavy on the action, but the storytelling is a pleasure. 4 out of 5 Stars. – Ingrid Lind-Jahn There is much to admire in Infidel #4. The unflashy artwork carefully matches the tone that Pichetshote works hard to develop. The buildup to the cliffhanger never feels forced, and the horrific, when it comes, is a real gut punch, as it should be. The atmosphere is unsettling and tense, while the strong plotting leaves the reader wondering how Medina will escape. I can’t recommend this issue, and this series, enough. 4 out of 5 Stars. – Robert Mammone Shanghai Red #1 is a visceral, voilent, dark historical drama that still manages to have a good emotional core to it. I was thoroughly impressed with the art, but found it a little exposition heavy. It was a good, solid read, but not my cup of tea. 3.5 out of 5 Stars. – Rodrigo Lopez Tony Stark: Iron Man #1 seems to know that first issues can be overwhelming, and steers into the skid by giving us a plot-based reason for that as well some lovely character work to remind us about Tony and his supporting cast, some ingenious new Iron Man suits and very strong art and coloring, earning a better than average 4 out of 5 stars overall.  It’s a good reintroduction to the man inside the metal, and makes me excited about the new/old take on the Armored Avenger. – Matthew Peterson As a fan of both these characters, I feel like Marvel Rising: Alpha #1 is the perfect balance of fun story, energetic art and characters whom I really want to spend some time with, making for a lovely comic reading experience, all under a beautiful cover, earning 4.5 out of 5 stars overall. If you don’t already love these two heroes, this book might help you along. And if you do, it’s a nice team-up treat, combining old-school and modern storytelling elements in one 32-page package. – Matthew Peterson I was very young when these stories were originally published, but it is just the sort of thing that would have grabbed me. The science fiction does not seem to be dumbed down at all, and there is palatable effort to gear the stories from a more feminine angle. Few books outside of the teen comedy and funny animal books attempted to cater to younger girls. Even the vintage romance novels of the Silver Age and Bronze age where geared more toward an upper-teen set. 4 out of 5 stars – Stacy Baugher

Be sure to check Major Spoilers throughout the week as we review new comics from around the industry.