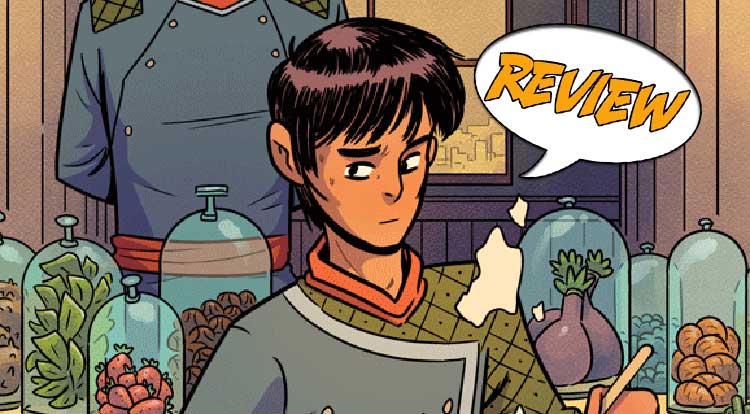 In a walled city where chefs are the ultimate celebrities, unlicensed chef Xoo Lim will do anything for some Garuda truffles, including fight! Check out this review of Flavor #2 from Image Comics. Previously in Flavor: Xoo Lim is an unlicensed, unregistered chef in a mysterious walled city called The Bowl. Her parents are ailing, and she needs Garuda truffles to help them. She also has to deal with Uncle Geof, who has joined the family as her caretaker. And apparently, the city-state’s guard are secretly sacrificing people to something unknown.

WHERE FOOD IS KING

One of the truly wonderful things about comics is that they can be used to tell so many different kinds of stories. Flavor #2 appears to be a coming of age story told in a setting where food and chefs are front and center, but it doesn’t lack for adventure. As this issue starts, we meet Anant, a young man and one of a handful of young Culinarians at the Academy. Anant is not an expert chef, and the masked instructor makes it clear he is probably on his way out. Anant is the son of Lord Kaur, an affectionate and doting father, so we don’t doubt Anant is thereby influence rather than talent.  Anant also has half of a torn childhood photo of Xoo and her dog Buster.

Speaking of Xoo Lim, she has the other half of the photo, showing a young boy, tacked to the wall of her shop, where she works as a chef. As she closes up for the day, she grudgingly thanks Uncle Geof and sends him on his way. Then, while discussing her plans with Buster (who talks back with “Ruff, ruff, ruff!” but plainly understands her and does not approve) she puts on an outrageous disguise. She is out to get Garuda truffles. (We did see a small dish of these at the Academy.)  Meanwhile, Geof stops off not in a bar, but in an ice cream shop (which is a fun little twist). He overhears a man bragging about his wife’s cooking, and how she could win a tourney against the Culinarian kids hands down. The talk of the prize money involved gets Geof’s attention, and he asks about this. The man feels he’s butting in and starts to fight him. Geof dodges his blows, his shirt gets torn off, and reveals a tattoo which marks him as someone important. Just who is “Uncle Geof” and what is he up to?

Xoo and Buster sneak into “Fishmongers” which is not just a place to buy fish. In the basement, there are more exotic ingredients, and in the sub-basement, there is some sort of ring for gladiatorial combat. Xoo has come, armed with a variety of knives, and is ready to fight. Now I was not expecting that.

A FASCINATING WORLD WITH AN EXTRA FROM THE CULINARY CONSULTANT

The art fits well with the story in Flavor #2. It is somewhat cartoon-like, with clean lines and some exaggerated facial expressions. But it is in the world-building that the art really excels. I’m seeing some Asian influences in the designs of some things, but there are also some features that look a little more Western. In crowd scenes, you get the idea that people in The Bowl have come from a spectrum of cultural backgrounds. The entire book has a flavor – if you will – all its own. As you might expect in a book about chefs, foods are prominent. Even the workingman’s ice cream shop shows men eating a variety of ice creams. But it really hits you that we are in a different world when we get to Fishmongers. The guy who welcomes Xoo is dressed something like a circus ringmaster, except that he is also wearing a balaclava-like mask of a fish head under his top hat. It is wild and distinctive.

And I wasn’t kidding about the culinary consultant. In addition to some discussion about crepes Suzettes within the story, there is also a one page article about flavor and how it works, drawing upon all the senses. (It is not often you see a comic with a homework assignment, but this is a kind of cool one.)

BOTTOM LINE: COME INTRIGUED AND GO AWAY HUNGRY FOR MORE

I really enjoyed Flavor #2. I like cooking, and I love a good story. Anant and Xoo are both likable characters, and Buster the dog is entertaining. So far, this is not a book that is heavy on the action, but the storytelling is a pleasure.

So far, this is not a book that is heavy on the action, but the storytelling is a pleasure.