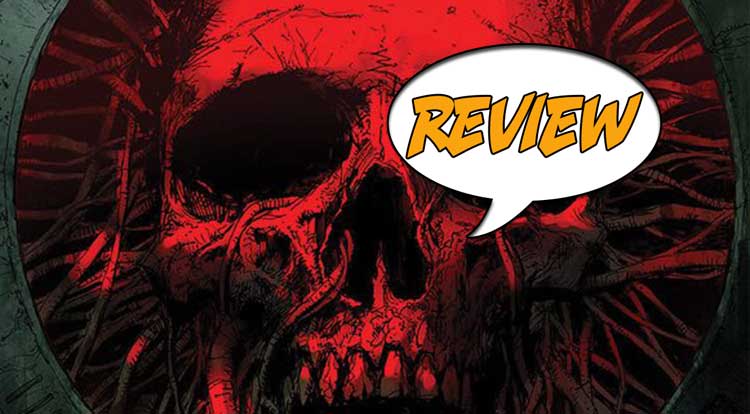 It’s impossible to avoid referencing it, so I’ll just come out with it.  In space, no one can hear you scream.  Now that I’ve got that out of my system, we rejoin the crew of an asteroid miner who have discovered something very, very odd about the chunk of rock they landed on in the previous issue.  Join our motley band in Delta 13 #2 as they discover some things are better left undisturbed. Previously in Delta 13: A crew of asteroid miners tasked with landing robotic crawlers across the asteroid belt to assist mapping it come across a huge asteroid that proves irresistible.  Landing, they discover a wall covered in alien writing.  Against the better judgment of Sanders, the only woman on board, the other members of the crew explore the asteroid’s strange depths.  What they find will upend their mission and put all their lives at risk.

Delta 13 #2 gives more than a few nods to its cinematic sources.  Indeed, it makes a full obeisance, in referencing Alien and Lifeforce.  But that’s cool.  The reason the trope retains its popularity is because the dark reaches of space are antithetical to human existence.  The environment, the vast distances, the psychology of isolation and the sheer alien nature of the aliens all conspire to create an atmosphere ripe for horror.  And writer Steve Niles taps all those tropes to excellent effect.

Crewmember Sanders is our Ripley-esque character, surrounded by men who won’t listen to reason as they give in to their curiosity and stumble deeper into the mysterious asteroid the encountered in issue 1.  Alien writing on a wall isn’t sufficient to give them pause before the plunge into the asteroid’s depths, improbably uncovering a naked woman connected by piping into the structure of the wall.  The men, against Sanders’ warnings, take the woman down and bring her into their ship.  Of course, as the woman awakes at the end of the issue, the promise of this build up is that it will no doubt end in tears for all concerned.

As soon as I saw Nat Jones’ artwork, I immediately got a strong Steve Dillon vibe.  His unflashy style and the near monochrome colouring accentuate the slowly ratcheting tension of Niles’ script.  Nothing flashy or momentous happens in Delta 13 #2 (unless you count finding a naked woman somehow alive in an airless environment momentous) but that doesn’t detract from the confident storytelling, which really connects with the isolated and hostile environment the crew finds themselves.

It’s also worth noting the cinematic quality of the artwork and layout, particularly in the first part of Delta 13 #2.  The searching men are shrouded in darkness, their helmet lamps the only point of illumination in a sea of black.  This serves to accentuate how alone and distant they are from safety, which increases the tension.  Looking at the art, you get a real sense of claustrophobia as the darkness presses closer as they burrow deeper into the heart of the asteroid.  Jones uses that darkness to great effect as it blurs the lines marking the panels, which lessens their artificiality and gives the reader a sense they are watching live action, not simply static images.  It’s really well-rendered work.

The key point of interest in Delta 13 #2 is the two female characters.  While the woman found in the asteroid is physically passive, her discovery forms the core of this issue.  The repercussions of bringing her aboard the ship will play out in future issues, and it seems likely that she and Sanders will be increasingly take up the lion’s share of the storytelling.  In the meantime, Sanders provides sensible advice while the men are gung-ho to explore the asteroid.  Unsurprisingly, she is ignored.  I highly doubt Sanders will pay the price, at least at first.

BOTTOM LINE:  A MUST BUY

I found Niles’ reboot of his seminal 30 Days of Night series a limp retread that amounted to very little.  In contrast, Delta 13 #2 is a bleak looking, tautly told story that ratchets up the tension from panel to panel.  Sure, it’s using elements familiar to anyone within even a passing knowledge of cinematic horror-tinged science fiction, but when it’s this seductively good, what does that matter?  This is a very strongly told issue that sets the rest of the series in motion.  This is a series that is definitely one to watch.

Delta 13 describes a slow-burning spiral into madness and betrayal as the cold reaches of space reveal their horrifying secrets in this taut thriller of man’s best intentions gone horrifyingly awry.