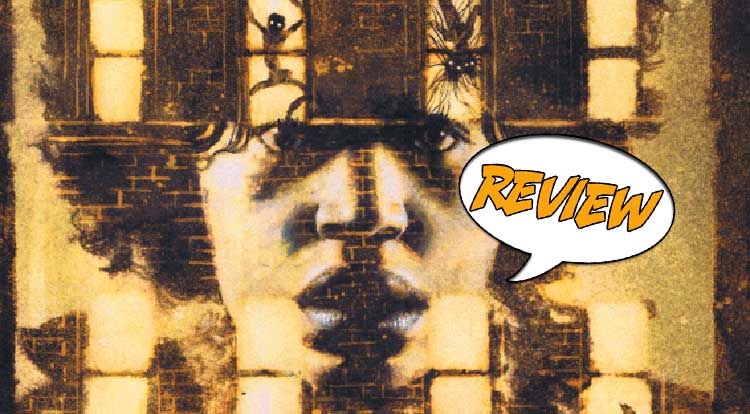 Everybody loves a haunted house story, populated by creepy shadows and strange beings driven with a lust to take human life.  Yeah, we’re all up for that.  And we love horror, even more, when the characters are diverse and realistic, along with their fears and hopes.  Infidel #4 provides plenty of thrills and chills, so let’s rejoin Medina and her friends as they venture back into the apartment building and face the dark terrors lying in wait! Previously in Infidel: Medina’s friend Aisha has seen her future mother in law killed and future stepchild hospitalized after a terrifying attack in their apartment building.  While Aisha grieves, Medina, with the aid of her friends Ethan and Reynolds, starts to piece together the dark background of their building, and its links to the dead occultist Arthur Quinn.

I don’t need to tell you, Dear Reader, that horror comes in all sorts of flavors.  My personal favorite is horror of the Lovecraftian style: nihilism seasoned with a bit of determinism, of cosmic horrors sleeping endlessly until the stars are right.  Not the slasher variety, though.  It’s all rather hysterical for my tastes.  Another personal favorite comes in the shape of movies like The Exorcist, or even The Omen, that infest the day to day concerns of their characters with lashings of Satan.

Infidel #4 and the series overall adopts that latter style of horror.  It’s not enough that the characters have to deal with the everyday horrors of work, or family strife, or even the casual racism that increasingly seems to infect public discussion.  It’s when the unknown, in the form of entities from the other side of the Veil, intrude into their lives, undermining families, putting children in peril, that the horror becomes much more tangible and damaging.

In Medina, the lead character of the series, we have a Muslim woman coming to terms with the hospitalization of her friend Aisha and the very real possibility that something evil has infected the apartment building they all live in.  With her flatmate Ethan, and neighbor Reynolds, the trio attempt to discover what menaces them all.

Infidel #4 is a highly entertaining issue, with multiple threads weaving in and out of each other.  Characters come together, flashbacks reveal more of the backstory and the evil begins to emerge center stage.   Writer Pornsak Pichetshote cleverly balances the mundane drama of a hospital visit, with Ethan and Reynolds’ meta conversation about the stupidity of entering what might be a haunted house.  Medina deals with her sadness over Aisha’s condition, while trying to understand what led to the tragic events in the previous issues.

A story like this can go easily off the rails; either crowding out the horror with the human drama, or falling into the trap of allowing the horror elements to overwhelm the rest of the story.  Pichetshote is cleverer than that and allows the pressure to build and build until the crushing final pages.

Special mention has to go to artist Aaron Campbell.  The artwork beautifully conveys the humdrum and the supernatural.  There’s an element of photo-realism to the character illustrations, but this is offset by some very effective intrusions of the supernatural in the center splash pages that really brings home the nature of the horror to the reader.  Setting the action at night and inside the apartment, as characters creep up and down the corridors and stairs, only serves to build atmosphere and tension.  And I can’t finish talking about the art without pointing out the cover illustration, which captures in one image all the elements of the issue.  Brilliant.

Infidel #4 allows the overall storyline to begin to cohere, as the focus shifts back to the apartment from the hospital.  Ethan and Reynolds’ reluctance to enter the apartment building is handled in a natural and sensible way, as is the explanation given for what might be causing the evil to emerge.  The careful plotting and pacing of the story is very well realized.  The info dump that comes partway through never feels too intrusive.  The payoff at the end, as Medina realizes how bad her situation really is, is satisfying.  And the cliffhanger arises naturally from these elements of the story coming together and doesn’t feel forced.

THE BOTTOM LINE – LOVED IT – BUY THIS NOW

There is much to admire in Infidel #4.  The unflashy artwork carefully matches the tone that Pichetshote works hard to develop.  The buildup to the cliffhanger never feels forced, and the horrific, when it comes, is a real gut punch, as it should be.  The atmosphere is unsettling and tense, while the strong plotting leaves the reader wondering how Medina will escape.  I can’t recommend this issue, and this series, enough.

Inspired by the psychological thrills of 70s horror films, Infidel #4 creeps up on you before leaping out and feasting on your frantically beating heart.